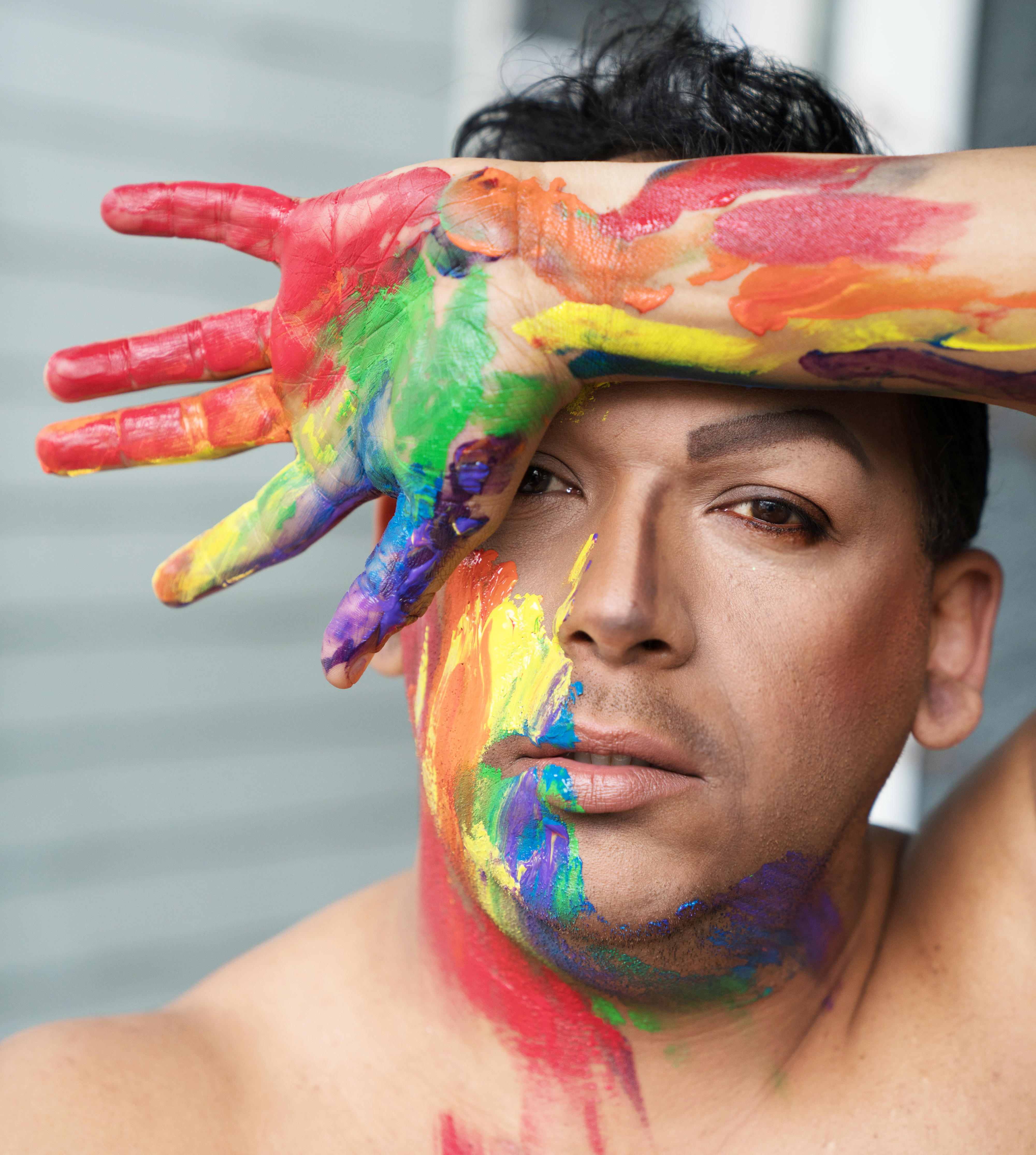 Sam Brett AS '97 (above) was crowned the first Miss RIT in 1995 under the gender neutral name Samantha Vega (below). 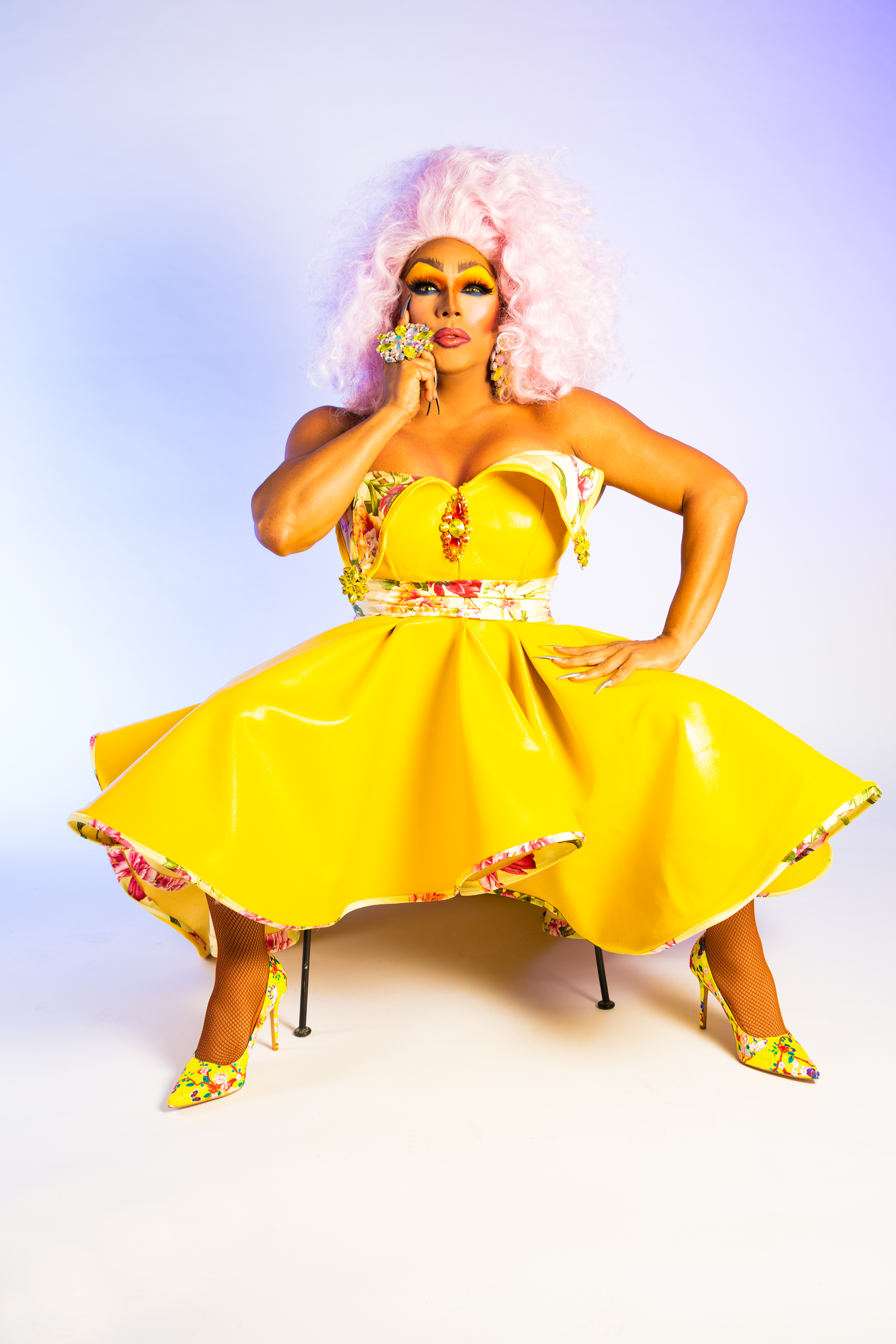 My name is Sam Brett (he/him/his). If I am in drag, I may be addressed as Samantha Vega. I've taken to being called Vega, because last names are gender neutral and I enjoyed that aspect. Also, I have coined the phrase "what happens with Vega, stays with Vega"

Sam Brett AS '75 (above) performs regularly in drag as Samantha Vega (below) or Vega for short.

What significance does Pride Month hold for you?

Having been an organizer for Rochester Pride for many years, Pride holds a special place in my heart. I remember being a young gay college student 25+ years ago, and attending my first pride parade and the impact that it had on me. It was very empowering seeing people just like me who were LGBT and not be afraid, and actually be celebrated. It showed me that it was okay to be the way I was. I want future generations to share the excitement of being accepted, and maybe for just one day be authentically themselves (if they are not accepted in their own homes or communities). Many of us have had the privilege of coming out and being safe. Many in our LGBTQ+ communities don’t have that luxury, and are not safe. Pride is a reminder that while we have come a long ways on equality (not quite there in equity) for LGBTQ+ folxs, there is still work to be done and many of our queer youth (and adults!) are still in danger and exposed to violence and abuse.

I remember the LGBTQ student group on campus used to meet almost secretly in my early college days (both secrecy and safety concerns), and it makes me so happy that RIT has evolved to celebrate Pride essentially all year long by having the Q center. When students are able to have a free environment in which they can be themselves, they are able to spend more energy in their college experience instead of just trying to survive.

Coming out is not a do-it-once and you’re done kind of deal. In a world where the assumed default is white-cis-heterosexual, you will find yourself coming out to someone essentially for the rest of your life. We might choose to not always disclose our identities because it is not always pertinent to the situations we encounter. Be safe, but above all, be YOU!

Take your time. Only you know when it’s safe to come out.

What's your favorite type of entertainment?

Being a drag queen myself, I love drag shows. There are many locally EVERYWHERE, so go out and find one. Drag entertainers are dancers, singers, makeup artists, clowns, and more!

I am also addicted to cooking shows, and own over 200 cooking books. When I am not working, you will probably find me cooking. There’s nothing in the world more relaxing than cooking. Cooking is my love language. If I am cooking for you, that means I am sharing my world with you.

Fun fact(s) about yourself?

I am originally from Caracas, Venezuela, but have lived in the United States longer than I lived in Venezuela. I have a brother, also a biologist, and a sister, a chemist, who both now live in the United Kingdom with their spouses and children. My parents are still in Venezuela, and we are trying very hard to relocate them from there due to the political, social and economic unrest in the region.

I was crowned the first Miss RIT (drag contest) back in 1995. Since then I have not stopped performing in drag under the name Samantha Vega. I was crowned Miss Gay Pride Rochester in 2006, Miss Gay Rochester in 2007, Miss Gay Syracuse in 2008, CNY Entertainer of the Year, Miss Gay pride Buffalo 2010, and Miss Salt City Drag Battle in both 2019 and 2020. I currently perform at ROAR nightclub in Rochester, and all over Western and Central New York. I started volunteering at the then-Gay Alliance of the Genesee Valley (now Out Alliance) back in 1997, and have continued to volunteer with them until now.

In 2015 I was designated by the Empire State Pride Agenda (ESPA) as one of the 25 Community Champions during their 25th anniversary celebrations. I was chair of ROC Pride through the years 2015-2017, and have been part of the pride committee for the past 12+ years.

I lost my husband (marriage equality was not passed yet) over 20 years ago to HIV/AIDS related complications. I made it a point to celebrate his legacy by volunteering and raising money for HIV/AIDS related causes. I’ve served on the boards of AIDS Rochester, AIDS Care, Trillium Health, and the MOCHA center for the past 15 years. Reaching positions of chair, vice-chair, treasurer, etc. I am very proud to have provided a voice for People of Color (POC) on those boards, and for fighting for improvements in health care and services for those infected and affected by the HIV epidemic.

I am a member of the Alpha Chi Sigma fraternity, Beta Sigma Chapter on the RIT campus, and I enjoy coming back to campus and spending time with the newer brothers, and reuniting with the old ones.

I used to be a Zumba instructor, and can't wait for fitness facilities to reopen so I can start that again.

Why did you choose to attend RIT?

At the time (1994) RIT was in the top five biotechnology programs in the country, and they also had a good ESL (English as a second language) program that could complement my academic experience as an international student, and the existence of International House in the dorms. The ultimate selling point for me was that RIT was in a quarter system that really maxed the diversity of courses for me, and the strong co-op program. Prior to attending RIT, I was able to correspond with alumni, students, and faculty as I had doubts about my program being a match for my long-term goals at the time. They all made me feel like I belonged. I felt like a Tiger before I was even on campus!

Who influenced you most during your time at RIT?

I was very young when I started at RIT (I turned 17 during my freshman year). So I grew up and became an “adult” while on campus. I was able to be authentically myself thanks to the help of many people. I thank Dr. Ed Cain (R.I.P.) and Dr. Irene Evans (R.I.P.) for not only allowing me to be myself, but for celebrating me in the many intersections of my identity. Being queer in the sciences is not easy, especially when being a flamboyant effeminate cis-man. They taught me that it was okay, that my work spoke for itself (even if I was not a very good student). Working in Dr. Evans’ lab helped me both on a professional and a personal level. I learned that science is not one-dimensional and that we can influence people with our knowledge. I was a teacher’s assistant (TA) for the biology department for about six quarters, and I loved every second of it. I knew that I was an educator from the second I joined my first TA session.

In my time at RIT I was also an RA and met so many colleagues with whom I am still friends and cherish each other’s lives. Also, big thanks to all the staff in Residence Life who were my parents during those four years on campus. Jennifer S., Sarah W., Wendy H., Elliott, Carol Reed, Ron P., and many more. Being an RA exposed me to so many cultures and interpersonal relationships, and it helped me learn sign language!

Finally, I had many queer role models and allies on campus that helped me navigate the sometimes-harsh world out there. Many supported me through battling homophobia (and transphobia) on campus. Many helped us grow our LGBTQ+ alliance and helped us get funding. Many faculty and staff stood up for me when I was treated unfairly by staff due to my identity/orientation. Times have changed and college campuses have evolved for the better.

How did your RIT education prepare you for what you are doing today or how did RIT influence your career path?

I learned through my education at RIT that I did not particularly want to work in corporate biotechnology (I did, but didn’t care for it) and that my education was not wasted because we all had options. I was a teacher in Massachusetts for a couple years, and I also taught high school in the Los Angeles Unified School District. I eventually landed a school program director program for an environmental education facility in Massachusetts that solidified my love for curriculum development and working in the non-profit sector.

What advice do you have for current students who want to make the most out of their RIT experience?

Get an on-campus job, join a research lab, join every club you can think of, make mistakes. Every experience is an opportunity to learn, to get to know other people, and get to know yourself.

What advice would you have for your 18-24 year old self?

Try to find the balance between your social life, your jobs and your studies!