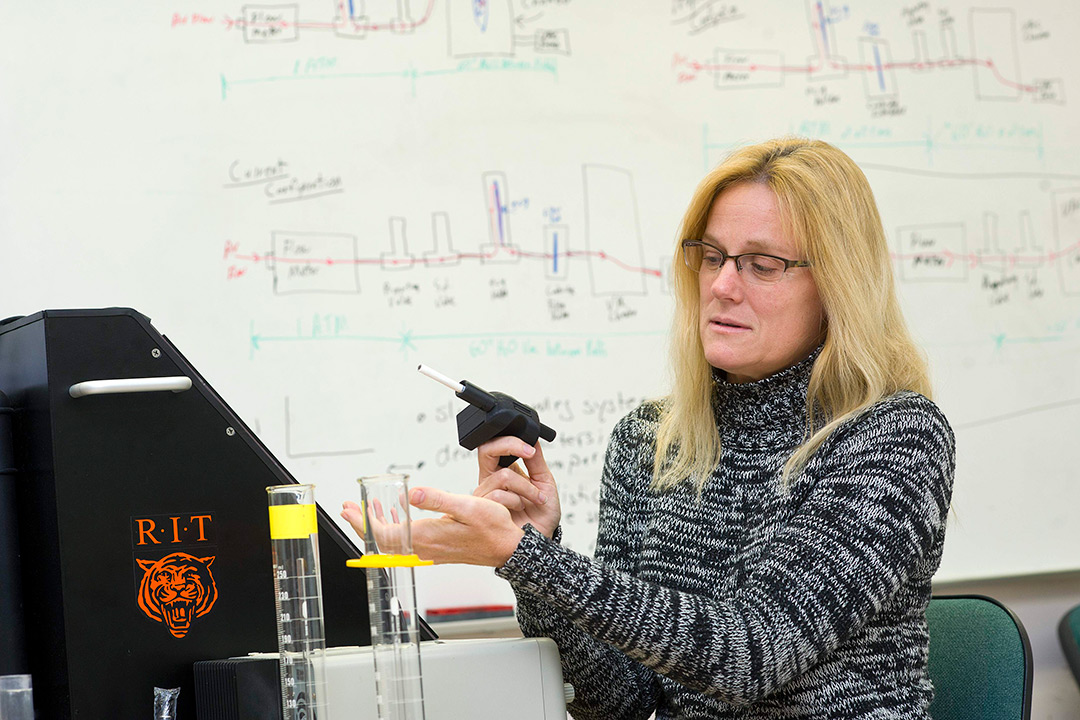 Risa Robinson, professor and director of the Respiratory Technology Laboratory, studies the safety of different types of e-cigarette devices and flavored juices.

Risa Robinson has taken a different approach to assessing e-cigarette usage, and it’s turned up some attention-getting results.

Robinson studies users in their own environments, puffing on their own e-cigarettes, rather than on test machines in lab settings. And what she’s found is that they are puffing as much, if not more, than traditional cigarette users, resulting in potentially higher exposure to harmful substances.

Her team’s work on the safety of different types of e-cigarette devices and flavored juices is among the foundational information the Food and Drug Administration (FDA) is seeking to regulate e-cigarettes.

“Over the years, we’ve been trying to figure out whether these electronic cigarettes were actually safer products,” said Robinson, a professor of mechanical engineering in RIT’s Kate Gleason College of Engineering. An expert in fluid dynamics and particle deposition, she researches the effects of cigarette smoke on lungs and moved naturally into assessing the effects of e-cigarettes as this alternative became more popular.

Early experiments on e-cigarettes, done mostly in labs, predicted lower emissions from a single puff. The problem Robinson noted was users were not actually puffing that way. When she began research into the health risks of e-cigarettes, she found there weren’t adequate tools to collect the data she needed. So as a mechanical engineer, she just built her own.

E-cigarette devices have evolved since they were first introduced more than 10 years ago, and Robinson’s lab team has produced a variety of ergonomically designed monitors that collect important information about usage and emissions.

“We have monitors that we’ve developed that can track puffing by day, time and amount, and we can figure out the characteristics of every puff taken over time. From this we can determine exactly what exposure a user is getting and what specific constituents they are being exposed to. This helps us determine if a current or emerging product is actually low risk,” she explained.

Tests in a lab setting, on a machine that simulates smoking, might show two comparison products looking identical in safety standards. But when the products are used in the field, by actual users with the team’s original monitoring device, a wireless Personal Use Monitor (wPUM), data collected includes important behavioral cues such as use frequency, duration and volume. Research is showing that supposedly safe products in reality are not.

“Use behavior is key. What we are trying to do is get our behavior data into the regulation, so that we can show a more meaningful assessment of risk,” said Robinson.

It’s a challenge to keep up with the rapidly changing marketplace, said Ed Hensel, professor and associate dean for research in the engineering college. He has been with the project team for four years and involved in the development of new monitoring devices and data analysis. “There are needs for these different high tech monitors to support researchers because there are always new products.”

With the data from the Centers for Disease Control (CDC) showing a rise in vaping even among young teens, the guidelines on sales, issued by the FDA this past fall, have been strengthened to prevent under-age smoking. Use by peers or a family member (39%), availability of flavors (31%) and the belief that they are less harmful than other forms of tobacco (17%) were the top reasons students gave in the recent CDC survey for why they use e-cigarettes.

The FDA is particularly interested in Robinson’s work to bridge a connection between electronic cigarette characteristics and health effects. Earlier generations of e-cigarettes were not very effective at aerosolizing the nicotine-laden e-liquid, and therefore a very small amount of nicotine was consumed by users. Users also found these earlier devices unsatisfying, she said.

“But as our work demonstrates, current electronic cigarette devices are well-suited to delivering large amounts of e-liquid to the users, and in many scenarios, users are consuming more nicotine per puff compared to combustible cigarettes,” said Robinson. “Our work also shows that electronic cigarette users have very different use patterns compared to combustible cigarettes. A cigarette smoker may take 10 puffs from their cigarette and then stop until a few hours later. E-cigarette users are able to, and many do, vape continuously without restriction. New e-liquid formulations result in a smoother throat hit, and pleasing flavors further incentivize use.”

The base e-liquid, which is typically a mixture of propylene glycol and glycerin (a sweetener) is also being manipulated by the manufacturer and the users to control the fell of the aerosol when it hits the mouth and throat. When these additives are heated, the e-liquid breaks down into harmful constituents that were not present in the pre-vaped liquid. Flavor additives that might have been approved for ingestion have not been approved for inhalation, she explained.

Robinson and the team in her Respiratory Technology Lab continue research to understand the long term health effects of these flavored liquids and have widened their range of work to include multiple types of e-cigarettes, including the popular Juul, and have also begun studies about the use of hookahs, or water pipes. 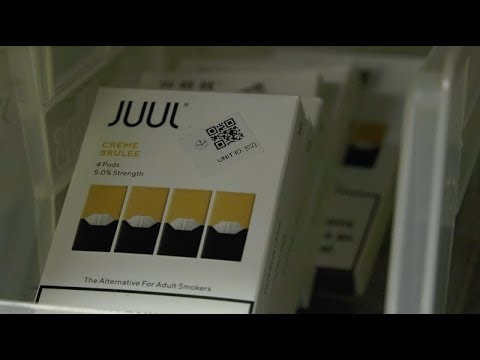