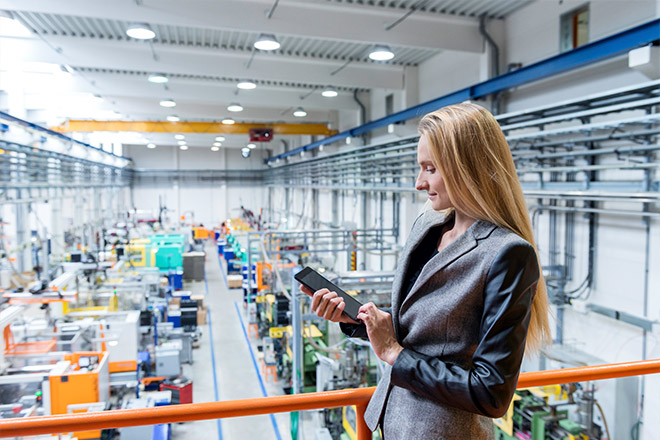 Automation, which includes the use of robots and other high-tech means, has had a significant impact on the nation’s manufacturing industry. With its ability to improve quality and speed and decrease costs industrywide, automation is the present and future of manufacturing. And while it has displaced working-class production jobs, automation has simultaneously created a shortage of qualified manufacturing engineers. According to the U.S. Bureau of Labor Statistics, the annual deficit is between 50,000 and 100,000 and growing. This shortage is creating a ripe opportunity for students enrolled in RIT’s mechanical and manufacturing engineering technology programs.

Two yellow, heavy-duty industrial robots, donated to RIT by General Motors in 2015, loom large in one of several manufacturing labs filled with a variety of robotic equipment. The two Fanuc R-2000iA/210F robots are among a collection of manufacturing assembly and production systems that are used to instruct students on an assortment of manufacturing and automation processes. The GM donation adds an important piece to the larger manufacturing system at RIT. With the addition of the GM robots, the university has a complete, in-house manufacturing production and assembly system.

“There’s nobody in the world that has the robotics system, the surface-mount assembly system, the metrology lab system and the CNC manufacturing system that our department does,” said Robert D. Garrick, professor and acting chair of the manufacturing and mechanical engineering technology department.

The value of this comprehensive, hands-on system is twofold. First, it is preparing students to embark on in-demand careers as manufacturing engineers, process engineers, or quality engineers in an industry that is rapidly changing. Second, the all-encompassing system is providing research opportunities, including those that explore intelligent systems, which extract data from manufacturing robots that is used to inform productivity, quality improvements, and more.

The impact of having an entire manufacturing system available to students is powerful. It gives them the rare chance to engage in all phases of manufacturing, automation, and production, said Garrick.