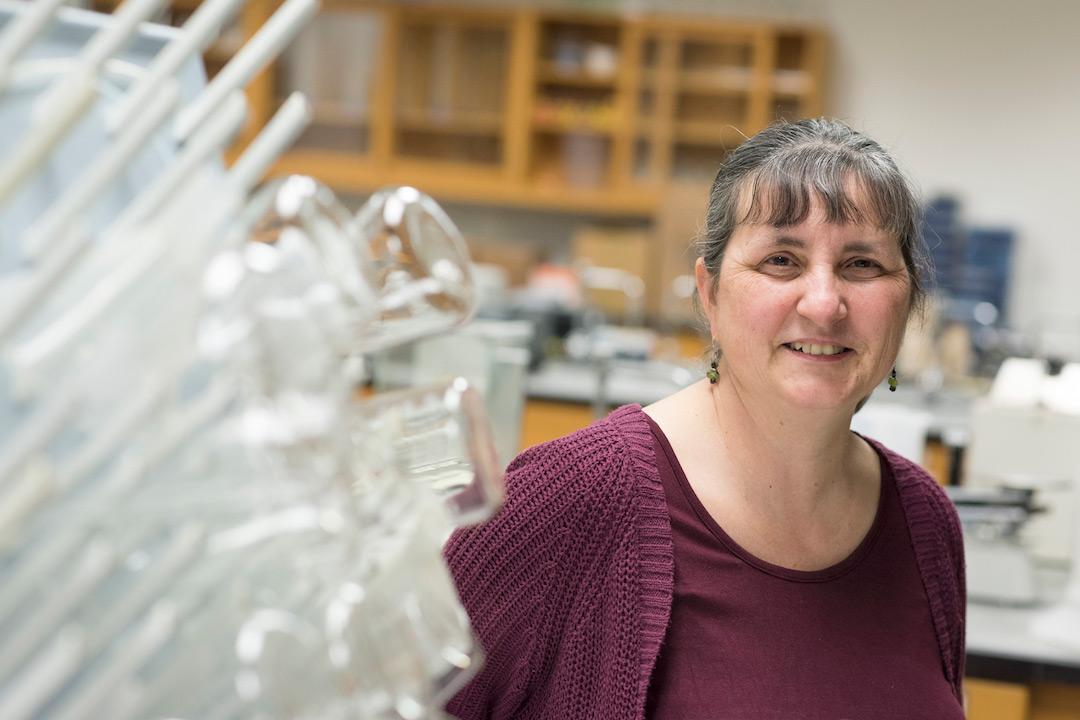 Rochester Institute of Technology Associate Professor Suzanne O’Handley has been selected by the Council on Undergraduate Research and the Goldwater Scholarship Foundation as the 2019 CUR-Goldwater Scholars Faculty Mentor Awardee. O’Handley, a faculty member in RIT’s School of Chemistry and Materials Science, was chosen from 10 finalists for her considerable achievements as a dynamic scholar, teacher and mentor.

“It is such an honor to be recognized for the two things that have been most important to me in my career: mentoring of my undergraduate and master’s research students, and initiating and running the RIT Goldwater Scholars program,” said O’Handley. “I hope to use this recognition to continue to advocate for undergraduate research, mentoring and fellowships. Sharing my excitement about science, exploration and discovery, and helping students take advantage of opportunities to reach their full potential, have been a major focus of my career.”

The Goldwater Foundation provides scholarships to college sophomores and juniors who intend to pursue research careers in the natural sciences, mathematics and engineering. The goal is to ensure that the United States is producing the number of highly-qualified professionals the nation needs in these critical fields. O’Handley launched RIT’s Goldwater Scholars program in 2004 shortly after joining the university as a faculty member. Since then, RIT has had 28 Goldwater Scholars and seven honorable mentions. Before O’Handley assumed the campus representative position at RIT, the institution had no Goldwater Scholars and one honorable mention.

John Mateja, president of the Goldwater Scholarship Foundation, said: “Dr. O’Handley’s outstanding record mentoring six students who were named Goldwater Scholars, her 15 years of service as Rochester Institute of Technology’s Goldwater campus representative, and her involvement of 65 undergraduates in research in her laboratory made her the consensus choice of the CUR-Goldwater Scholars Faculty Mentor Award selection committee for the 2019 award.”

O’Handley’s undergraduate mentees have garnered numerous grants, fellowships, admission to distinguished graduate and professional programs, publication and presentation opportunities for their research, and success in the workplace. She will receive the award, which consists of a plaque and $5,000 for her research program and/or undergraduate researchers, at the National Conference on Undergraduate Research at Kennesaw State University in April.

“Dr. Suzanne O’Handley is an exceptional leader and mentor, and I’m thrilled that she’s the recipient of the 2019 CUR-Goldwater Scholars Faculty Mentor Award,” said RIT’s Provost and Senior Vice President for Academic Affairs Ellen Granberg. “Under Dr. O’Handley’s guidance, she has encouraged scholars to find new and meaningful ways to move the world forward. Her commitment to excellence has made a positive impact on our university. At RIT, we pride ourselves on being an incubator for the exceptional and the fruits of Dr. O’Handley’s mentoring are truly an example of that.”