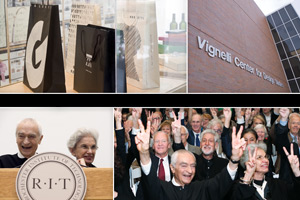 Center inspires next generation of designers

Massimo Vignelli describes it as a dream in gestation for nearly 30 years.

The world-renowned modernist designer finally witnessed the birth of that dream Sept. 16 as RIT officially unveiled the Vignelli Center for Design Studies.

Vignelli and his wife and design partner, Lella, spurred the creation of the center by donating their archives to the university to allow future generations of designers to study and learn from their work.

Family, friends and colleagues of the famous modernist designers flew in from Italy, Germany, New York City and Los Angeles to attend the dedication ceremony. The 19,000-square-foot facility is adjacent to James E. Booth Hall.

“I think this center is vital to preserving the legacy of two of the world’s most influential design icons, Massimo and Lella Vignelli,” says Rob Englert ’09 (industrial design), founder of ram industrial design inc. in Syracuse, N.Y. “Their work is the epitome of interdisciplinary design collaboration and is a perfect example of how this process can create results that transcend time. This is a pivotal moment in the history and future of RIT.” 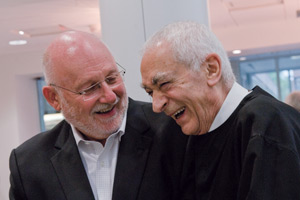 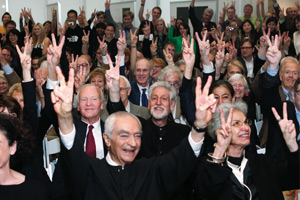 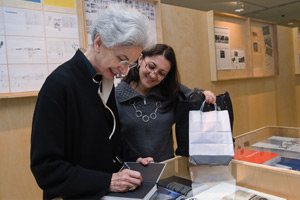 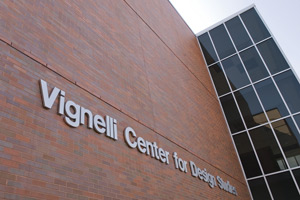 Exterior shot of the Vignelli Center for Design Studies.

The center’s architecture, comprised of two geometrical cubes, one made of glass and one made of brick, symbolizes the modernist, simplistic design philosophy of the Vignellis. The construction project cost nearly $4 million.

The glass cube features exhibits of the couple’s corporate identity campaigns, including their work with Xerox, American Airlines, Bloomingdales and Ford Motor Co., furniture, silverware, glassware, and some of their other product designs. The work is on display in the Benetton Gallery. The brick cube houses the Vignellis’ extensive archive.

“It’s just what RIT’s School of Design needs for exhibit space and reflects the beliefs of graphic designers,” says Paulina Garcés Reid ’02 (graphic design), freelance graphic designer from Penn Yan, N.Y. “With a name like the Vignellis standing behind this center, I think it will catapult the design school and the university.”

The archives will allow students, visiting scholars and professional designers hands-on access to the Vignellis’ original source materials and finished products. The archives will supplement RIT’s curriculum in programs such as graphic design, industrial design, interior design, 3-D digital graphics, new media design and imaging and computer graphics design. In addition to the building and the archives, the new center will spur educational programming initiatives, including conferences, a guest speaker series and a future master’s degree program in design studies.

“The degree would focus on the history, theory and criticism of design that again follows the Vignelli philosophy, utilizing the archival resources that we have,” says R. Roger Remington, Vignelli Distinguished Professor of Design. “RIT is one of the few schools, if not the only school, in the world that has a place where design students learn about the history of design from real artifacts. They are not looking at slides or photographs, but working with the real book, the real model, the real production piece.”

For students, access to the Vignellis’ archives is a privilege. Cassandra Angerosa, a fourth-year graphic design student from Utica, N.Y., spoke at the ceremony on behalf of the school’s student body.

“We represent just the beginning of the generations of students who will grow and succeed because of the Vignellis’ mission to pass on their timeless knowledge through the center.”

Overcome with emotion at times during the ceremony, the Vignellis too are sometimes still in disbelief.

“The event was quite moving,” says Massimo Vignelli. “It’s a dream come true. Sometimes I can’t believe the center is real.”