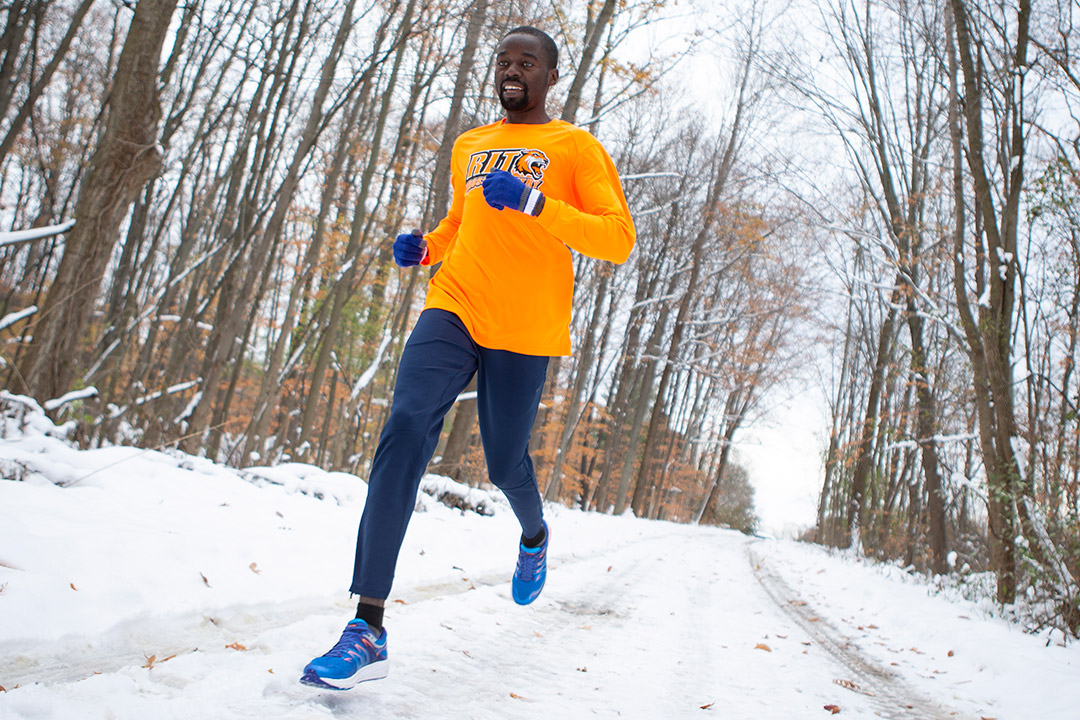 Student-athlete Hassan Eissa traveled from Chad as a young man, first across northern Africa as part of a caravan, then into Libya and Egypt before emigrating to the U.S. He will be the first person in his family to earn a college degree.

Running an 8-kilometer cross country race is hardly a challenge if you’ve already walked across the Sahara Desert.

Hassan Eissa has a life journey that reads like a Hollywood script – born in Chad, left home at an early age, traveled across the continent before making his way as a refugee to the United States. And he has a résumé to match – shepherd, transporter of camels – and now engineering technology student and standout cross country runner at Rochester Institute of Technology.

“It wasn’t easy for me to go to college without being supported by my mentors when I first came to America,” said Eissa, thanking the many people who helped ease his way.

Eissa said he knew from a young age that he would leave his North African village and seek his fortunes. He’d follow the traditions of his community, and it led to new experiences as well as some challenges.

Chad is both mountainous and temperate in areas as it extends north into the vast drier expanse of the Sahara Desert. Home to several nomadic societies, the country borders Libya and Sudan, with Egypt to the northeast. Eissa came from a large extended family, and he lived for a short time with his grandmother, helping manage her herds. He enjoyed that independence, and although he was happy with his family, he was drawn to seeing the rest of the world, to learn new languages and perhaps start his own business.

“I was young and I didn’t tell anyone except my half-brother that I was leaving. If I told them they may not let me,” he said, remembering the morning in 2006 the two boys left for the countryside where they tended the family’s sheep and goat herd. He asked for two of the animals to trade for a ride into a nearby city. “My brother didn’t refuse. ‘Hassan,’ he said, ‘I will give you the sheep. I will tell our family that they just got lost.’”

His first stop was a small village nearby where he went into a makeshift restaurant for a meal. When he went back outside, the sheep were gone. And he was alone.

“I walked that night. I grew up with mountains on all sides, but the night was a little bit scary,” he said. “But I was determined to leave.”

In 2008, he joined a caravan taking camels from Chad into Libya to sell.

“It was exciting,” he said of that first trip covering more than 750 miles. “I was the youngest, there were seven of us, and we had 400 camels together. It took us 16 days walking because you cannot rest too much.” He said there were breaks, at noon and midnight. It was important to keep moving or risk injury, even death, because of the harshness of the desert with so little water or shade and blazing heat.

Eissa was with the caravan for a few years and made several trips between Chad and Libya. One trip in 2010 landed him in the middle of Libya’s civil war. The caravan lost the camels; its herders, regardless of age, were suspected of supporting the Khaddaffi government even as it was being overthrown. Some wanted to return to Chad, but Eissa was determined to continue. With just the clothes on his back, he headed east to Egypt, joining thousands fleeing Libya to border refugee camps. By chance, he came upon one administered by the United Nations, and he saw it as a chance for passage out of Africa through refugee resettlement.

“After the first year, we started to believe we were going to a new country,” he said. He taught himself the English alphabet, asking for help from case workers in the camp to translate words. “We are going to America, and we have to teach ourselves if we are going to this new world.”

In 2013, Eissa was allowed to go to Baltimore where he would live with other African refugees who were starting new lives in the U.S.

As a very young child, he had herded for his grandmother and did not attend his village school. Now in the U.S., with no formal education, limited English, but a great desire to learn, Eissa told a case worker that he wanted to go to school. He started classes through a vocational school, eventually earning his high school equivalency within three years.

“I had started thinking, I can start an entry level job or go to school. If I succeed, I can go to college,” he explained. “America is a country with good opportunities. I wanted to go beyond, I wanted to go forward.”

Eissa applied and was admitted in 2016 to Harford Community College, in Bel Air Township, a few miles north of Baltimore. As the recipient of an Alpha Phi Alpha Fraternity scholarship, he met the scholarship donors, and they would become his host family while at HCC.

His own resourcefulness played a part in his successes and opened doors: “Opportunities are not always presented but one can only work hard to gain them,” he said.

At HCC, he asked the cross country coach for a try out even though he had never been on a team. Despite his inexperience, he rapidly advanced with the team to regional and national championships. In 2018, he began coursework in engineering technology, and he applied to nine four-year colleges. He was accepted at all of them, and he chose to attend RIT.

The third-year electrical engineering technology major in RIT’s College of Engineering Technology came to the university this past fall. He is excelling in classes and intends to use his degree to become part of the solar energy industry. He is also part of a strong men’s cross country team at the university.

“We have an interesting dynamic this year in that our two best runners are not competing for us because they are on co-op. Our team knew that, we had planned for it, and in comes Hassan and another transfer student who are our number 1 and 2 runners. I think we are a better team than anyone would have expected,” said David Warth, head coach of the RIT cross country team and the men’s and women’s track and field teams. Over his 23-year career, he has seen the teams recognized with academic honors as well as national championships.

Eissa came to the coach’s attention late in the summer before the 2019 academic year, but after a conversation with him, learned of his interest to continue running competitively, and more importantly to be part of a team—its structure and sense of community.

“It became clear to me that he was all in. He’s incredibly disciplined, and so cross country, when it is done well, it has a certain structure and discipline to it, he fits that and enjoys that aspect, really revels in that,” Warth added.

In September, Eissa was named the Liberty League’s Male Runner of the Week for outstanding performances in several fall invitational events. His times in the 8-kilometer race have improved from 26.30 to 25.44, and he has every intention of bettering that time.

“I am a determined person; I have been independent since I was 15, I went through so many of the hardest tasks already — surviving a war, coming to America, seeing different places,” he said. “When I look back to my past, my story and my life, it encourages me that I have come so far.”

His family remains in Chad, and he has not seen them for nearly 12 years. When he spoke to his mother not so long ago, at first she did not believe it was really him.

“Because I did not have a connection with them, they have no phone, my family thought they lost me in the Libyan war. My mom asked why I ran away,” he said. “I know that to a mother, her son not coming back was not a good feeling, but I asked her, ‘Forgive me. One day I will come back.’”

He also talked to his half-brother and reminisced about the stray sheep. It turned out that the two he was given to trade for passage weren’t eaten by wolves as Eissa had imagined. They found their way home, something he expects to do one day.