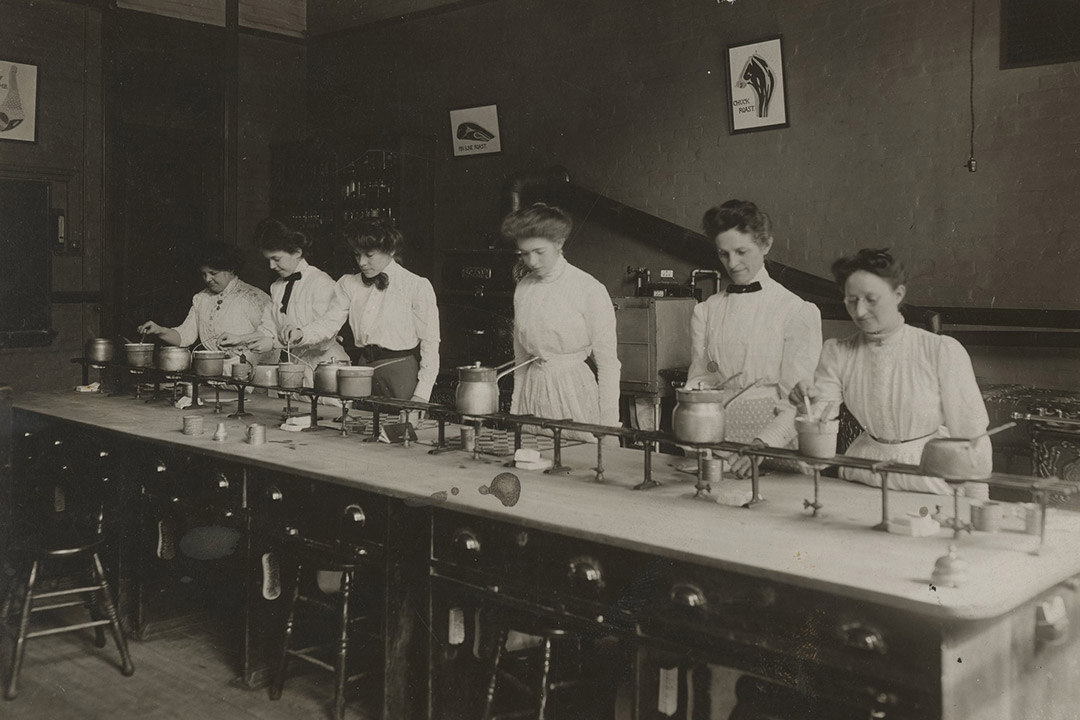 A group of unidentified female students study in a Food Analysis course, most likely part of the cookery division of the Mechanics Institute’s Department of Domestic Science and Art. RIT Associate Professor Corinna Schlombs and RIT University Archivist Liz Call will virtually join experts from around at the Mechanics’ Institutes Worldwide 2021, a free virtual conference on Oct. 15 honoring the 200th anniversary of the founding of the first Mechanics Institute in Edinburgh, Scotland. Registration for the conference is now open.

Registration is open for Mechanics’ Institutes Worldwide 2021, a free virtual conference on Oct. 15 honoring the 200th anniversary of the founding of the first Mechanics Institute in Edinburgh, Scotland.

RIT Associate Professor Corinna Schlombs, Department of History, College of Liberal Arts, and University Archivist Liz Call, RIT Archives Collections will virtually join experts from around the world as they share knowledge on the start of the Mechanics’ Institute movement in the 19th century, the diversity of the early Mechanics’ Institute movement, its consolidation through to the 20th century, and what the movement represents today. In addition, RIT Senior Vice President for Academic Affairs and Provost Ellen Granberg serves on the international advisory committee.

Schlombs will present “Giving women a practical education: Domestic Science at Rochester Institute of Technology,” which looks at the opportunities that RIT opened for women at the turn of the 20th century and elicits questions about women in technical institutes today.

“Many scientific and technical disciplines have been historically closed to women, and just over one-third of RIT students today identify as women,” explained Schlombs. “It may be surprising that 100 years ago, women outnumbered men at RIT. Many of them studied in the Domestic Science department, preparing themselves for careers as teachers in local schools, or for work in hospitals or other large kitchens.”

Call will present “Stewarding RIT’s Historical Record: Reconstructing the Extraordinary Lives of Ordinary People,” sharing stories woven together from donated collections and artifacts of several unsung heroes that are represented in the collections they steward. Through examining RIT’s almost 200-year history, according to Call, one discovers the unheard voices of alumni, faculty, and staff whose lives were shaped by attending RIT.

“Many of their stories were only preserved thanks to archivists becoming intimately acquainted with those people through the curation, preserving, and processing of personal letters, journals, notebooks, and photographs, thus ensuring that the ephemeral nature of their experiences are heard for future generations to come,” said Call. “By sharing from the myriad of narratives held in the RIT Archives, we will illustrate the influence and spirit of the Mechanics Institute of Rochester, N.Y., which RIT continues to enhance and fine tune.”

Launched in 1821 by Leonard Horner, the Mechanics Institute was a first-of-its-kind organization and the direct descendant of the School of Arts in Edinburgh. The institute was primarily for the instruction of mechanics in the field of physical science, along with practical applications of their trades. The first set of classes included chemistry, natural philosophy (mechanics), architecture, and farriery, a specialty in equine hoof care, with mathematics added the following year. English, French, and drawing were added shortly after.

But more than that, according to the conference website, these institutes also transformed societies, enabling social mobility and economic development, but also enhancing civil society in cities and rural regions.