Dr. Michael Zemcov is an experimental astrophysicist at the Center for Detectors of the Rochester Institute of Technology whose scientific background and interests are centered on cosmological observations including studies of diffuse radiation in the cosmos, particularly the cosmic microwave and infra-red backgrounds. Currently, his focus is on the measurements of cosmic large scale structure, the epoch of reionization, secondary anisotropies in the cosmic microwave background, and the history of the star formation in the Universe. Dr. Zemcov has extensive experience with instrumentation, observation and data analysis throughout the electromagnetic spectrum from the optical to the radio, with particular emphasis on the infra-red and sub-mm/mm regimes. He is currently involved in a number of projects in a variety of roles, ranging from technology development to the scientific interpretation of data from mature instruments.

The Extragalactic Background Light (EBL) is the combined brightness from all sources of light along a line of sight through the Universe, when the light from our solar system and own galaxy is excluded. The physical processes responsible for the production of these photons vary. In the near infrared (IR), the EBL is due to the light from all the stars in the Universe, so tells us a great deal about the baryons and nucleosynthesis across cosmic time, while in the far IR (FIR) the light arises from cold dust during star formation. The plot below shows the EBL’s relative brightness over the entire observable electromagnetic spectrum. Various peaks are visible, each corresponding to different physical processes in the universe. 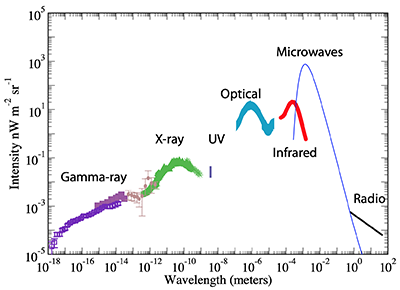 The part of the spectrum with the most energy density - the largest peak on the plot - is around 1 mm; this is the cosmic microwave background radiation (CMB), which is the earliest light we can see in the universe. At shorter wavelengths than the CMB, labeled 'Infrared' in this plot, the light predominantly comes from dusty galaxies in the distant Universe that are vigorously forming stars at a fantastic rate. At shorter wavelengths still, labeled 'Optical' in the plot, the light is due to the light collectively emitted by all of the stars in the Cosmos. FIRAS on COBE measured the FIR EBL spectrum to amazing accuracy; various projects I work on are aiming to do the same in the Optical and Infrared, particularly at wavelengths that are currently not so well understood.

Our research group is a world-leader in the field of spectrophotometric measurements of the EBL at a wide range of wavelengths.  The spectrometric channels on CIBER-2 will measure the near IR EBL in the highly contentious range 0.6 to 2.2 microns, which is important as it straddles the expected peak in the EBL arising from stars in the universe. At visible wavelengths, we are using archival data from the LORRI instrument on New Horizons to estimate the optical EBL. In addition, we are working on a small instrument to measure the IR background from a distant vantage point in the solar system to fly as part of the Interstellar Probe science payload.

The epoch of reionization was the era during which the first population of stars in the Universe, seeded by the same over-densities visible in the CMB, ionized the neutral hydrogen then ubiquitous in the Universe. The epoch of reionization is at the forefront of current cosmological research. The details of the process, such as when it began, how long it took, and what class of sources produced it, are not well understood. The image below shows our current understanding of the process of structure formation over cosmic history, and displays the epoch of reionization that began roughly 500 million years after the big bang and was complete about 500 million years later. 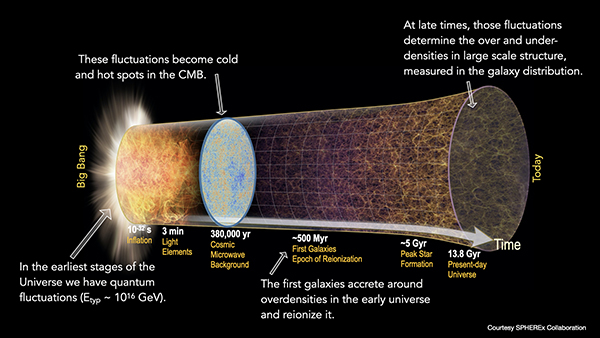 A promising way to study the epoch of reionization is via the fluctuations it causes in the infra-red background. Several of the projects I am currently involved with are searching for these fluctuations, which will allow a much better understanding of the generation of the first galaxies in the Universe and the processes which led to them.

The Cosmic Infrared Background Experiment (CIBER) is a sounding rocket borne experiment which is optimized to search for the signatures of reionization in the near infrared background. With its first flight in early 2009 and second in the middle of 2010, the CIBER payload has been extremely successful. The continuation of this project, CIBER-2, has been qualified for launch and will fly in 2020. The photograph below shows team members C. Nguyen and M. Zemcov in front of the CIBER-2 instrument integrated into the Black Brant IX rocket payload during pre-flight tests at Wallops Flight Facility, Virginia. 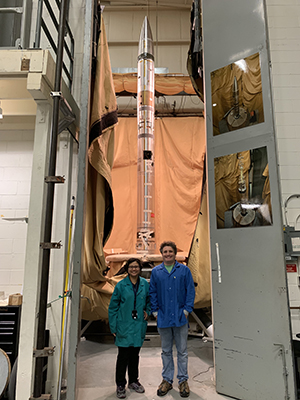 CIBER-2 is specifically designed to help disentangle the reionization signal from emission from all of the galaxies closer to us. One of the primary CIBER results has been unexpectedly bright large-angle fluctuations at wavelengths of 1.1 and 1.6 microns, which may be identified with stars flung outside of galaxies or other new populations that result from large-scale structure formation. The CIBER-2 data set will give us our most complete view of the near-IR background to date.

Building on CIBER, SPHEREx, the Spectro-Photometer for the History of the universe, Epoch of Reionization, and ices Explorer, is an upcoming NASA Mid-scale Explorer mission (MIDEX) that will perform an all-sky spectral survey over the entire NIR wavelength range. SPHEREx is designed to map the large-scale structure of galaxies in the universe to help study the process of inflation, measure the light produced by stars and galaxies over time by using multiple wavelength bands to study galaxy clusters, and investigate how water and biogenic ices influence the formation of planetary systems by studying the abundance and composition of interstellar ices. Our group is at the front lines of this mission, currently helping to design the science case and data analysis pipeline ahead of a launch expected in 2024.

The epoch of reionization is also being studied in the sub-mm with the Tomographic Ionized-Carbon Mapping Experiment (TIME), a multi-pixel cryogenic grating spectrometer using superconducting bolometers. TIME will make line intensity maps of the redshifted 158 micron line of singly ionized carbon emitted by early galaxies as a result of star formation processes. A new technique called line intensity mapping allows TIME to reach galaxy populations fainter than that of other instruments, and detect crucial ionizing systems such as dwarf and dust-obscured galaxies that may have been missed in other surveys. The TIME team, which includes group members V. Butler and M. Zemcov photographed below, completed the first engineering run at the Arizona Radio Observatory 12 meter telescope at Kitt Peak, Arizona in March 2019. TIME is set to return to the KP12m telescope in winter of 2020 for a dedicated science run with a full set of 2000 detectors. 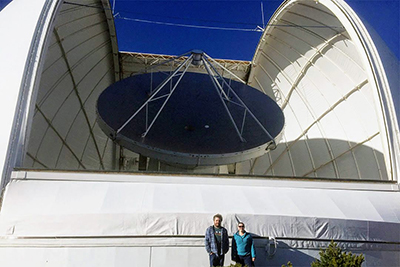 The Sunyaev-Zeldovich Effect describes the scattering of cold cosmic microwave background photons off hot gas in the atmospheres of galaxy clusters. The SZ signal changes brightness with the mass of the cluster, but does not change as a function of redshift. This makes it an excellent tracer of large structures in the Universe, since it can be used to characterize the properties of a cluster at any distance.

The Spectrum of the SZ Effect 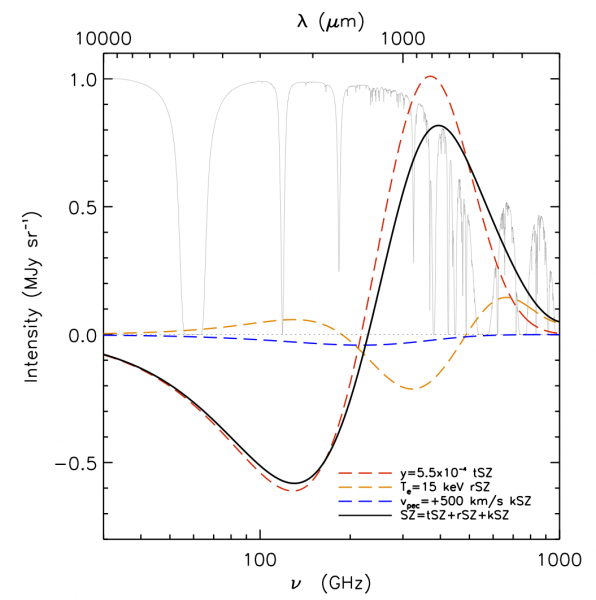 I have concentrated much of my SZ research on making measurements of the spectrum of the SZ effect, particularly in the sub-mm regime where it is an increment in the CMB temperature. These are challenging measurements, since there are very few ways to make small cold spots on the CMB background, but many to make small hot spots (including all of the sub-mm and radio sources in the Universe). However, the potential payoff is rewarding: subtle changes in the scattering physics due to the state of the electrons in the galaxy cluster atmosphere cause changes in the electromagnetic spectrum of the SZ effect. Though small, these changes can allow measurement of the temperature and velocity flows within the cluster medium, and even a measurement of the velocity of the cluster with respect to the CMB rest frame. These are shown in the figure above in the gold and blue lines; the region where this effect is largest is in the SZ increment. Though still an emerging field, these kind of measurements provide tight constraints on structure formation in the Universe which are independent of other measures.

I am currently leading efforts to measure the SZ effect using instruments like Herschel-SPIRE , Z-Spec, and SCUBA-2 . The ultimate goal of this work is to map the SZ effect spectrum in many clusters, which will allow measurements of the spectral corrections to the SZ shape. Not only will this yield astrophysical and cosmological information, but also inform new instruments and measurement strategies as we progress.

Michael Zemcov is a research professor at the Center for Detectors and the School of Physics and Astronomy whose primary focus is experimental astrophysics.  His research centers on instrumentation for cosmological observations, including the cosmic microwave and infra-red backgrounds. He develops instruments and data analysis methods for a variety of platforms, including ground-based, sub-orbital rockets, and orbital observatories.  Currently, his scientific focus is on the epoch of reionization, secondary anisotropies in the cosmic microwave background, and studies of the history of the star formation in the Universe using novel techniques and experiments. He has extensive experience with instrumentation, observation and data analysis for astrophysics throughout the electromagnetic spectrum from the optical to the radio, with particular emphasis on the infra-red and sub-mm/mm regimes. His research group is currently involved in a number of projects in a variety of roles, ranging from technology development to the scientific interpretation of data from mature instruments. 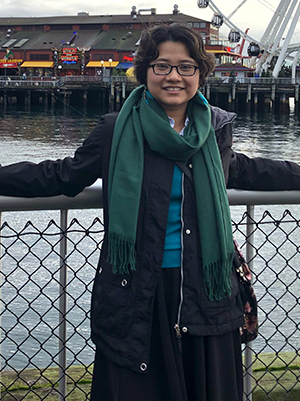 Chi Nguyen is a 5th year Ph.D. student in the Astrophysical Sciences and Technology (AST) program, NASA Earth and Space Sciences Fellow (2017 - 2020), and a member of the RIT Center for Detectors. Her research interests are experimental cosmology and near-infrared instrumentation. She is working with Dr. Michael Zemcov on the Cosmic Infrared Background ExpeRiment 2 (CIBER-2). Before coming to RIT, she received her Bachelor of Science degree in Astronomy from the University of Arizona working with Dr. Daniel Marrone on the Event Horizon Telescope/South Pole Telescope instruments.

Read more about her research and outreach activities. 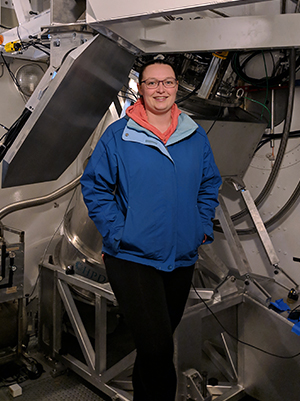 Victoria is a 4th year Ph.D. candidate in the Astrophysical Sciences and Technology program at RIT. Her work with Dr. Zemcov has been on two different projects focused on cosmology in the sub-mm (radio). The first is the Tomographic Ionized-Carbon Mapping Experiment (TIME), which finished its first engineering run at Kitt Peak, Arizona in March 2019.

The second project is archival analysis of Herschel-SPIRE data for determining cluster gas properties with the rSZ Effect. She hopes to defend her thesis on this research in 2022. She received her Bachelor's in Applied Physics from Rensselaer Polytechnic Institute (2016.

For more information about her research, visit her website. 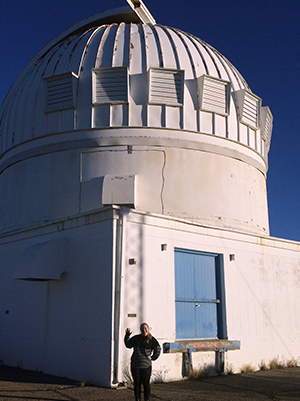 Teresa Symons is a third-year Ph.D. student in the Astrophysical Sciences and Technology program. She is working on the point spread function reconstruction component of the data analysis pipeline for SPHEREx, and also EBL estimation using archival LORRI data from New Horizons. She previously received her MS in Computational Physics and Astronomy from the University of Kansas and her BS in Space Physics from Embry-Riddle Aeronautical University. 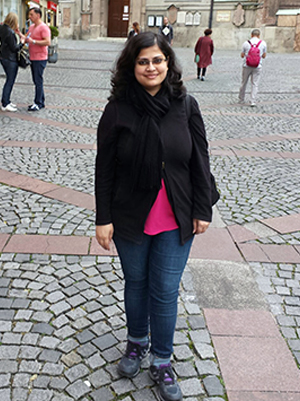 Dr. Bangale is a postdoctoral research associate in the RIT's Center for Detectors department. Her research interests are focused on observational and computational aspects of cosmology and high energy physics along with instrumentation in the near-infrared and very high energy gamma-ray experiments. She is working with Dr. Zemcov on the CIBER-2 experiment. Before coming to RIT, she received her Ph.D. in physics from Ludwig Maximilian University and Max-Planck Institute for Physics, Munich, Germany (2019).