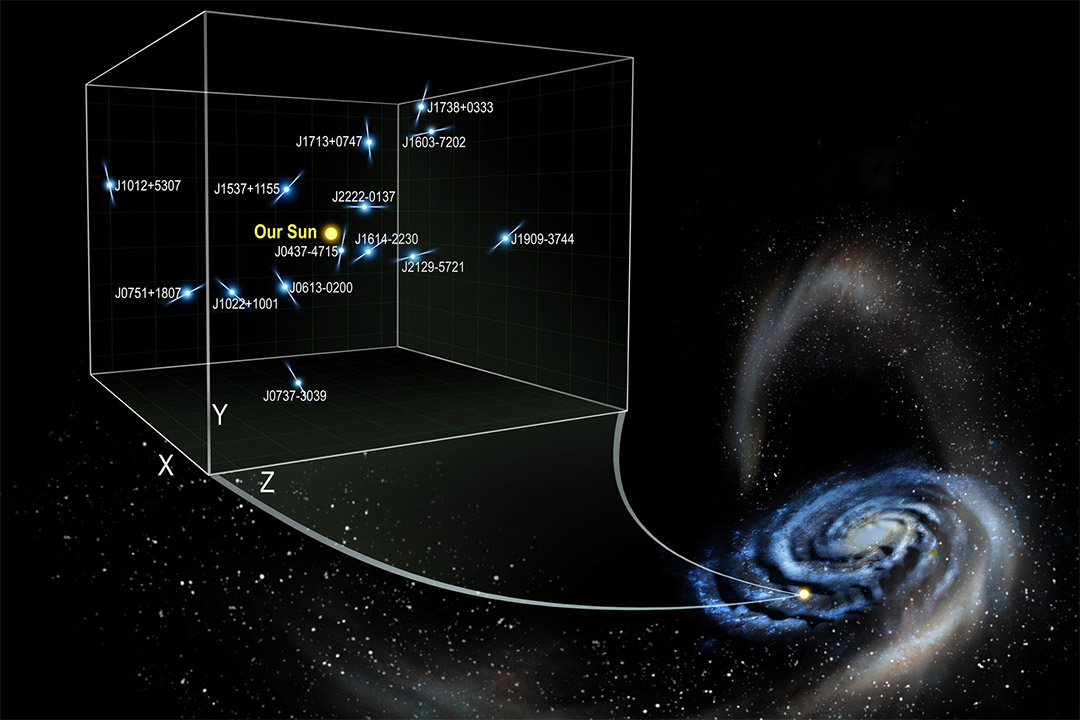 The ripples in the Milky Way disk are shown, along with the tidal debris from the Sagittarius dwarf galaxy. The pulsars analyzed by Chakrabarti and collaborators to calculate Galactic accelerations are shown in the inset.

Researchers have used pulsar measurements to help uncover new information about the density of dark matter in our home galaxy. In a new study led by Rochester Institute of Technology Associate Professor Sukanya Chakrabarti to be published in Astrophysical Journal Letters, researchers have now obtained the first direct measurement of the average acceleration taking place within the Milky Way.

The team—which included Chakrabarti, RIT Assistant Professor Michael Lam, and researchers from University of Rochester and University of Wisconsin-Milwaukee—used pulsar data to clock the radial and vertical accelerations of stars within and outside of the galactic plane. Based on these new high-precision measurements and the known amount of visible matter in the galaxy, researchers were then able to calculate the Milky Way’s dark matter density without making the usual assumption that the galaxy is in a steady-state. These measurements can inform direct detection experiments for dark matter carried out in laboratories across the world.

“The traditional method in astronomy for more than a century has been to use the speeds and positions of stars to estimate accelerations,” said Chakrabarti, the paper’s lead author and faculty in RIT’s School of Physics and Astronomy. “By using the extraordinary time-keeping ability of pulsars, we were able to measure the tiny accelerations of stars in our galaxy for the first time. The accelerations of stars in the galaxy are affected by dark matter and the visible stars, and this work now allows us to begin to understand dark matter in a more realistic way.”

Stars hurtle through the galaxy at hundreds of kilometers per second, yet this study indicates that the change in their velocities is occurring at literally a snail’s pace—a few centimeters per second, which is about the same speed as a crawling baby. To detect this subtle motion the research team relied on the ultraprecise time-keeping ability of pulsars that are widely distributed throughout the galactic plane and halo—a diffuse spherical region that surrounds the galaxy.

This paper will enable a wide variety of future studies. Accurate measurements of accelerations will also soon be possible using the complementary radial velocity method that Chakrabarti developed earlier this year, which measures the change in the velocity of stars with high precision. This work will also enable more detailed simulations of the Milky Way, improve constraints on general relativity, and provide clues in the search for dark matter. Extensions of this method may ultimately allow us to directly measure the cosmic acceleration as well.

Findings were presented at the 237th meeting of the American Astronomical Society on Monday, Jan. 11. For more information, read a pre-print version of the article.