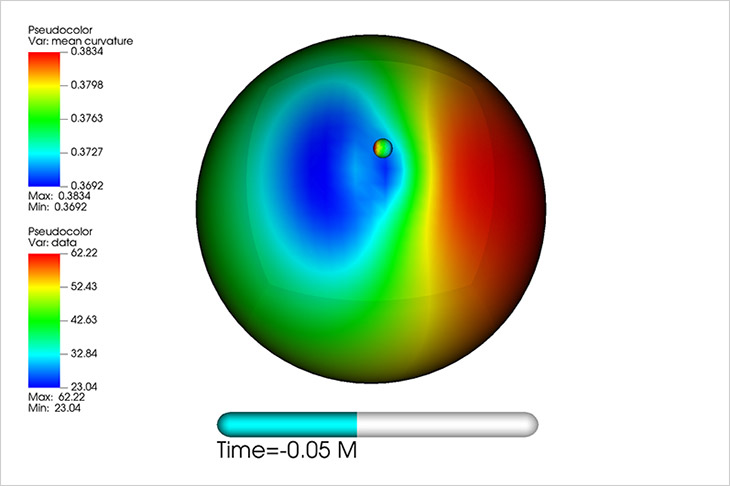 Color map of the curvature on the large black hole horizon generated by the near merging small black hole.

As scientists develop more advanced detectors, such as the Laser Interferometer Space Antenna (LISA), they will need more sophisticated simulations to compare the signals they receive with. The simulations calculate properties about the merged black holes including the final mass, spin, and recoil velocity, as well as peak frequency, amplitude, and luminosity of the gravitational waveforms the mergers produce.

“Right now, we can only observe black holes of comparable masses because they are bright and generate a lot of radiation,” said Lousto. “We know there should be black holes of very different masses that we don’t have access to now through current technology and we will need these third generational detectors to find them. In order for us to confirm that we are observing holes of these different masses, we need these theoretical predictions and that’s what we are providing with these simulations.”

The scientists from RIT’s Center for Computational Relativity and Gravitation created a series of simulations showing what happens when black holes of increasingly disparate masses—up to a record-breaking ratio of 128:1—orbit 13 times and merge.

“From a computational point of view, it really is testing the limits of our method to solve Einstein’s general relativity equations on supercomputers,” said Lousto. “It pushes to the point that no other group in the world has been able to come close to. Technically, it’s very difficult to handle two different objects like two black holes, in this case one is 128 times larger than the other.”

Collaborators on the project included Lousto, Healy, and Nicole Rosato ’18 MS (applied and computational mathematics), a mathematical modeling Ph.D. student. The research was supported through National Science Foundation funding and the simulations were performed using local computing clusters as well as national supercomputers such including the Texas Advanced Computing Center’s Frontera System and Extreme Science and Engineering Discovery Environment. 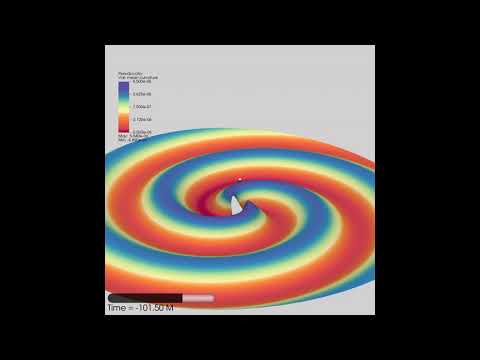