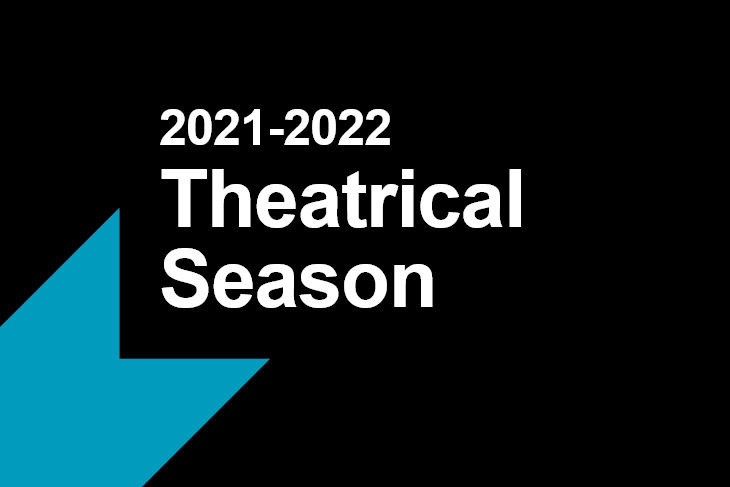 A venue for Deaf playwrights; an interpretation of a Tony Award-winning musical; performance by talented student dancers; and New Yorkers struggling with relationships and identity during the AIDS crisis are all part of a new collaborative season by Rochester Institute of Technology’s National Technical Institute for the Deaf Performing Arts Department and the College of Liberal Arts. 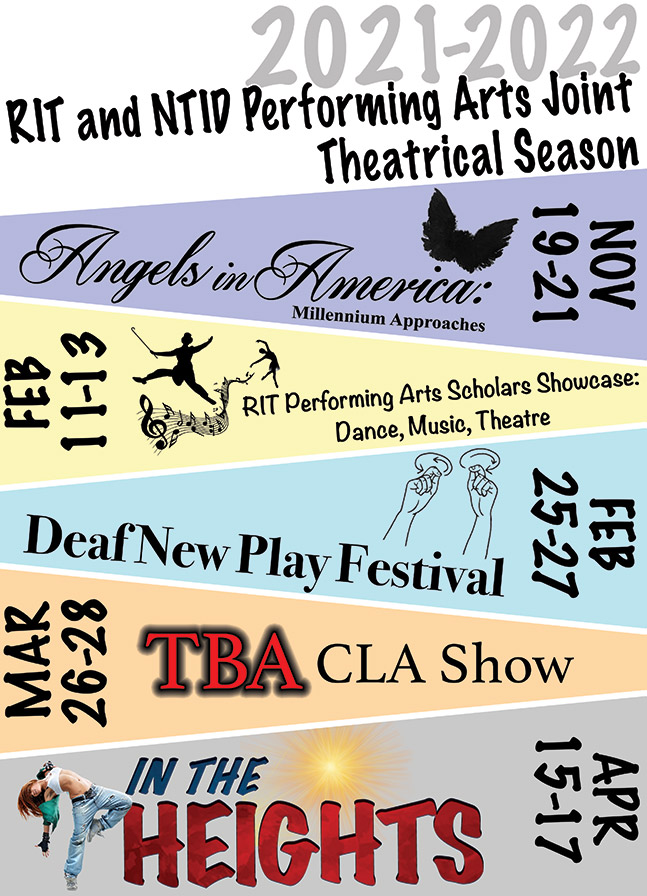 The partnership between NTID and the College of Liberal Arts is a long-term collaboration in which strong backgrounds in performance, acting, directing, dance and music converge to create stunning theatrical productions.

The productions present an array of cultural, political and social issues. The 2021-2022 season includes:

Angels in America: Millennium Approaches, directed by Andy Head, Nov. 19-21 in the Robert F. Panara Theatre. The play is set in New York City in the 1980s as President Reagan sits in the White House while the AIDS crisis rages on. ​Caught in the middle are a Valium-addicted Mormon and her closeted lawyer husband and two men ripped apart by an AIDS diagnosis. These New Yorkers are desperately fighting for survival as they wrestle with love, politics, and God. Throw in a few ghosts, angels, and the infamous McCarthy-sidekick Roy Cohn and you have a fantastical and heart-breaking story. Not appropriate for children under 12. Auditions are 6 to 10 pm, Aug. 27 in Panara Theatre, Lyndon Baines Johnson Hall.

RIT Performing Arts Scholars Showcase: Dance, Music, Theatre, directed by Marc Ellis Holland, Feb. 11-13, 2022, in the Robert F. Panara Theatre. The RIT Performing Arts Scholars Showcase features the newly-formed RIT DanceCore, an ensemble of talented student dancers with choreography by DanceCore Director Marc Ellis Holland and RIT Director of Dance Thomas Warfield. More than exploring different ways to make a shape or learning a series of steps to music, this dance performance presents ways of moving that use the body as an instrument of expression and communication. The performance will also include collaborations with live music, theater students and projection design. ​​

Deaf New Play Festival, directed by Aaron Kelstone, Feb. 25-27, 2022, in Room 1510, Lyndon Baines Johnson Hall. NTID Performing Arts will spotlight four emerging Deaf playwrights chosen from the 18 plays presented in 2021 at the Chicago, Illinois/Columbia College MAP-Deaf Theatre Festival. Each of the four Deaf playwright’s 10-minute plays were produced by Deaf Spotlight, Deaf Austin Theater, New York Deaf Theatre, and Northern Lights Collective (Canada). The top four plays representing each of the four producing groups will be expanded by the NTID Theatre Department. Working with a dedicated team of actors, directors, dramaturgs, and other theater professionals each of the plays will be developed through the remainder of 2021.

In the Heights, directed by Luane Davis-Haggerty, April 15-17, 2022, in the Robert F. Panara Theatre. This musical tells the universal story of a vibrant community in New York’s Washington Heights neighborhood, a place where the coffee from the corner bodega is light and sweet, the windows are always open and the breeze carries the rhythm of three generations of music. It’s a community on the brink of change, full of hopes, dreams and pressures, where the biggest struggles can be deciding which traditions you take with you, and which ones you leave behind.

All four productions are planned to be fully accessible for deaf, hard-of-hearing, and hearing audiences, whether using captions, American Sign Language in the performance, interpreters or a combination.

Tickets for performances in Panara Theatre—$5 for students, senior citizens, and children under age 12; $10 for RIT faculty/staff/alumni; and $12 for the public—will be available through rittickets.com, by phone at 585-475-4121 or at the door two hours prior to curtain time. Performances in the 1510 Lab Theatre are free. Tickets will be released on Eventbrite.