Rochester Institute of Technology unequivocally believes that Black Lives Matter! We are deeply saddened, troubled, and anguished by systemic and routine patterns of racism, police brutality, and anti-Black resistance. Our journey remains forever onward. Sandra Bland, George Floyd, Laquan MacDonald, Breonna Taylor, Tony McDade, Pamela Turner, Eric Garner, along with the countless other Black bodies that have perished at the hands of police brutality, we say their names.

As the United States continues to grapple with acknowledging, understanding and effectively eliminating systemic racism, racial disparities and its impact on Black communities, we remain steadfast in our efforts to cultivate and lead critical inquiry into structural racism. We place tremendous pride in serving not only as a thought leader in this area, but also as a catalyst for inclusive excellence across the university.

As a Division founded on the mission and commitment to ensure a welcoming, inclusive, vibrant and accessible environment for everyone, we know that our work is forever ongoing. We know that our Black and African American RIT family members are in pain, are suffering, and need our assistance and support. We are here for you and offer our hand as a resource, as an outlet, and as an ally. We are committed to staying the course with you in a manner that is both intentional and unwavering.

Together, we invite you to join us on our journey toward a more just, equitable, and inclusive community within and outside of RIT.

An RIT Conversation on Racism 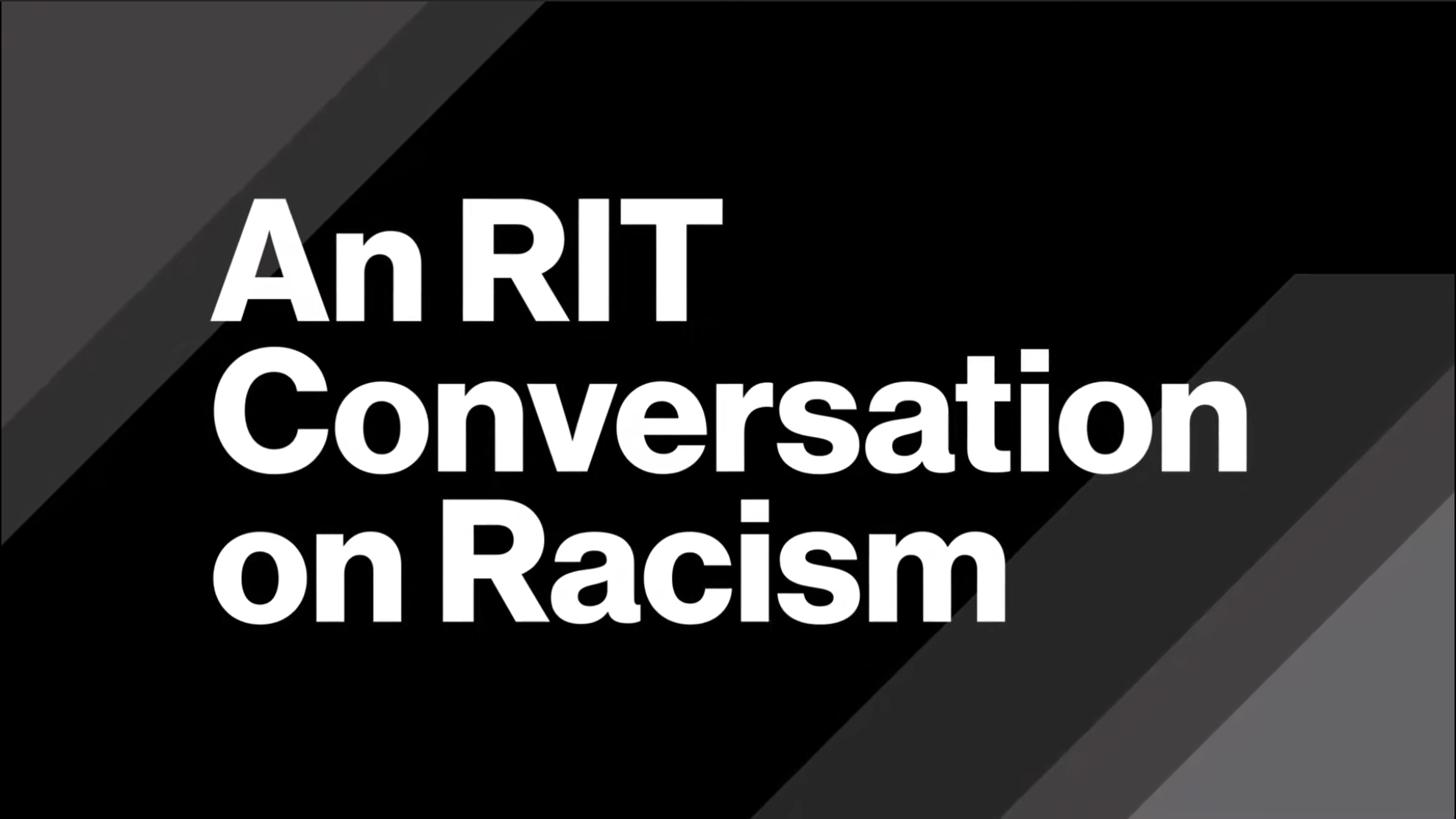 An RIT Conversation on Racism

. . . regarding the murder of George Floyd, a personal reflection

by Keith B. Jenkins

I have spent considerable time with my wife and children since March 2020 trying to come to grips with the sudden-changes we were forced to make in response to the COVID-19 Coronavirus pandemic, particularly dealing with the loss of so many black and brown loved community members across the country.  But recent weeks, and more specifically this past week, events turned our worlds upside down as we again faced not only death after death after death of innocent black men and women, but the horrible, unthinkable murder of George Floyd, the latest victim of police brutality.   Media news, already quite challenging to watch due to COVID-19, became unbearable.

Another black man and a black woman had been murdered and was no longer physically here.

Growing up in the south, in Arkansas, I learned of a tree.  It was referred to when giving directions to someone, as “the hanging tree” in the curve.  “The hanging tree.”  I would learn later that the reference was to a tree where individuals were lynched.  It wasn’t right in the 19th and 20th centuries when law enforcement was included (or not).  It still is not right in the 21st century nor at any other point in time.  Black Lives Matter.

My father passed away while I was Assistant Provost for Diversity at RIT in the 1990s.  I remember well the impact he had on my life as I grew up in Arkansas, matriculated to college at the University of Arkansas and completed both  MA and Ph.D. degrees at Florida State University.

I look at my wife, son, and daughter, thankful for another day with them.   It remains difficult to capture the emotional impact the COVID-19 pandemic is having on our family as my children adjust to daily life apart from friends and family beyond our immediate family.  And now, both my wife and I feel drained as we explain, again, why the lessons we teach them daily, weekly, monthly, and yearly still matter so much.  Racism has not been eradicated.  Police brutality and the most recent manifestations of lynching still exist.  And every day we still awaken committed to trying to make a difference—via our spheres of influence through family, friends, workplace, church, neighborhood, city and country—that will make this world better for “all” of its inhabitants.

But George Floyd is no longer here.  Nor Breonna Taylor, Michael Lorenzo Dean, Eric Reason, Christopher McCorvey, Christopher Whitfield, Atatiana Jefferson, Dominique Clayton, Pamela Turner and countless others, including Eric Garner, John Crawford, III and Michael Brown.  Partners, children, family, friends, their communities and the world have all been robbed of their contributions and impact.

Yet, we are here.

Know that for those of us who remain, we see you and share in the deep loss that we are all feeling this season.

In 1967 in a speech at Stanford University, Reverend Dr. Martin Luther King, Jr. shared, “Certain conditions continue to exist in our society, which must be condemned as vigorously as we condemn riots. But in the final analysis, a riot is the language of the unheard. And what is it that America has failed to hear? It has failed to hear that the plight of the Negro poor has worsened over the last few years. It has failed to hear that the promises of freedom and justice have not been met. And it has failed to hear that large segments of white society are more concerned about tranquility and the status quo than about justice, equality and humanity. And so in a real sense our nation’s summers of riots are caused by our nation’s winters of delay. And as long as America postpones justice, we stand in the position of having these recurrences of violence and riots over and over again.”

The fascinating reality is that although this speech was given 53 years ago, it still speaks to a nation that has failed to hear the plight of black and brown people that has worsened over the last few years.  It has failed to hear that the promises of freedom and justice “still” have not been met.  So, “winters of delay” still exist.  And today, our, black and brown people’s pain still exist.  But even in the midst of this pain, most protests have remained peaceful.

Even as Vice President and Associate Provost for Diversity & Inclusion, I still commit to teaching two courses that I hope will impact the lives of students at RIT—Intercultural Communication and Rhetoric of Race Relations.  The latter course examines the history of the struggle for freedom and equality for blacks in American society, tracing the history and rhetoric of key spokespersons from the pre-civil war period to the twentieth century.  To better understand the rhetoric of the sixties-civil rights movement, students watch and we discuss aspects of Eyes on the Prize, a 14-part documentary about the Civil Rights movement and Malcolm X:  Make it Plain, a documentary about the life of Malcolm X, or El-Hajj Malik El-Shabazz.  These videos help students better understand the issues fought for and accompanying protests.  But there is always a moment when we pause as a class and recognize, “The rhetoric of Ida B. Wells Barnett regarding lynching, or Nannie Helen Burroughs, King, Malcolm X, Louis Lomax, Stokely Carmichael and others easily speak to issues blacks ‘still’ face in American society today.”  And so, the protests still speak to a nation that needs to “hear and respond.”  “Black Lives Matter!”

So, the question for us now is “How do we move forward?”

I have but one answer that has always been the answer in fighting for justice, equality and humanity.  Stay the course.

RIT’s commitment to diversity & inclusion is longstanding and continues to evolve and improve as we listen to and address the needs of various RIT populations.  Closing the graduation gap of AALANA and non-AALANA students remains a priority and we find success through several DDI-affiliated initiatives that impact students through the Multicultural Center for Academic Success, Higher Education Opportunity Program, the Destler/Johnson Rochester City Scholars, the Louis Stokes Alliances for Minority Participation, McNair Scholars and other programs.  We continue to address climate issues across the university through Gray Matter talks, Diversity Education, Diversity Theater, Heritage Month celebrations, Expressions of King’s Legacy and other initiatives.  And we continue our endeavor to diversify the faculty and administration and hire, promote, and retain an increasingly diverse and outstanding staff, supported through the Office of Faculty Diversity & Recruitment and the Executive Diversity Advisory Council, focusing on staff.  So, we stay the course.  A difference is being made.

But we also take this time to “hear” what is still missing as we continue to evolve and improve.

Existing avenues are still in operation during this time—Gray Matter, Diversity Education, Diversity Theater—as well as other initiatives that will allow us to examine our present and enhance the work already being done, whether at RIT or within the Greater Rochester community.

We hear the pain.  We see those who continue to hurt.  We remain committed to staying the course.  There is yet much still to be done.

RIT Encourages Discussion on Justice and Black Lives Matter with a Vigil and Town Hall Meeting.

The Senseless Death of George Floyd: A Statement from President David Munson and Dr. Keith Jenkins