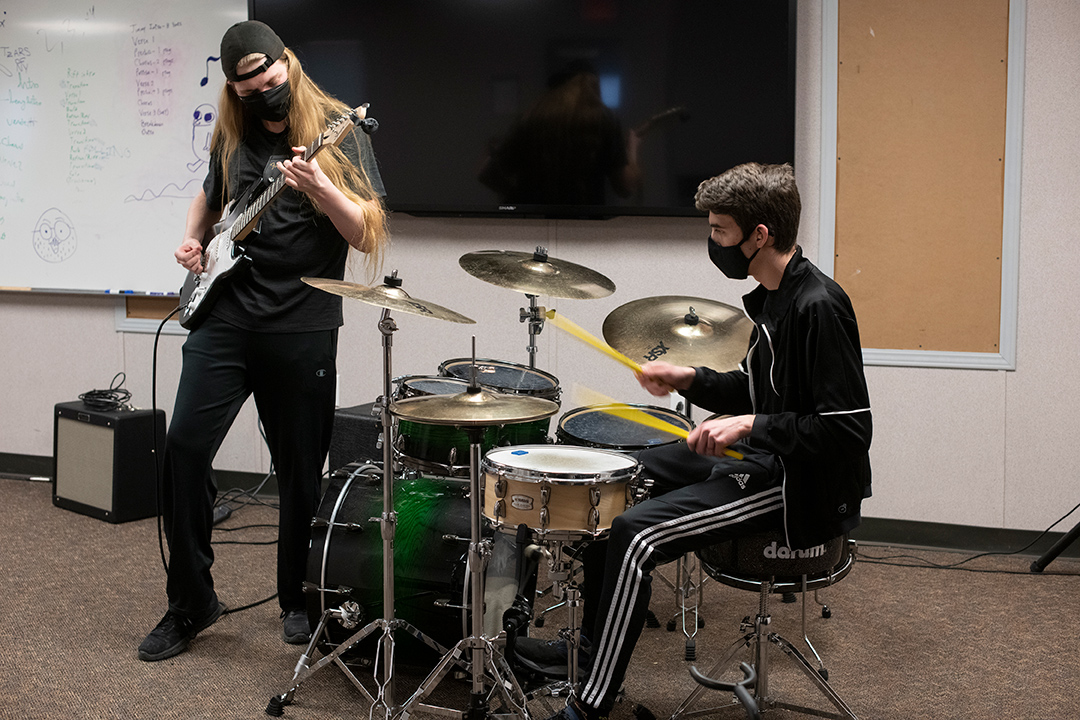 Jared MacKenzie, left, and Anthony Roberts founded their rock band, Tzars of NY, last semester. They are taking courses to learn about the business of the music industry and practice each week in the Tiger Records studio.

For years, Rochester Institute of Technology students have been able to take music lessons. But now, they can also learn more about the music industry by taking a class about artist management, recording, production, and marketing.

Tiger Records, which is based in Annex 7, a temporary building between Brown and Ross halls, is where students may take their class, rehearse, and eventually record their music. Tiger Records began in the fall of 2019 when two graduating seniors interested in the business side of entertainment hoped to go into production and marketing.

Four students this semester are taking the class, and they could take the class each semester if they want. The course, part of RIT’s School of Individualized Study, may include topics such as artist management, recording and production, marketing, and the business side of being a professional musician.

“Some of the students do perform music, some just love listening to it or just want to be part of the music scene, maybe in design, and some are looking for the business and organizational skills to see how they can do this on a more professional level,” said Karl Stabnau, visiting lecturer for music business and performing arts initiatives in the Department of Performing Arts in the College of Liberal Arts.

Tiger Records is the latest initiative at RIT to expand opportunities for students interested in pursuing performing arts. Nearly 500 students have received partial performing art scholarships in the past two years.

“Colleges typically have a jazz band, a wind ensemble, and a symphony,” Stabnau said. He said RIT President David Munson pushed to provide more options to attract more students who can pursue their love of performing while earning a non-music degree at RIT.

“Everybody wants to be a rock star at some point. The arts are something everyone wants to participate in,” Stabnau said. “But we’re no longer living in a world where you do one thing, like being an architect, photographer, or guitar player. Now you have a plurality where you can do them all. So if we can’t provide that experience, students will go somewhere else. Here at RIT, students will see that being a singer or songwriter and at the same time being an engineer can be a viable career path. They can come to RIT to get the best of both. There are not a lot of universities that provide that support structure for students.”

The record label will also provide support for student-run bands to help them with their image, social media, and production.

He said more than 50 students are using the nearly 1,000-square-foot space in Annex 7, which is being outfitted with furniture, signage, logos, a recording studio, and speaker system. The space can be used for rehearsals—there are 10 student bands currently rehearsing there, usually in the evenings and on weekends. “The need for rehearsal space is huge,” Stabnau said.

Also in the works is a website that will feature recordings from the students. “It will be a place where you can meet all of the bands on campus,” he said.

Although there are students involved in Tiger Records who play jazz fusion, heavy metal, and groups featuring a jam band and acoustic duo singers, Stabnau expects the bulk of the interest from students will be commercial and contemporary music, including rock and roll.

That’s what first-year students Jared MacKenzie and Anthony Roberts are interested in. They met in the RIT Steelband Ensemble last semester and got together to form a band, Tzars of NY. And they are taking the Tiger Records class each week, taught by Stabnau.

“Our class focuses on management and behind-the-scenes work with music production,” said MacKenzie, a mechanical engineering major from Geneseo, N.Y. “We go in and have a roundtable discussion, figure out how we’re going to develop this record label and our goals for the future. At some point, we’ll get into learning about music production and sound mixing and maybe we will manage other bands on campus as a label.”

MacKenzie, who started playing drums in the fifth grade, took up guitar a year ago. He enjoys classic rock and heavy metal music and received a performing arts scholarship to RIT.

“For me, music is my biggest form of expression and creativity when I can write and express how I’m feeling and put my thoughts into it,” he said. “If I had a really good day, I’d want to capture that, connect to it emotionally. It can help me get through some stressful times. I’m enjoying the class. It’s a nice diversion to normal classwork. Music is what’s stopping me from going nuts right now.”

Roberts, a first-year computer science major from Chittenango, N.Y., started playing the drums in the fourth grade. He played trumpet in middle school and started writing music in his junior year of high school. He formed a band, The Kiwis, with his older brother and gave some FaceTime performances for family members.

“I kind of grew up with music,” he said. “And rock music has always been the music I’ve been most interested in.”

“I’m really interested in knowing about what goes into a record label, the engineering and live shows,” he said. “It would be nice to be able to do something like that for a living, but it’s not too realistic. So I just want to have fun with it and see where it goes.”

Stabnau hopes more students will get involved with Tiger Records and they will have more space to expand when the proposed Performing Arts Complex is built—the first phase scheduled for completion in spring 2023.

“I’d love to see 100 students taking Tiger Records courses,” Stabnau said. “Our goal with the label is to be a place where everybody who wants to be in music can participate and turn this into the hub of commercial music on campus. I can foresee students breaking off into creative design, recording and producing, artist management, live show promotion, financing and business. However they envision being part of the music industry, this will help them achieve it.” 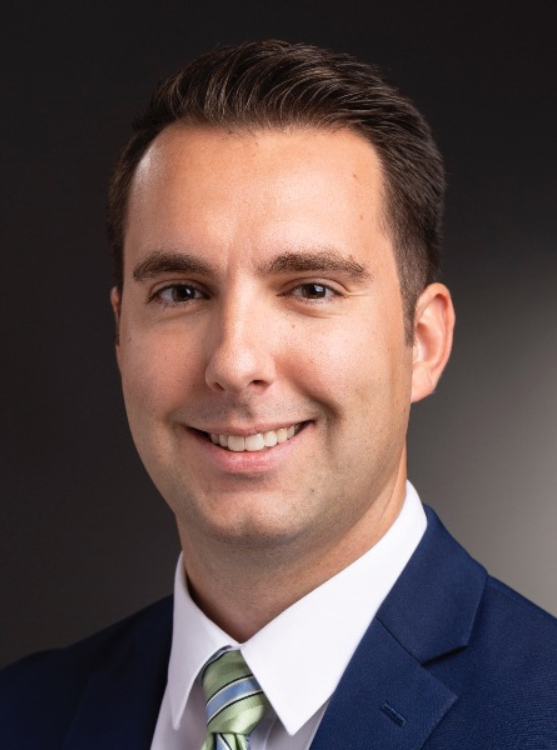 A native of Brighton, N.Y., he studied jazz saxophone at the University of Rochester’s Eastman School of Music. He has toured as a performer both nationally and internationally and can be heard on recordings that span genres from jazz to pop. He started a music production and promotion company in Rochester and earned a master’s degree from Syracuse University in entertainment management. He is also production director for the Rochester International Jazz Festival.