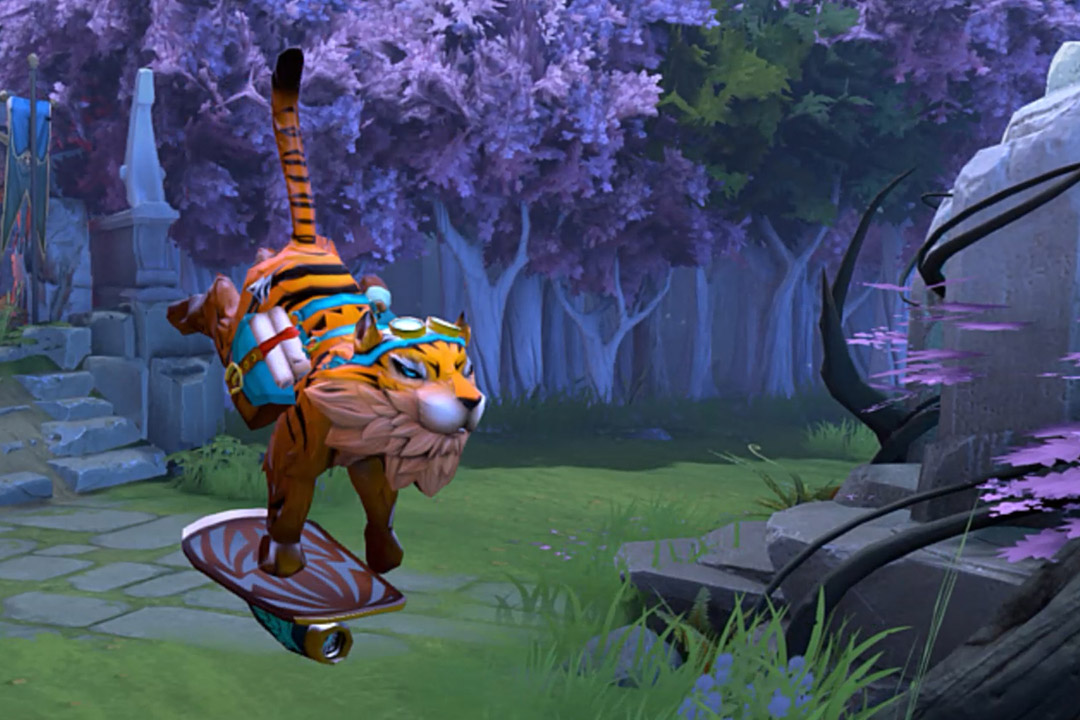 Vote now for a chance for the student-developed RIT tiger courier to be accepted into the popular Steam platform game Dota 2.

Rochester Institute of Technology is vying to be the first university to develop and have a game character accepted into the wildly popular online game Dota 2. The character, or courier, in the form of a tiger, was developed in MAGIC Spell Studios by a team of former RIT students and a faculty adviser and can now be voted on for consideration into the game by anyone with an active Steam platform account.

Dota 2, published by Valve in 2013 and played by millions of people daily, is a multiplayer online battle arena (MOBA) video game and is reportedly one of the most strategically robust MOBAs ever made. RIT’s esports team also has a tremendous track record of success playing Dota 2 in competition and has been crowned the game’s Collegiate Star League champion. The RIT courier was developed in collaboration with the RIT Dota 2 esport team.

Three former students — Maliheh Rahrovan ’19 MFA (film and animation), Sophia Zapata ’20 (new media design), and Jessica Ellison ’22 (film and animation) — and faculty members from multiple departments and colleges, including interactive games and media, film and animation, and new media design, were hired by the MAGIC Spell Studios to work on concept art, modeling, sculpting, texturing, and animation. Members of RIT’s esports team helped select the winning design, and the result is a fierce hoverboard-riding tiger on a mission to deliver essential equipment to those on the battlefield.

According to Jesse O’Brien, assistant professor in the School of Film and Animation and director of the multi-year project, developing a Dota 2 courier takes a lot of professional expertise, and having one accepted into the game is a major industry accomplishment. He said that if the courier is accepted into the game, there is the potential for millions of prospective students to witness—firsthand—the excellence of the university’s game design and art programs.

“Developing a game courier is a project that truly captures the essence of everything that we teach in the classroom and work to promote in the community through MAGIC Spell Studios,” he said. “This tiger courier is also a cool way to honor our esports team and to keep RIT front and center in the game development and esports areas.”

Although the game is free to download, players purchase the couriers. A portion of those proceeds will go to RIT’s Dota 2 esport team.

To see the courier in action, go to the RIT tiger courier YouTube page.

Vote for RIT’s tiger courier on the Steam platform.