RIT is where creative potential is unleashed and ideas become reality.

Whether it’s through university initiatives that inspire inventive ways for people to connect, offering places and spaces where imaginative ideas soar and makers redesign the future, or providing access to partnerships that fuse ingenuity with artistry and enterprise. 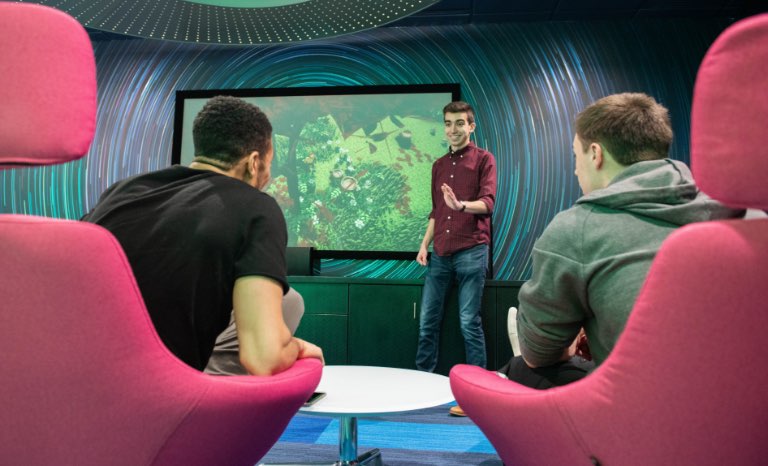 on the list of “most innovative schools” according to U.S. News & World Report.

Key Initiatives in Creativity and Innovation 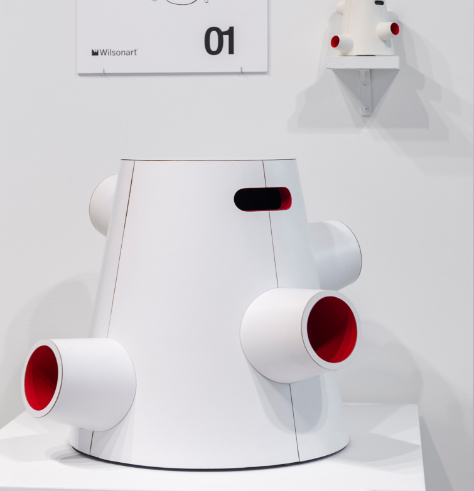 An annual collaboration between RIT’s industrial design students and industry partners, Metaproject is a challenge for students to engage and utilize design thinking in a project prompted by an industry partner’s mission, products, or services. Working with companies like Umbra, Areaware, Kikkerland, and Poppin, these annual sponsors drive the project and then jury and honor outstanding student-developed designs. 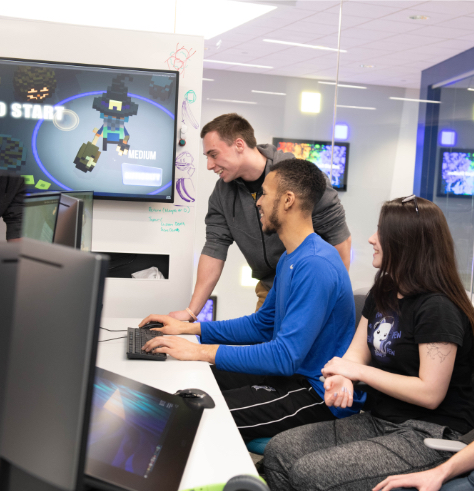 A digital playground for students to develop and publish digital media—games, apps, films, art installations, and interactives—and grow ideas into products and companies. And, they get to work alongside professionals from film, animation, television, 3D entertainment, gaming, and more. A fully outfitted sound stage and post-production studios further enhance learning and allow faculty to introduce real-world film, animation, and digital media workflows to the classroom. Students learn on the same hardware and software platforms used in industry while honing their technical and creative skills. It’s a fully immersive experience for RIT students. Learn more about MAGIC Spell Studios 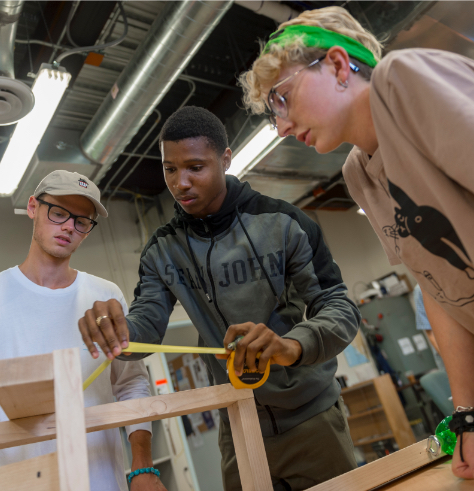 Access technology refers to products or systems that are created to support the functional capabilities of people with differing abilities. At RIT, a unique innovation ecosystem that consists of unique educational programs and world-class facilities—such as the Simone Center for Innovation and Entrepreneurship, The Construct, and Studio 930–create a collaborative environment for faculty and students to create, prototype, and incubate new ideas for products and services that enhance accessibility for individuals across a wide range of challenges. 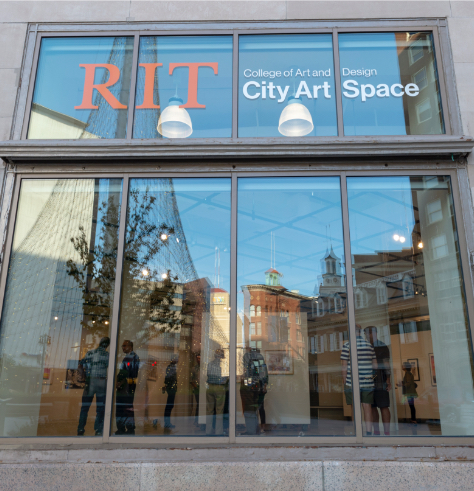 The “R” in Rochester Institute of Technology stands for something special. That’s why the university thrives on partnering with the greater Rochester region. RIT has reinvested in downtown Rochester with the Center for Urban Entrepreneurship and City Art Space, and has formed relationships with Seneca Park Zoo, Rochester Museum and Science Center, The Strong National Museum of Play, and Genesee Country Village and Museum, to name a few. There is also an impressive cluster of 19 public and private colleges throughout the greater Rochester region. Collectively, our institutions enroll 83,000 students and award 19,000 degrees each year. We are one of the most academically productive regions in the country, ranking third in college degrees per capita and No. 1 for degrees in STEM fields, according to the U.S. Department of Education. Indeed, Rochester is a college town. 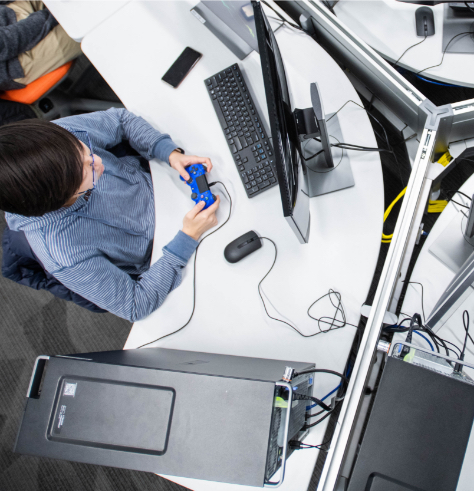 With three national championships, RIT eSports is on the rise at the national collegiate level. RIT’s team is part of the Electronic Gaming Federation, an organization similar in structure and oversight to the NCAA, but focused on esports competition. About 1,200 students are also involved in the production and technical teams that help stream and run matches, or provide commentary for games as casters—esports’ name for live, in-game play-by-play commentary. Currently RIT has esports teams playing Counter-Strike: GO, Dota 2, Hearthstone, Heroes of the Storm, League of Legends, Overwatch, PUBG, Rocket League, Rainbow Six: Siege, Super Smash Bros. Melee/Ultimate, Smite, StarCraft II, Call of Duty, Fortnite, and Pokémon. 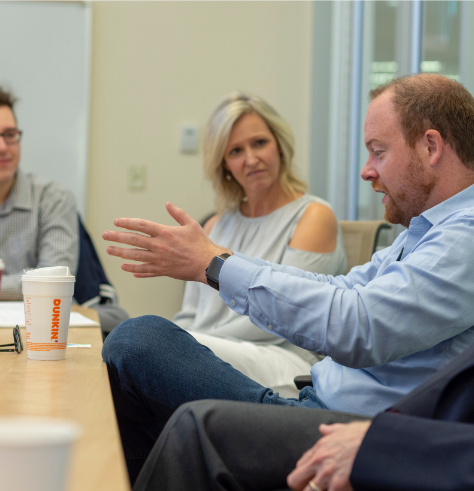 Need time and funding for innovation development? The Gap Year Entrepreneurial Fellowship is a competitive fellowship that provides selected students the opportunity to pursue a high-value business, new product, or compelling social innovation opportunity. But more importantly, it allows students with an ongoing enterprise to take a year to focus their full attention on the venture. As students develop their companies, they receive $15,000 in support and mentoring from experts at the university, all while continuing to make progress on their RIT degree. The fellowship was created to encourage the entrepreneurial instinct and celebrate the initiative of the many RIT students who start their own businesses. 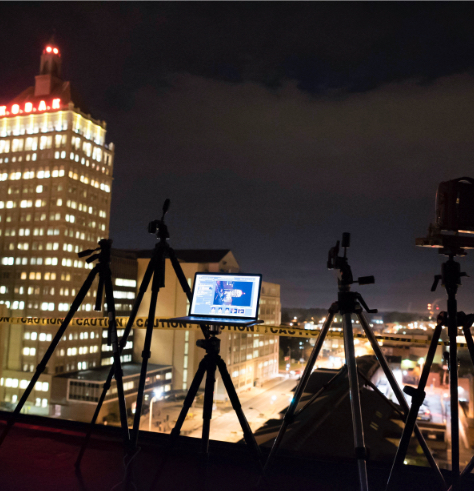 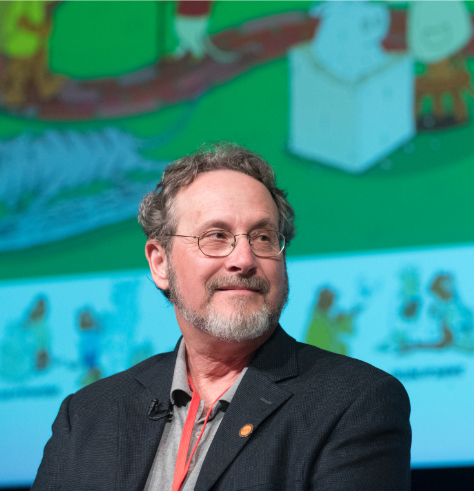 Leigh Rubin is RIT’s first cartoonist-in-residence. Rubin is a syndicated cartoonist and the creator of Rubes, which is published in more than 400 media outlets around the world. As part of his year-long residency, Rubin will speak with students in art history, video game production, and design classes, where he’ll share his insights on the business aspects of his work to help them better understand what it’s like to be a successful cartoonist, including marketing and branding his creations, and working with publishers and syndications. He will also meet with faculty across RIT to discuss best practices for teaching students how to be more creative and innovative.

Places and Spaces for Creativity and Innovation to Thrive 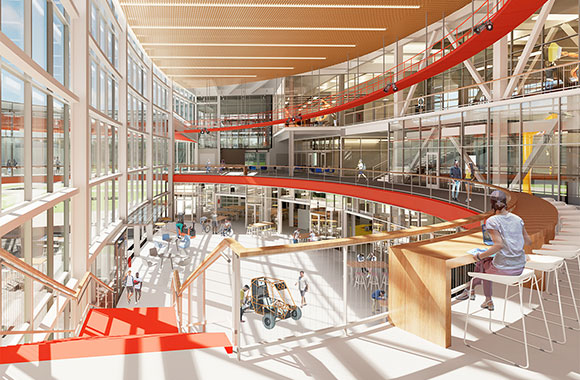 Student Hall for Exploration and Development (the SHED)

Launching in fall of 2023, the Student Hall for Exploration and Development (the SHED) will connect the Student Alumni Union with the Wallace Library to become the center for makers or doers on the RIT campus. The complex will include a black box theater, stages for performance groups, 24/7 open areas for project work, music practice rooms, a recording studio, new dining experiences, state-of-the-art classrooms, and central faculty meeting spaces. 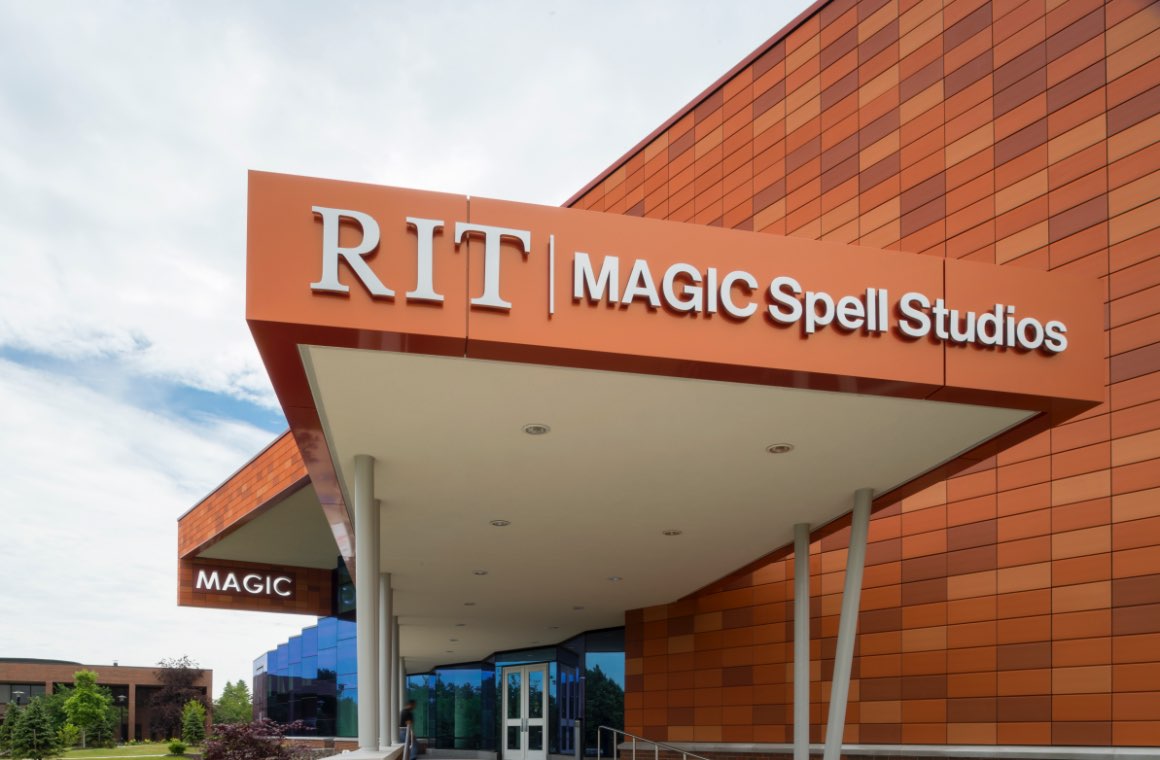 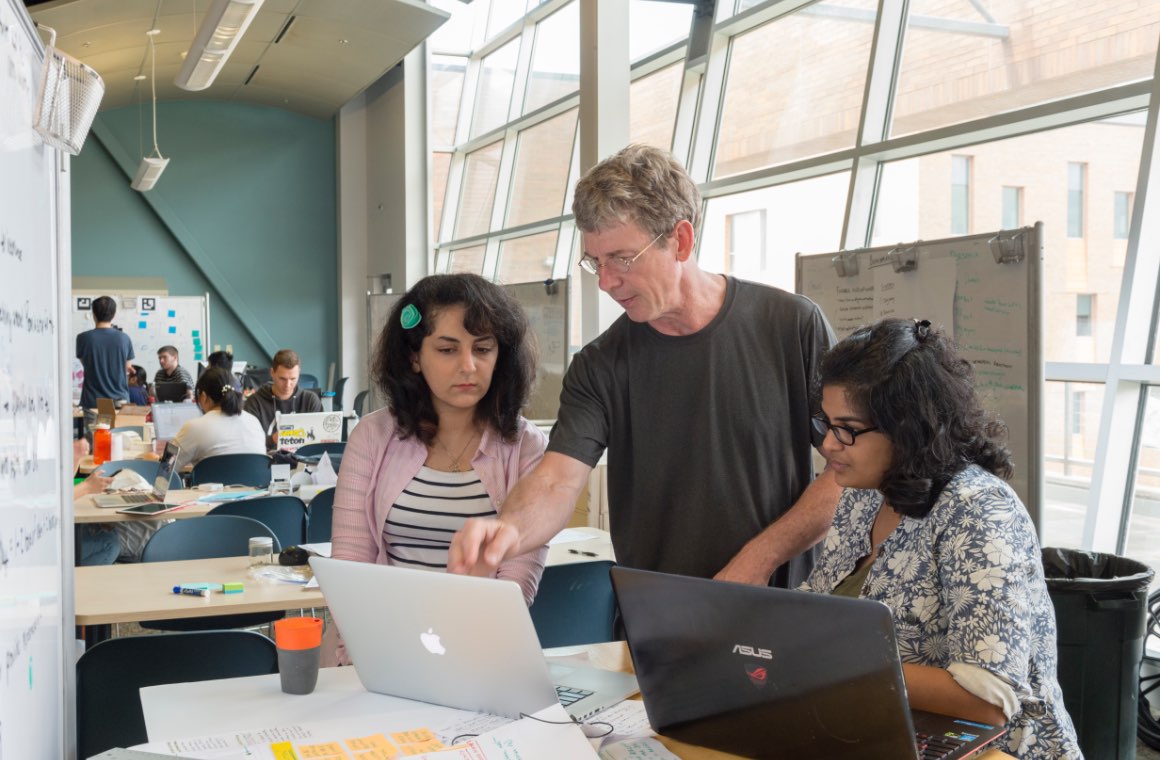 A collaboration between the Simone Center for Innovation and Entrepreneurship, the Kate Gleason College of Engineering, Saunders College of Business, and the industrial design program of the College of Art and Design, Studio 930 is where many access and health technologies products have incubated and become reality. 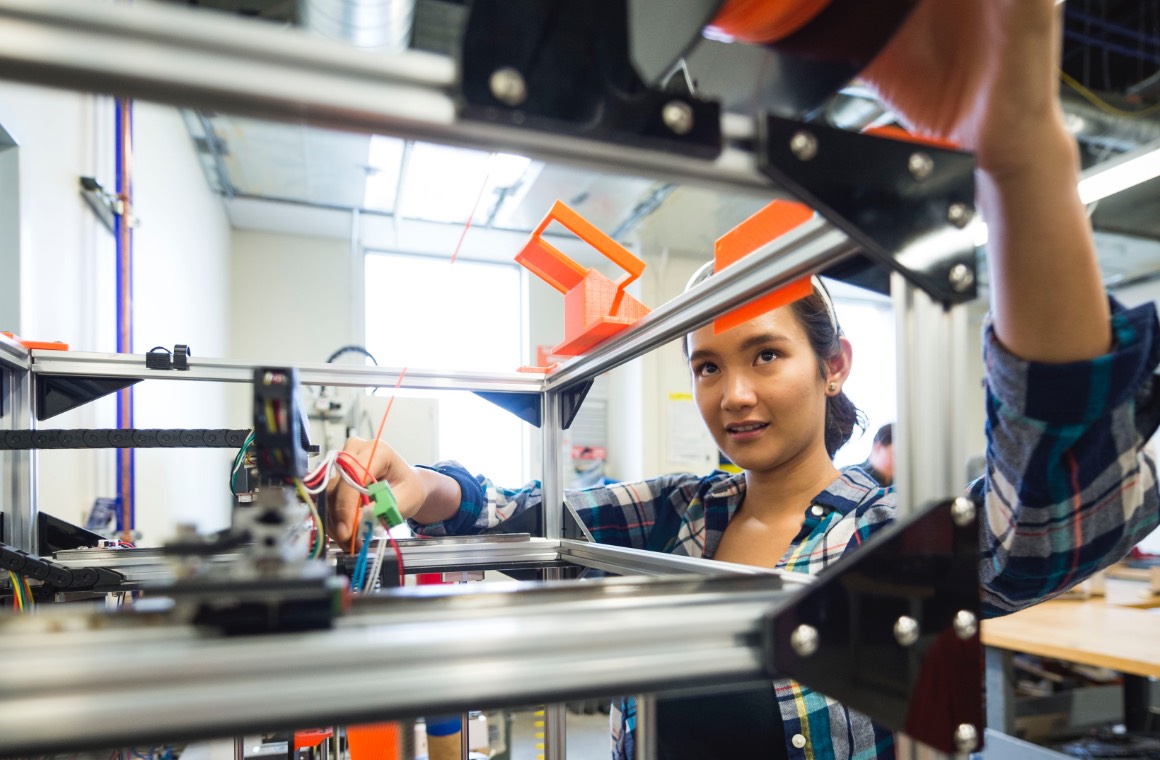 A makerspace where hobbyists and tinkerers can combine science, engineering, design, and tech know-how with infectious enthusiasm to create something new, bold, and inventive. Students have access to a variety of high-tech and low-tech equipment, including a CNC router and mill, laser cutters, 3D printers, drills, saws, soldering irons, electronic circuitry, and woodworking and metalworking supplies. All majors and skill levels are welcome, and the communal space can be used for self-directed projects, entrepreneurial ventures, and even tasks as seemingly mundane as fixing high-tech gadgets when they break. 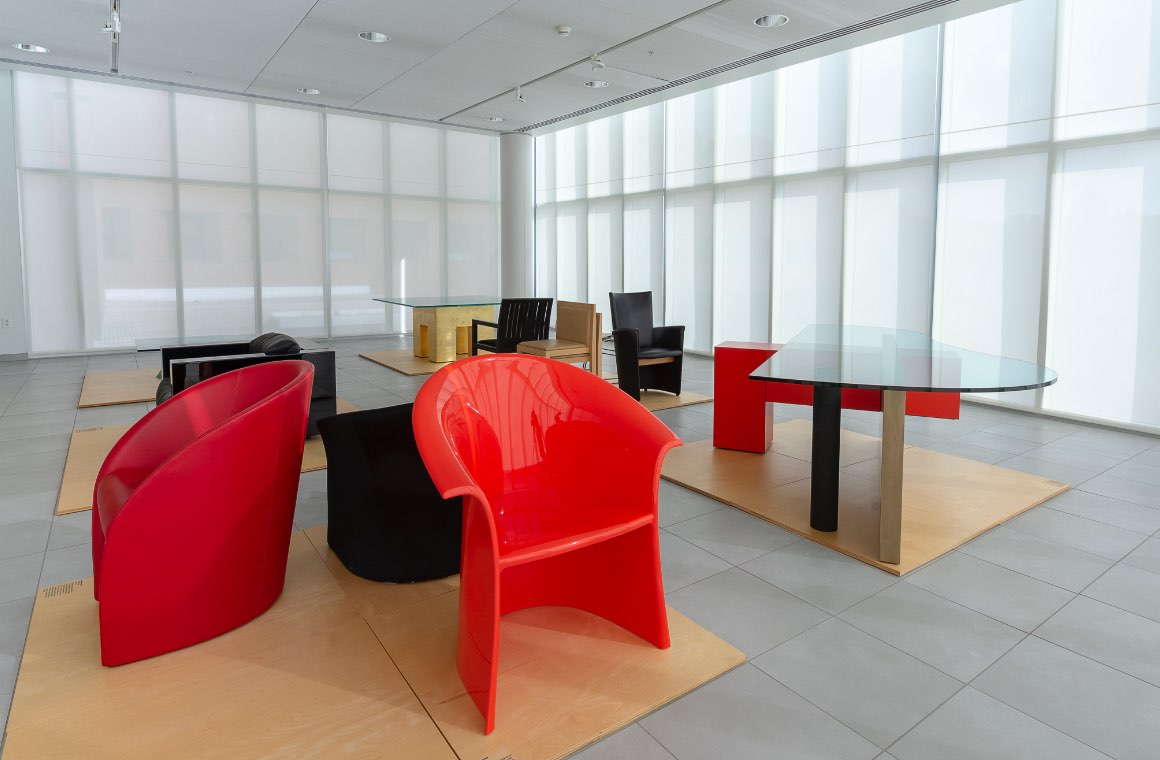 An international hub for education, research, collaboration, and advocacy, the Vignelli Center for Design Studies is a world-class facility housing the archive of renowned designers Massimo and Lella Vignelli, whose graphic and product work are icons of international design. The center serves as a global design museum and premier educational resource, adding significant depth to RIT’s community of creators and innovators. It’s also a distinctive and accessible archival resource that creates a dynamic learning environment for RIT’s art and design students and a vibrant epicenter for international researchers. 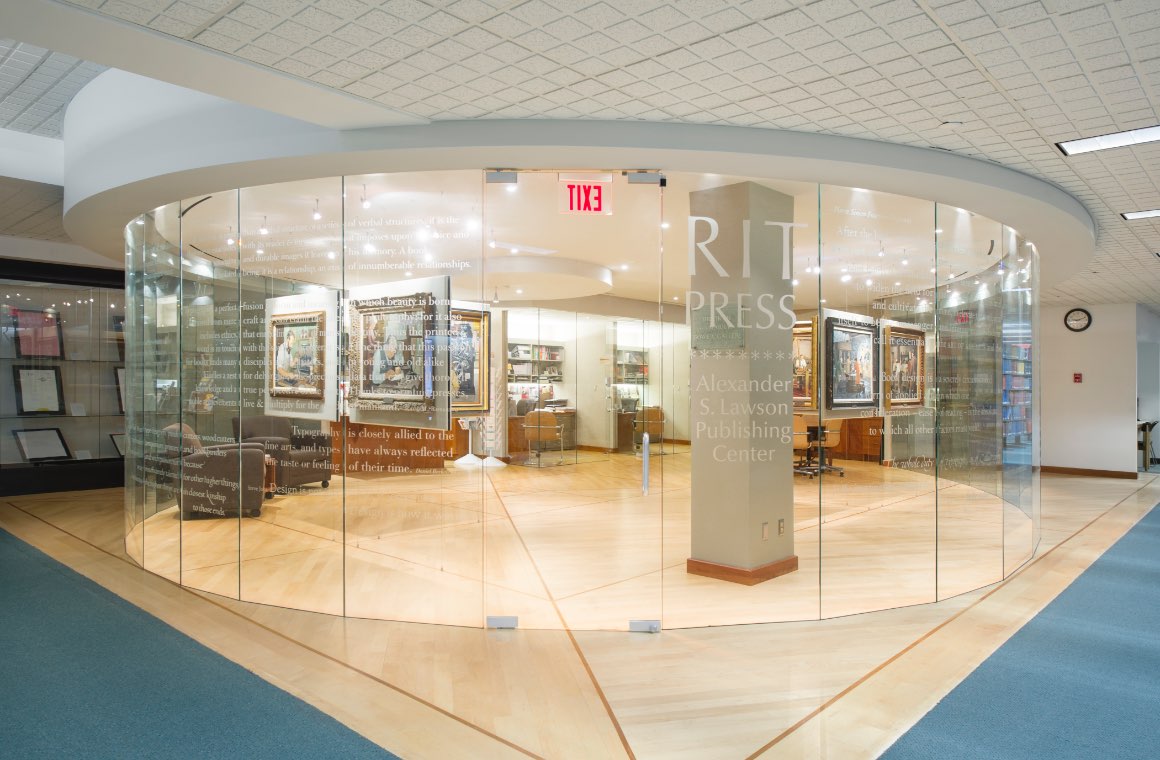 The Cary Graphic Arts Collection is one of the country’s premier libraries on graphic communication history and practices. It has grown into a comprehensive compilation of primary and secondary resources on the development of the alphabet and writing systems, early book formats and manuscripts, calligraphy, the development of typefaces and their manufacturing technologies, the history and practice of papermaking, typography and book design, printing and illustration processes, bookbinding, posters, and artists’ books. 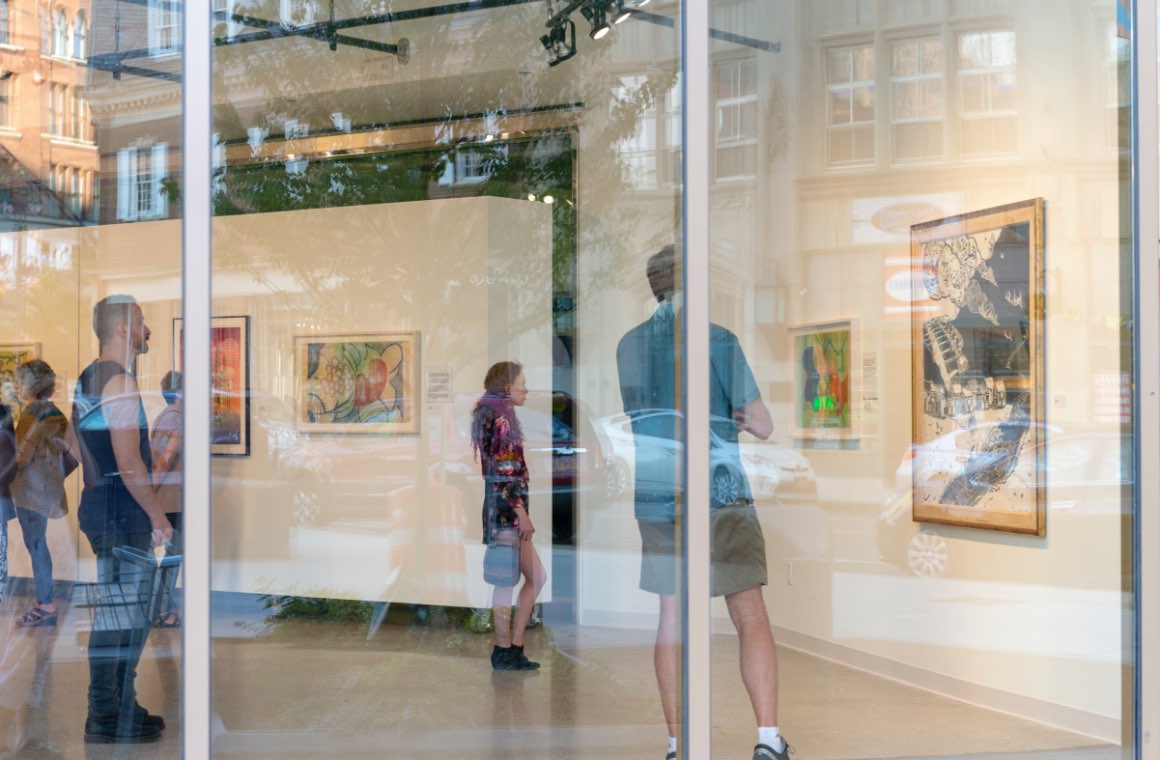 A variety of gallery spaces, both on and off campus, feature the creative work of students, faculty, alumni, visiting artists, and more. Bevier Gallery is the main on-campus exhibition venue. RIT City Art Space, located in the heart of downtown Rochester, is RIT’s premier exhibition and event venue. University Gallery is a multipurpose space that serves as a prominent exhibition space and event venue for RIT and the greater Rochester communities. The William Harris Gallery is RIT’s primary venue for the interpretive display of photography, photo-based art, and moving media.

Mike Battle ’02 (film and animation) has been watching The Simpsons for almost 30 years. For about half of that time, he has had a behind-the-scenes view of new episodes.

Matt Taylor ’02 (film and animation-production option) was the co-supervising sound editor of a Warner Bros. sound team that won an Emmy Award for its efforts on Barry.

Adam Kubert, ’79, ’81 (medical illustration) is a comic book artist known for his work for publishers such as Marvel Comics, Dark Horse Comics, and DC Comics, including work on Ultimate X-Men, Ultimate Fantastic Four, The Incredible Hulk, Wolverine, Spider-Man, and Superman. Kubert was rated by Wizard magazine as one of the “Hot 10 Writers and Artists” in the industry in 2008.

Glynis Sweeny ’84 (graphic design) is an illustrator and nationally recognized caricaturist who is known for lampooning political and business figures. She has illustrated for Time, The Wall Street Journal, BusinessWeek, The Village Voice, The New York Times, Comedy Central, The Atlantic, Fortune, Rolling Stone, GQ, Entertainment Weekly, The Los Angeles Times, and The Boston Globe.

Eric Avar ’90 (industrial design) is vice president of design innovation at Nike. He is the creator of some of Nike’s most innovative and award-winning designs, including the Kobe Bryant series of footwear.

Kwaku Alston ’94 (photographic illustration) is a celebrity and political photographer. His photos have included Hollywood stars like Will Smith and Robert Downey Jr., athletes like Shaquille O’Neal, and President Barack Obama and the First Family during the historic 2008 campaign for the U.S. presidency. His work includes editorial and advertising photography for Crate & Barrel, Coca-Cola, Target, Sports Illustrated, and Time.

William Snyder ’81 (photojournalism), professor in RIT’s School of Photographic Arts and Sciences, is a four-time Pulitzer Prize-winning photojournalist and the former director of photography for the Dallas Morning News.

Teresa Drilling ’83 (art and design) is a stop-motion animator recognized for her work on feature films including Coraline, Wallace & Grommit: The Curse of the Were-Rabbit, and Chicken Run. Drilling has won two Primetime Emmy awards for her work.

Brian Cantwell ’99 (film and animation) was part of a three-member team from Industrial Light & Magic who received an Academy Award for developing a system that enables high-fidelity facial performance transfer from actors to digital characters in large-scale productions.