These files are available for download. All come "as is." We have found them useful, and done our best to ensure their accuracy. If you find out otherwise, please let us know.

Instrument Evaluation Database
This is a database of instrument evaluation files. These data accompany a pair of 2007 articles in Color Research and Application. These files are available for download. Most are in Microsoft Excel format.

Standard, easily accessible, test targets have long served the field of color imaging as a foundation for comparison of the performance of various imaging systems and algorithms and the open and meaningful exchange of research results. This website details the creation and application of a new digital color test target useful for research and development of color imaging systems. The target has several advantages over previous types of targets that include spatial resolution, dynamic range, spectral resolution, metameric properties, lack of noise, and continuous tonal variations. All these features can be important for visual assessment, computational analysis, and colorimetric evaluation. This target, known as METACOW, is freely available to all performing research in color imaging.

METACOW is basically a very large (4200 x 6000 pixel) full-spectral image. It is rendered at 5nm increments, between 380 to 760...and is thus about 3gigs in size. It is designed such that both halves of each "cow" appear to match when illuminated with CIE D65, and viewed with the CIE 1931 Standard Observer. This is the example shown above. Each half of the cow is actually maximally metameric with itself. The left half of each cow has the spectral reflectance of the GretagMacbeth Color Checker, while the right half is a Metameric black that has been specially calculated to maximize color difference under Illuminant A. This type of target is designed to test both illumination and spectral responsivities for digital imaging solutions. Examples of illuminant (left) and observer (right) metamerism are shown below. 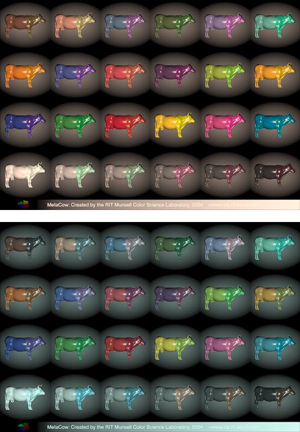 The METACOW test target available for download, for use in imaging system design and evaluation. We ask only that you credit the Munsell Color Science Laboratory in any publications. Note that it is a large image; make sure you are on a decent internet connection for the download. Included in the files are: many GB of fullsize METACOW Glory, Smaller and Easier to Manage MINIMETACOW, Matlab Source Code for Reading and Rendering METACOW, and Much More. Or you can download a smaller version (420x600x77).
Small METACOW Images
Large METACOW Images (500MB file!)

Lippman2000 Spectral Imaging Database
This project is named Lippmann2000 in honor of Gabriel Lippmann who in 1891 devised a method to perfectly reconstruct the spectral content of real world scenes. In spite of Lippmann's invention, a more primitive three-channel model, first demonstrated by James Clerk Maxwell 30 years prior, has dominated the color imaging field. The Maxwellian model, universal in today's color image capture systems, relies on the metameric properties of the human visual system to simulate the appearance of an original color. The capture of full spectral data, while holding advantage over traditional three-channel methods offers new challenges at every point in the imaging chain.

PLEASE NOTE: THESE IMAGES ARE MADE AVAILABLE FOR RESEARCH PURPOSES ONLY. All other uses are prohibited. Copyright remains with PoCS / MCSL. 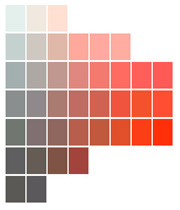 In the 1940's the color science community recognized that the most visually-uniform color space to date, the Munsell Color Order System, had inconsistencies that required examination and remedy. Towards this goal, a large-scale visual experiment was taken with many observers across several continents. The results amounted to an adjustment of the target color coordinates for the Munsell colors. The files here reflect that correction.

There are three files available for download. All are of the same format: six columns of Munsell hue, Munsell value, Munsell chroma, CIE x, y, and Y. The chromaticity coordinates were calculated using illuminant C and the CIE 1931 2 degree observer.In a sense, all three files represent the same set of data, in that all depend on the scaling experiments of the late 1930's.

A report entitled "One Set of Munsell Re-renotations," by Deane B. Judd and Dorothy Nickerson was issues by the National Bureau of Standards (now NIST) in 1967. As the title implies, they proposed an alternative to the original renotation scheme. As far as we know, these did not receive much attention, and their utility is uncertain. The report and associated data table have been scanned. If you use this please let us know! We would be interested in any useful application of the report of data.

One important note is that these data are taken from Wyszechi & Stiles 2nd Ed (1982) and the value scale is base on the original fifth order polynomial (relating Y/Ymgo to V). Modern instruments rererence the perfecting reflecting diffuser, so you may have better results if your multiple the Y values in these tables by 0.975, which is Ymgo, the Y value for the smoked magnesium dioxide reference white.

NONE OF THESE DATA SHOULD BE CONFUSED WITH ACTUAL
MEASUREMENTS FROM A MUNSELL BOOK OF COLOR!

This file should be used for those performing multidimensional interpolation to/from Munsell data. You will need the unreal colors in order to completely encompass the real colors, which is required to do the interpolation when near the Macadam limits.

These are real colors only, "real" being those lying inside the Macadam limits. Specifically, these are those colors listed the original 1943 renotation article (Newhall, Judd, and Nickerson, JOSA, 1943).

This file should be used for a complete mapping between the Munsell system and its CIE equivalents. Note, however, that many of these colors were not used in the original scaling experiments, and are therefore extrapolated or at best interpolated from the test colors used.

Flash! Here are sRGB values and CIELAB for most of the colors in the real.dat file. There are some important notes regarding these data in the spreadsheet.

These are only those colors physically appearing in the 1929 Munsell Book of Color. These data might be of useful for those interested in the input colors used for the scaling experiments leading to the 1943 renotation. Remember though, these are renotation colors of those original patches, not necessarily the colors of the input data used in the visual experiment.

The Diaries of Albert H. Munsell

We are pleased to make these diaries available online. The links below are individual PDFs, each in the range of 0.5 to 1MB. They represent all of volumes A and B in approximately twenty page increments. The index pages list the names of people mentioned in the diaries. Sorry, but there is no subject index. If you would like to create one, we will gladly publish it here!

Note that some PDFs are actually more than 20 pages. We grouped the tiles by the page number in the typed copies. Many pages were inserted with letter notation (4a, 4b, 4c, etc). Also, some of the handwritten pages are unnumbered. You may want to download the document before or after to make sure you get the desired pages.

ORIGINAL COVER SHEET
Below is the text from the cover sheet in the diary binders as received. It was slightly edited for typographical errors.

The diary hereby made available is one kept by A. H. Munsell during the years in which he was developing both the Munsell color system and apparatus and charts by which to explain it.

A typewritten copy was made at the Munsell Color Company in the years 1920-23 from 6 volumes of a handwritten diary kept by Professor Munsell. Drawings and sketches were all hand-traced, and handwriting was inserted where corrections or additions were made in the original. Volume A covers the period 1899 through May 1908; volume B, May 1908 through 1918.

In 1939 the Inter-Society Color council, with permission from the Munsell family and company, deposited a bibliofilm negative of this typed material with the American Documentation Institute, their Document No. 1307. Early documents of this Institute now filed with the photo-Duplication Division of the Library of Congress, Washington, D.C., from which photoprints of microfilm positives may be ordered.

This copy of the Munsell Diary is one of three photocopied by Hunter Associates Laboratory in the spring of 1973 from the original typed copy loaned to Dorothy Nickerson by the Munsell Color Company. The three copies are filed with Miss Nickerson, the Rochester Institute of Technology through Milton Person (these copies are now at the Munsell Color Science Laboratory), and the Hunterlab library.

These files are available for download. All come "as is." We have found them useful, and done our best to ensure their accuracy. If you find out otherwise, please let us know.

Full set of 1nm data, including all of the following:

Note: The above code was debugged to match the output of the Witt spreadsheet.

These files may be useful for your thesis and proposals. The first is a set of Latex templates for proposal and thesis formatting. The second is MS Word documents for the committee and signature pages of MS and Ph.D. theses.