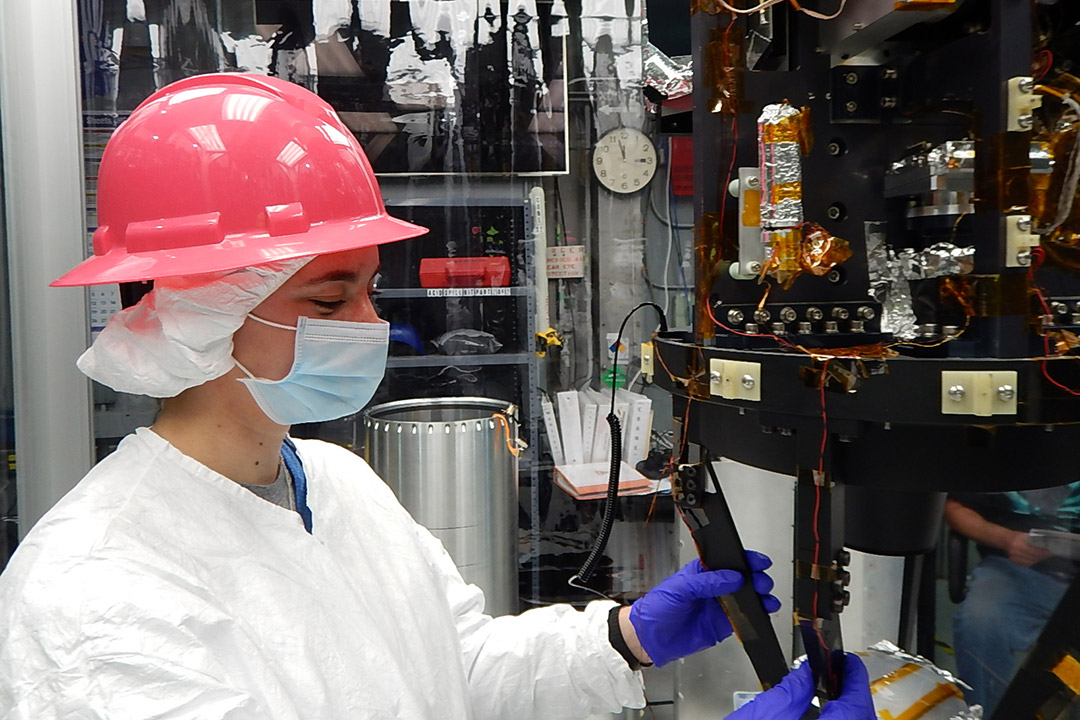 Student Serena Tramm holds the CIBER-2 sounding rocket experiment while lifting it out of the test skin, which had to be removed prior to launch.

Serena Tramm, a Ph.D. student from Palos Verdes, Calif., and Mike Ortiz, a master’s student from Flagstaff, Ariz., are pursuing their studies in astrophysics and have been working alongside Michael Zemcov, assistant professor in RIT’s School of Physics and Astronomy. Together, the team conducted an experiment that resulted in traveling to New Mexico’s White Sands Missile Range for the first CIBER-2 launch earlier this year.

What is the impact of the CIBER-2 experiment and launch?

Tramm: I work on the CIBER-2 sounding rocket experiment with Dr. Zemcov that aims to measure the first epoch of light in the universe — when the first stars and galaxies lit up. During the 15-minute flight of our experiment, we take infrared images of dark patches in the sky to see back into the past.

We had our first successful launch this summer at White Sands Missile Range in New Mexico. I was lucky enough to go to New Mexico for the launch and help with the assembly of the rocket. I also helped with calibration and optical-focusing tests, as well as the recovery of our payload after it returned to the ground. I am currently working with all of our collaborators to organize and lead the refurbishment of the experiment for three future launches.

The beginning and history of the universe are something that many are currently trying to understand, and the results of our experiment would be a great step forward. We are at the forefront of what telescopes like the James Webb Space Telescope hope to uncover. 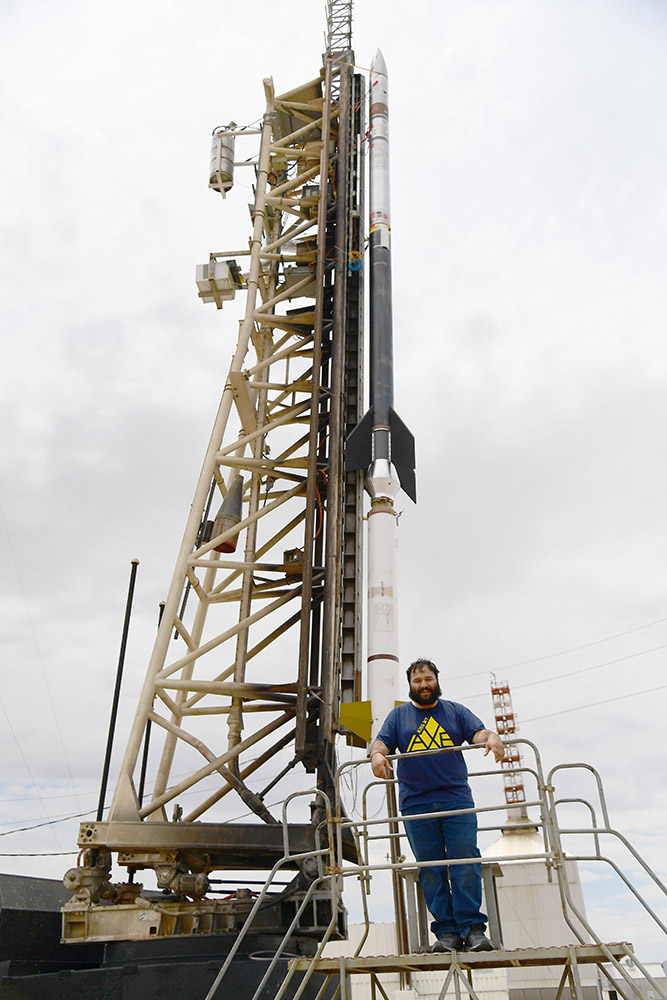 Ortiz: We aim to find these results from CIBER-2 to achieve a better understanding about the universe. As humans, we’re all about moving forward, and I believe to do that, it’s important to understand how the universe evolved during its earliest time. I hope once the mysteries of the universe are pieced together, it will help us realize that we are truly all in this together.

Being deployed to the White Sands Missile Range to help this mission in various aspects was truly a privilege and a dream come true to work with people from NASA and other organizations.

I worked to analyze data and characterize the optical performance of CIBER-2 which measures large-scale energy changes from very faint objects in the universe, on the ground, and in space. I focused on optimization and built a new collimation system, which makes simulated stars for calibration. I have also been working to ensure that NASA’s Attitude Control System was calibrated correctly with our CIBER-2 payload for the launch of NASA’s Black Brant IX sounding rocket. The fields that we are viewing are areas in the sky that have very few galaxies compared to surrounding areas.

How did you get involved in this project?

Tramm: I started working with Dr. Zemcov when I was admitted to the Ph.D. program at RIT. I was put into his research group because their work on instrumentation design and my background in mechanical engineering sounded like a good fit. I am also interested in researching cosmology, which was what his team focuses on. I have to say, as well, that his group is the perfect place for me to pursue my passion for experimental astrophysics.

Ortiz: I first started working with Andrew Robinson, director of RIT’s astrophysical sciences and technology Ph.D. program, and Michael Richmond, a professor in the School of Physics and Astronomy, in Active Galactic Nuclei research. An AGN is the center of a galaxy that produces bright luminosities because of the infalling material to the central black hole. I switched over to Professor Zemcov’s research team where I wanted to learn more about cosmology and focus on instrumentation. I became interested in the instrumentation part of astrophysics here at RIT. My course work, along with my interactions with the professors and discussions about old and modern telescopes and detectors, has really opened up my eyes to the possibilities in this field.

How does your research tie into your future plans or career goals?

Tramm: My work with Dr. Zemcov will prepare me to work in a plethora of fields, some of which include instrumentation design, systems engineering, and project integration. My goal would be to end up somewhere such as NASA or JPL where I could continue to build instruments to search for explanations of the universe and its structure and history. My aspirations would be to continue to work on solving the mysteries of our universe, including how it started, why we are here, and what processes occurred in the timeline of its history.

Ortiz: Working with Professor Zemcov is the best training ground for me to gain the skills necessary to develop scientific payloads. I routinely work with engineers and scientists, gaining experience in the lab and through data analysis from past observed runs. I would like to prepare myself for industry in order to work on the development of satellites, other payloads, and any space-bound instrument.

What have you enjoyed most about your graduate degree program at RIT?

Tramm: I love the community here. The astrophysical sciences and technology program has incredibly supportive staff and students, and they truly want you to succeed. This is something that isn’t present at many graduate universities, as they usually have competitive environments. I have always felt welcomed and supported by everyone in the program, and I couldn’t imagine pursuing my passion in any other program.

Ortiz: Having a small class environment really made it more personal and helped me better understand some of the complicated subjects that we come across in our field.