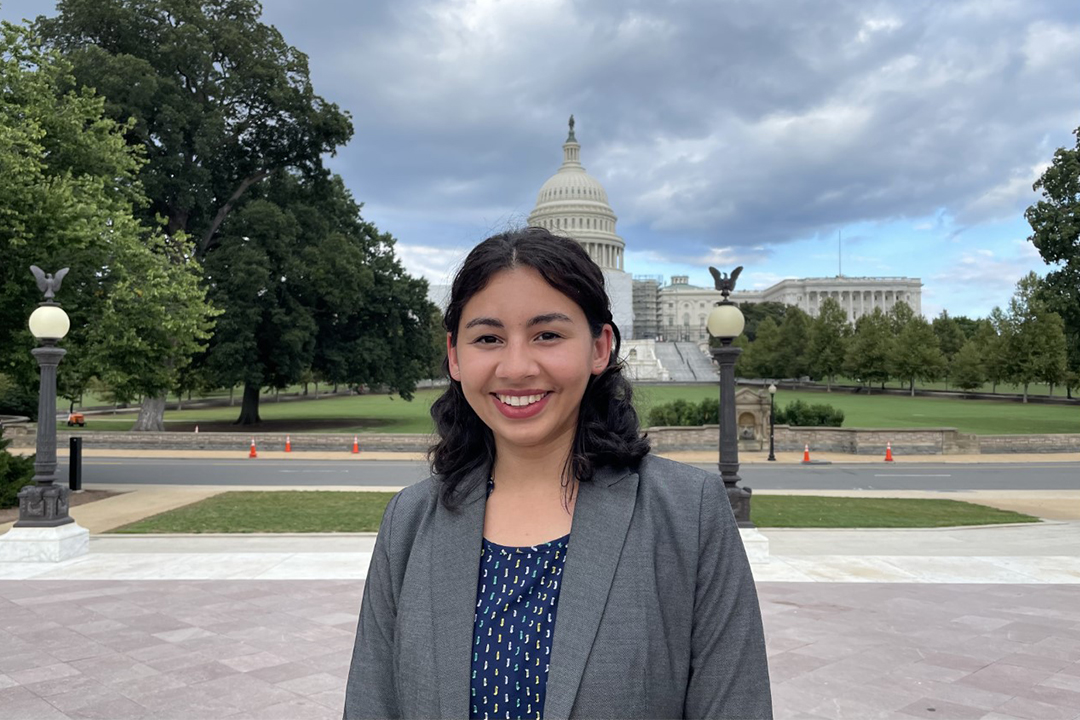 RIT biotechnology alumna, Dr. Nicole Arroyo, recently embarked on an exciting new phase of her science career. After graduating from RIT and earning her Ph.D. in immunology from the University of Washington, Nicole was selected to be a Science and Technology Policy Fellow (STPF) from the American Association for the Advancement of Science (AAAS). She is part of the 50th class of Fellows along with 300 highly trained scientists and engineers.

Nicole was placed in the National Institute of Allergy and Infectious Diseases (NIAID), one of the largest institutes of the National Institutes of Health (NIH). “I’m in the Legislative Affairs and Correspondence Management Branch of the Office of Communications and Government Relations. Essentially, we serve as the liaison between NIAID and other government entities, primarily Congress and the Government Accountability Office. We handle scientific and operational inquiries about research conducted at NIAID or funded by NIAID at other institutions.”

The prestigious AAAS fellowship is a unique opportunity for scientists and engineers to learn about policymaking while providing their subject matter expertise and analytical skills to the policymaking process. Nicole explained that although this position is several degrees removed from bench science, their work requires deep knowledge of current research and the ability to communicate science to a non-scientific audience. She also mentioned the added hurdle of working within a large bureaucracy. “Being curious about the policymaking process is a good way to learn nuances that are important to get things done. This work is quite reactive to the discussions about science in the media and government, so we communicate with different people and answer different types of inquiries everyday.”

Nicole cites her training in the biotechnology program at RIT as a key starting point in becoming a Science Technology Policy Fellow. She was initially excited by the program because it contained important fundamentals about cell and molecular biology and showed a clear commitment to problem-based learning and hands-on training that she did not find at other universities.

“Now that I’ve seen the training at other institutions, both as a student and as a faculty member, I can attest that RIT students are more prepared to step into a laboratory and be productive. Understanding the theory of a technique is not a replacement for being able to perform it and to troubleshoot it when things, as often occur in science, go wrong.” While at RIT, Nicole participated in undergraduate research with Dr. Paul Craig and also secured research positions for the summer. Nicole’s mentors at RIT included Dr. Thomas Frederick (emeritus) and the late Dr. David Lawlor, who she says were critical influences on her academic success. “I took their immunology and advanced immunology courses, which started my path to my Ph.D. But more importantly, they exemplified excellent science communication. I’m sure whatever they taught would have grabbed my attention because of how they presented it. Their enthusiasm and unassuming manners of teaching inspired my communication style.”

Nicole's advice to students who want to pursue this field is to cultivate mentors who care about them as a person. "When looking for my graduate lab, I was interested in many groups' research questions. I decided to choose the lab with the principal investigator (PI), who I thought would be the best person to work for and would be best positioned to provide me with what I needed as a student and a human. I think science is a field where we are expected to sacrifice much to succeed. This is a culture that is changing, albeit slowly. Find the people who are fostering that change."

Finally, Nicole notes it is an exciting time to study and work in immunology. In the wake of the COVID-19 pandemic, companies see more clearly how this work contributes to other unsolved problems, such as cancer and autoimmune disorders. "Today, companies, nonprofits, and government agencies with even tangential engagements in public health want immunology experts on their teams."