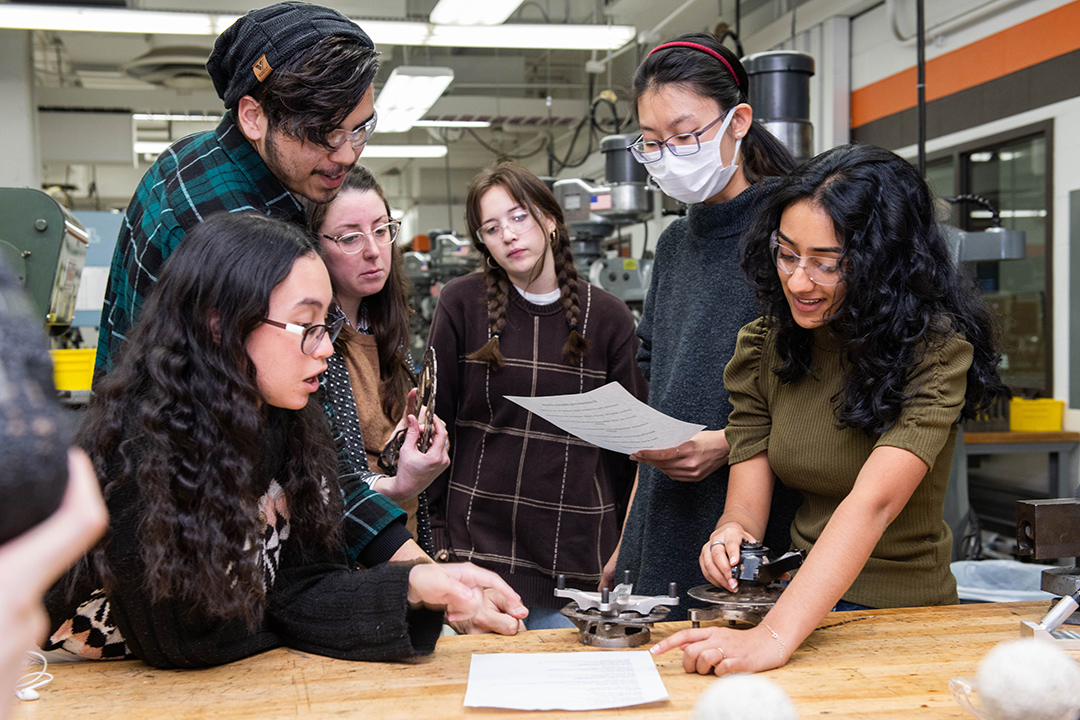 Students entering their first year of college face many unknowns. But a unique program at Rochester Institute of Technology helps new students learn more about college life, their peers, and themselves. 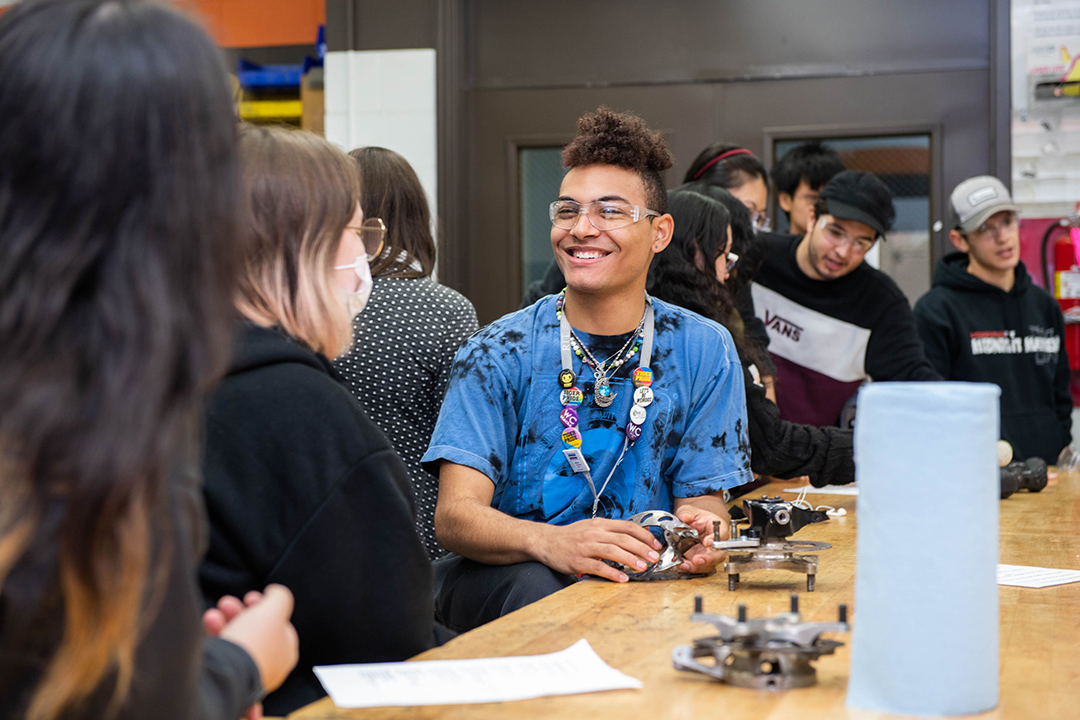 First-year student Elizabeth Irons, a game design and development major from Pasadena, Md., attends an RIT 365 session in the mechanical engineering technology lab to get a taste of what the RIT Baja team does to build their race cars.

For the past three years, RIT 365 has been required for all students in their first semester, with weekly sessions categorized in three topics: “plan,” “do,” and “reflect.” The activities have changed and evolved during that time to reflect university priorities, such as diversity and innovation, as well as changing student interests and needs.

Their “do” sessions, hands-on experiences hosted by groups and individuals from across campus, include viewing and discussing films about diversity, sharing about items that are important to them, or workshops with clubs and classes they may never have otherwise experienced. They also include an informal interview with a faculty member during office hours.

“As far as we know, this is a one-of-a-kind program in the nation,” said Daniele Brown, director of Year One Programs at RIT. “There’s nothing else that is building that sense of community with experiential learning for first-year students. This genuinely has the sole purpose of building connections and immersion in the community.”

Groups learned about entrepreneurial opportunities in a Shark Tank-style exercise in the Simone Center for Innovation and Entrepreneurship, had a labyrinth exercise in the Center for Spirituality and Religious Life, experienced Wadaiko drumming, learned lessons about fire safety, visited RIT Ambulance, and learned how crafts can lead to activism.

“The value of the course is not always how exciting the experience is, but it’s the reflection of what the students can take away from the experiences,” Brown said. 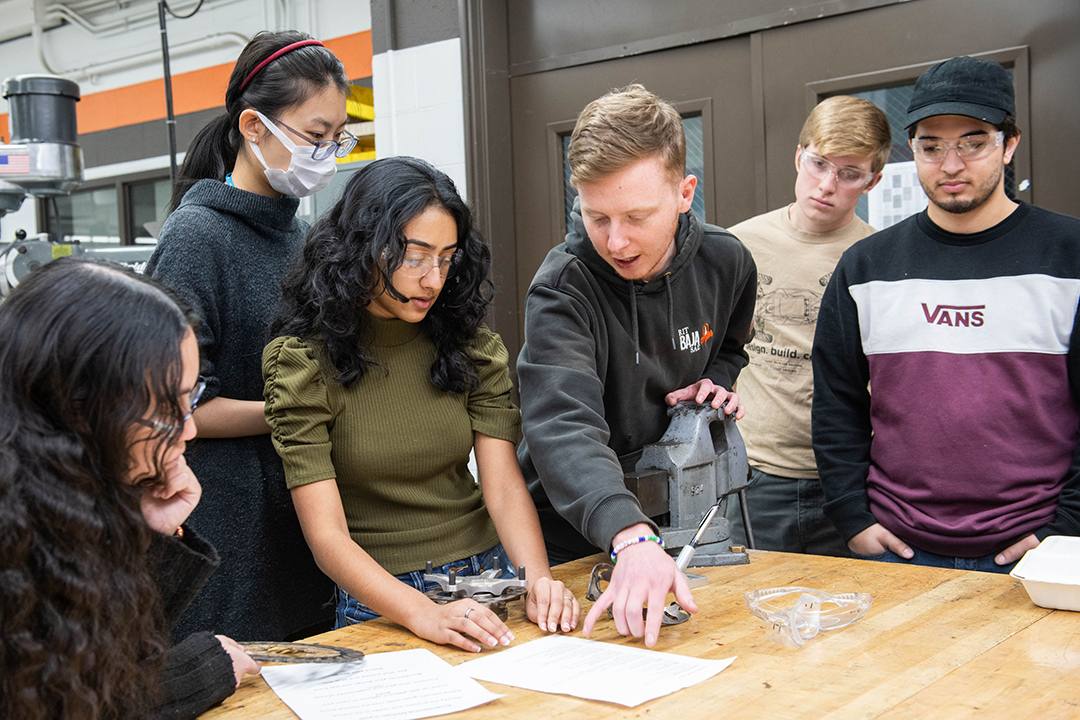 During one recent “do” session, Alaina Mupparthi, a computer science major from Santa Clara, Calif., attended a mechanical engineering technology lab, home to RIT’s Baja team, with about two dozen classmates. The intent was to learn how design thinking applies to build race cars, with critical thinking needed to help design and make decisions as a team.

The students were broken into six groups to discuss challenges members of the team have encountered. They were given options of possible fixes, with pros and cons for each suggestion related to brake rotors, steering wheels, clutches, and suspension arms. In some cases, the options of what materials to use were given, be it aluminum, stainless steel, carbon fiber, or titanium.

“Every year we go through these tests, and every year, it gets more fun,” said Baja team member Brendan Conneely, a fifth-year mechanical engineering technology major from Dix Hills, N.Y.

Mupparthi immediately picked up and examined different types of steering wheels on the table and gave her opinion on what to use.

“We need to be choosing an option and defending why we chose it,” she said. She discounted a larger steering wheel because it would be unwieldy, especially if the driver had small hands.

“Good work everyone,” Conneely told the students at the conclusion of the 50-minute session. “We hope you learned something about mechanical engineering and design.”

Mupparthi said she enjoyed the experience. “I’m interested in technology, in general, and this was something new for me. I wanted to get involved.”

Prior to participating in a diversity theater film workshop, she said she wasn’t sure what to expect. She watched a film and class members discussed their backgrounds, including a facilitator who talked about her perspective as a Caucasian woman from a small town where diversity is minimal.

“It was a refreshing conversation, especially since my background is almost the complete opposite,” Mupparthi wrote about the experience in her reflection portfolio. “It reassured me because it was also kind of my thoughts on how RIT would be as an environment for me for the next five years, and reaffirmed my beliefs that were starting to take root.” 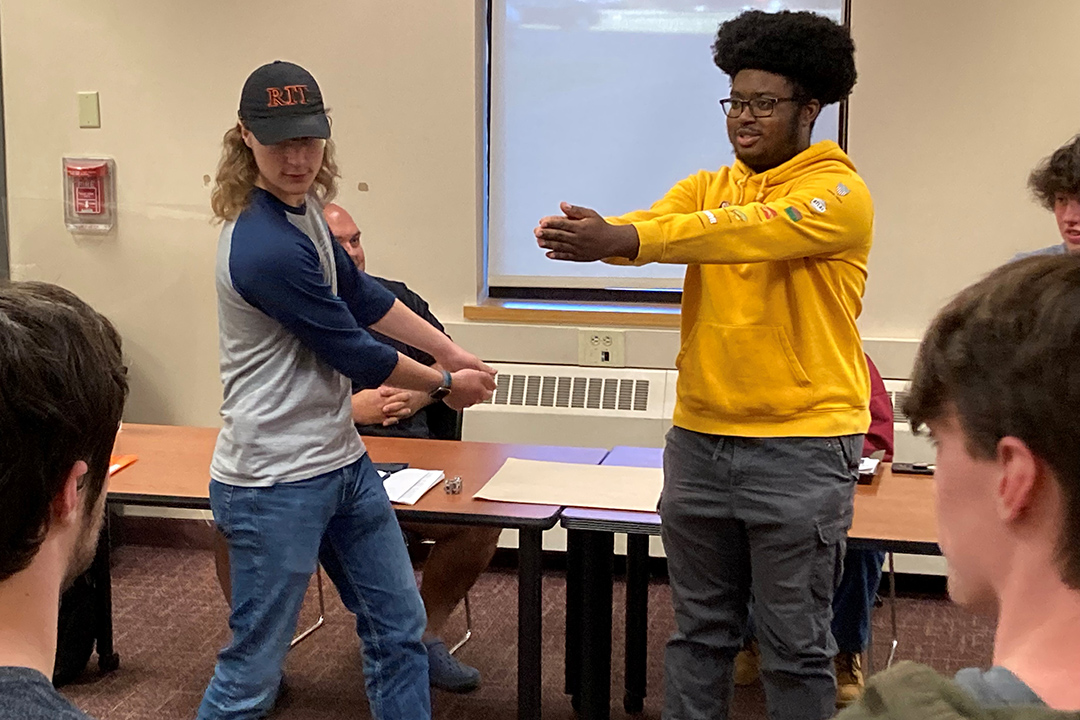 During another session in Kate Gleason Residence Hall, Henry Miller, a mechanical engineering technology major from Binghamton, N.Y., volunteered for each game his class played during an introduction to improvisation, hosted by members of RIT Improv.

In one game, the volunteers had to give an imaginary gift to a neighbor, and talk about it. Another game had them sitting on tables, constructing sentences one word and student at a time.

“We’re here to have fun,” said David Calvet, director of promotion for RIT Improv. “This helps you with day-to-day life, to think under pressure. No matter what gets thrown at you, you will be able to adapt. This will teach you a lot of soft skills and you might be interested in doing this with your friends or our club.”

Emma Rohloff, a third-year applied arts and sciences major from Austin, Texas, and another member of the club, told the students it’s important to be assertive, yet it’s also important to work with others.

“This is all about teamwork and creating things with each other,” Rohloff said. “Sometimes you will be working with somebody and you’ll need to be going with the flow because you always aren’t going to get your way.”

Miller said he wasn’t always outgoing. He considered himself an introvert and spent much of the time during the height of the COVID pandemic isolated, building a snowplow-powered tricycle.

But during another RIT 365 session, when students were asked to bring a meaningful item to talk about, Miller realized he became more outgoing. He brought the key to the tricycle he built, which helped him open up to people interested in his creation.

“That has been a big part of my life,” Miller said.

He said RIT 365 has taught him “a lot about what is available for students on campus, from academic support to clubs, and mental health support. There’s a lot of stuff to do and ways to get involved on campus.”

Miller said he looks forward to his RIT 365 classes because of his “awesome” peers he meets with every week.

“I’ve felt very included and welcomed by everyone,” he said. “It’s been very interesting to learn about everyone and see the differences and similarities in our paths to RIT and our lives outside of the class. I have struggled with self-control and filtering my communication for a long time, and while I’ve gotten better at it over the years, my RIT 365 experience has helped me during the class to stay on course instead of going off on a tangent. At the end of the day, I feel lucky to have gotten to spend time with such an amazing, kind, and diverse group of people and RIT 365 has been a great part of my first semester because of them.”