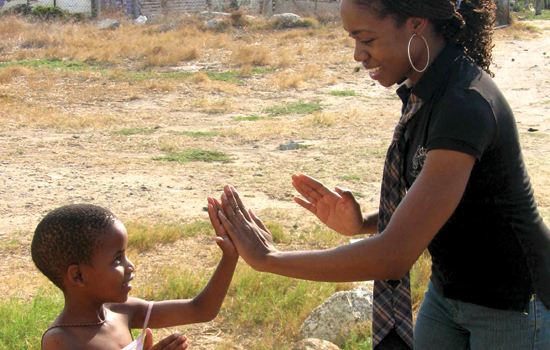 Deana Brown, a graduate student, plays with a young orphan she met at a township in South Africa.

Many take safe drinking water for granted, but in developing countries like South Africa, 40,000 people die each year from contaminated drinking water. Children and those with weak immune systems are the most vulnerable.

Deana Brown, a master’s degree student in RIT’s Information Technology program, who graduates May 22, spent 10 weeks in South Africa for her thesis. She designed and tested a water-quality-information and cell-phone-alert application that could ultimately save lives.

Witnessing people living in marginalized communities is not new to Brown. A native of Jamaica, this is a reality in her country.

“In spite of their living conditions, people who live in impoverished areas are still people—proud and ambitious,” says Brown. “They simply need ‘a hand up not a handout’—the motto of one of the adult vocational schools I visited in the South African Township of Khayelitsha. Exposure to this propels me to act, not just empathize.”

And act she has. Brown is involved with the Aquatest Project, which is funded by the Bill and Melinda Gates Foundation to develop a low-cost water-quality test and information-management solution for developing countries.

Brown joined the Information and Communication Technologies for Development Lab at the University of South Cape Town. She worked under the guidance of computer science professor Gary Marsden, renowned for his work in this particular area, and Ulrike Rivett, a civil engineering professor. Brown designed and evaluated a prototype application that people could download on cell phones. She chose this platform because nearly every person in South Africa has a cell phone and can cheaply access the Internet over the network.

“Taking a complex water quality test report and putting it on a cell phone in a simple and highly visual format makes it language independent and more accessible to people living in rural areas and to users with low literacy levels.”

To communicate the water test results, culturally appropriate symbols like a stop sign would appear on the cell phone indicating the water is contaminated. The application also informs consumers of precautionary measures, such as boiling water before use.

Brown hopes that other developing countries could implement a similar alert system using her prototype as a template.

Throughout her academic career at RIT, Brown maintained a 4.0 grade point average. Outside of her studies, she served as an ambassador for the Women in Computing Group and also earned scholarships to attend the Google Workshop for Women Engineers and the Grace Hopper Conference.

“My time at RIT has positively impacted my life and my career goals. It was here I was first exposed to the area of human-computer interaction and fell in love with it. I hope to pursue it at the doctoral level. The faculty, staff and students alike showed a genuine interest to ensure I had the best graduate school experience and help me accomplish the goals I set. I definitely feel like I have.”