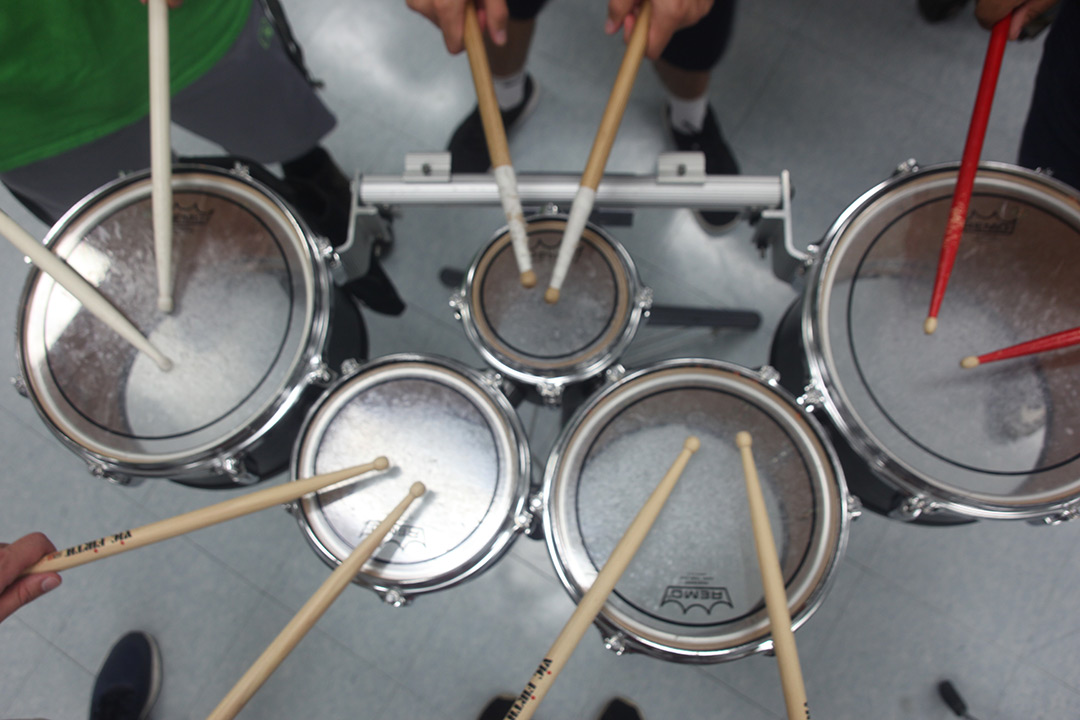 RIT drumline accepts all students who enjoy coming together and making music regardless of skill level.

Tim Coon, a fourth-year software engineering major from Brockport, N.Y., uses music as a way to relax and spend time with friends once classes are done for the day. Coon is an active member of the RIT drumline, as well as the Jazz Ensemble, the RIT Pep Band and the newly created Game Symphony Orchestra. This year for the drumline, Coon has taken on the role of treasurer on the executive board, or e-Board, after serving as the vice president/director of the front ensemble for two years. Although Coon knows how to play many instruments, including most percussion instruments and the piano, he mostly plays mallet instruments or auxiliary instruments for the drumline, like the xylophone or cymbals.

Every year, the RIT drumline recruits new players, and joining can be easy. By attending one of their rehearsals, which are held at 9 p.m. every Thursday and every other Tuesday, those interested can get a feel for what the group does as well as try out different instruments. The group accepts anyone with a passion for making music regardless of skill level.

For details on how to join the RIT drumline, visit the group’s rehearsal at 9 p.m. Thursday, Sept. 6, in the band room, SAU A120, or email drumline@rit.edu.

Question: Why did you decide to join the RIT drumline?
Answer: When I was first coming in as a freshman, I didn’t really know what I was doing on campus. I went to the club fair looking for things to get involved with and I saw a table that said RIT drumline. I knew how to play the drums, so I went over and talked with them and found that it was something I really wanted to pursue. Once I decided that, I just kept with it for the next few years, made some friends along the way, and now I’m here.

Question: Did you have to go through an audition process to join?
Answer: It wasn’t a super hardcore audition, it was very informal. I just went in and tested things out to see what I liked. There’s two different sections to the drumline, the battery and the front ensemble, also called the pit. During the first few sessions, I got to play different instruments to see which section and instrument I wanted to play. I already had experience playing percussion instruments, so I had a pretty good idea of the direction I wanted to go in. Given my experience with piano, I really liked the front ensemble because I could play more keyboard-like mallet instruments.

Question: Can anyone join the drumline?
Answer: Absolutely! There are a plethora of different majors who are a part of the drumline. We have computing majors, engineering majors and film majors in our group, to name a few. We are going spend a lot of time on the fundamentals of playing in the early part of the semester, so even people with very little drumming experience can come play with us. Really anyone can join. It doesn’t matter what your major is or your skill level, anyone can make music if the drive is there.

Question: What are some things you’re able to do as a member of the RIT drumline?
Answer: We compete in the New York State Percussion Circuit in the spring semester, where we go to meets in the Greater Rochester area, and later we travel to Syracuse, N.Y., for the championships. We have a show we work on throughout the year to play at these competitions. The show is also performed at Imagine RIT, along with some other songs that are more widely known. Some of our staples aside from the showtunes are the theme song from the Big Bang Theory, “Radioactive” by Imagine Dragons, and even a medley of Mario tunes from the video game. We’re planning on playing around campus more in the future, like at SpringFest and other events.

Question: What keeps you coming back to be a part of the RIT drumline?
Answer:  The music itself is really fun to play, especially because you don’t often get to play in a percussion-centric group. It’s nice to be able to have more technical pieces where we as percussionists can show our prowess. Also, a lot of my friends that I’ve made at RIT I met through the drumline. Friendship and comradery is what really keeps bringing me back. I didn’t know a lot of people coming in freshman year, but a lot of the people who I met in drumline my first year are still here and we get to see each other all the time. We all look out for each other and we’re able to have a good time. We do competitions, but at the end of the day we’re just all college kids having fun playing drums. 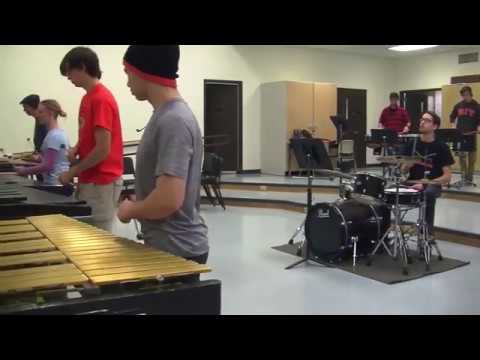