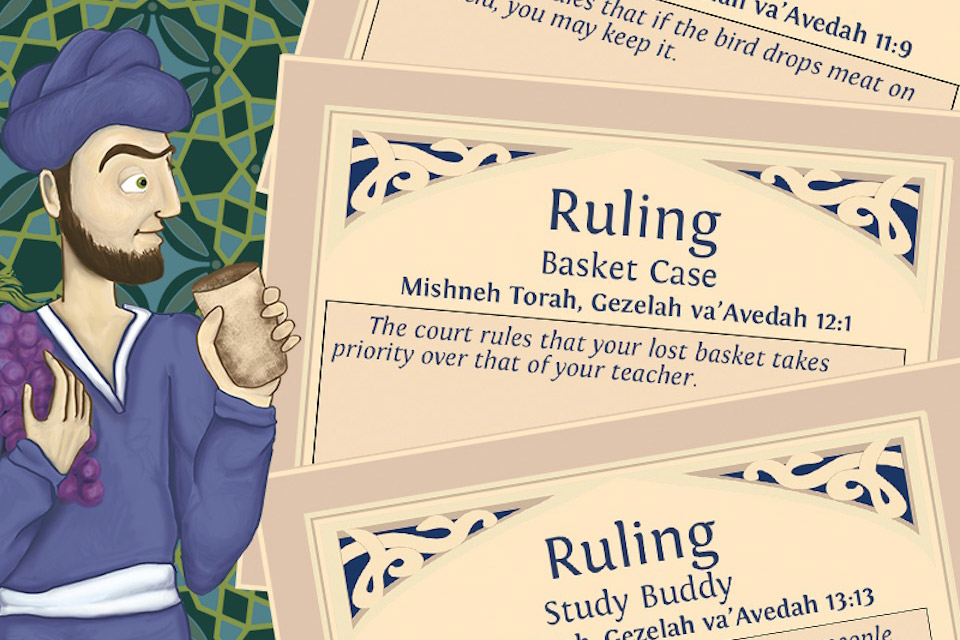 Lost & Found: Order in the Court – The Party Game, a tabletop game created by an RIT team, has been nominated for an award at IndieCade 2019, which is known as the Sundance Film Festival for video games.

Lost & Found: Order in the Court – the Party Game, a tabletop game created by a Rochester Institute of Technology team, has been nominated for an award at the IndieCade Festival, held Oct. 10-12 in Santa Monica, Calif. IndieCade is the premier event for independent games and is known as the Sundance Film Festival for video games.

An international panel of judges accepted and nominated the game, which aims to promote and enhance the public understanding of religion and law, for a Spotlight Award in the Tabletop category of the festival. The annual IndieCade Awards ceremony will be held Oct. 11.

“Being accepted to IndieCade was a dream of our team,” said Owen Gottlieb, executive producer of the game, lead researcher and RIT assistant professor of interactive games and media. “To be nominated is exhilarating. With all the years of work (more than five), by students and faculty, it is so gratifying to be recognized by such a prestigious event of groundbreaking, deeply meaningful, innovative and thoroughly creative games.”

More than 50 games were selected for the IndieCade Festival, including titles created by developers and teams from the U.S., Canada, Australia, Spain, the U.K., China and Ireland, and playable across PC, Mac, Android, Oculus Rift, PlayStation and additional platforms.

“This is about the highest honor we could have hoped for, for this project,” said Ian Schreiber, core mechanics designer for the game and RIT assistant professor of interactive games and media. “It feels validating, exciting and a bit surreal—we’re still processing this emotionally.”

Lost & Found: Order in the Court – The Party Game, a tabletop game created by a RIT team, has been nominated for an award at IndieCade 2019, which is known as the Sundance Film Festival for video games.

While at the festival, the team will be demoing the game and looks forward to meeting other developers and trying out their games.

There are currently two entries in the Lost & Found game series, created by an interdisciplinary group of researchers, designers and developers based at RIT, and collaborating with scholars at six other institutions including Vanderbilt University and the Harvard Divinity School.

The second game in the series, Lost & Found: Order in the Court – The Party Game, uses the party-game genre to have players compete by creating stories about possible reasons behind the formation of medieval laws, as written in the Mishneh Torah by Moses Maimonides, the Jewish philosopher and physician. Played for humor, the game generates curiosity about the laws of lost and found objects and quickly moves players into discussing the possible reasons for and meaning of the laws.

The games, available for purchase at lostandfoundthegame.com, are distributed through RIT’s MAGIC Spell Studios. Lost & Found is available for $40.99 and is geared toward high school and college-aged students due to its level of strategic complexity. The second, Order in the Court – the Party Game, is available for $35.99 and is accessible for junior high students as well as older teens and adults.

The games are the result of nearly five years of research and development with help from graduate and undergraduate students, and faculty in RIT’s School of Interactive Games and Media and the College of Art and Design. Gottlieb said he views the games as teaching tools for universities, high schools, libraries and museums.

The project was developed in collaboration with the Initiative in Religion, Culture and Policy @MAGIC, housed within RIT’s Center for Media, Arts, Games, Interaction and Creativity (MAGIC). Gottlieb is the founder and lead research faculty of the initiative, which cultivates new research focused on games, religious literacy, the acquisition of cultural practices and the implications on policy and politics. Also credited in the production of both games are the Golisano College of Computing and Information Sciences and RIT’s Office of the Vice President for Research. The digital prototype version of the first Lost & Found game was supported and funded by the National Endowment for the Humanities.

The third game in the series is now in development and deals with Islamic laws of the period and locale. It will be compatible with the original strategy game Lost & Found, which is centered on Jewish laws.