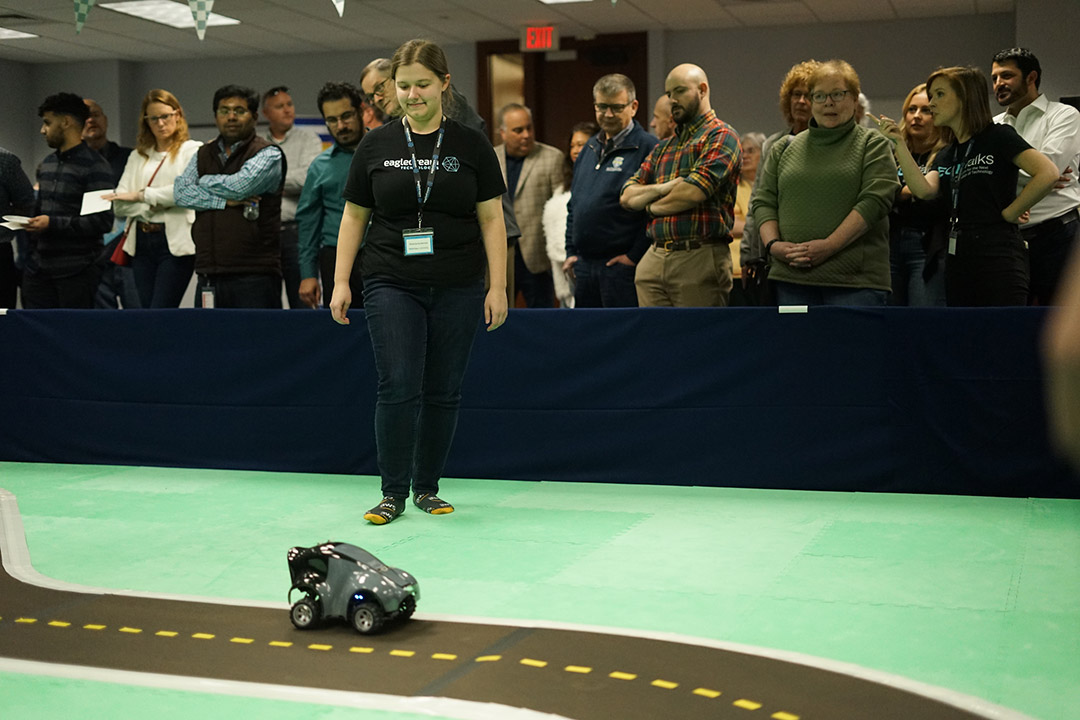 A self-driving miniature car race will be held at RIT March 4. Student coders from RIT, MCC and University of Rochester are competing to see who can program the fastest AWS DeepRacer car.

Rochester-area programming students are racing to see who can code the fastest self-driving miniature racecar. The winner will be crowned at a race March 4 at Rochester Institute of Technology.

Seven teams from RIT, Monroe Community College and University of Rochester are using their machine learning and artificial intelligence knowledge to code and test self-driving cars. The winner of the race is the team that completes the fastest lap around the more than 50-foot-long track.

Spectators are invited to watch the championship race and learn about self-driving cars at the DeepRacer Challenge: Battle of the Schools. The free event is 3–5 p.m. March 4 in Ingle Auditorium, on the RIT campus.

The challenge is run by RIT and EagleDream Technologies, a cloud-native transformation company and premier-level Amazon Web Services (AWS) partner based in Rochester, N.Y. The event uses the AWS DeepRacer, an autonomous 1/18th scale racecar designed by AWS to test reinforcement learning models by racing on a physical track.

“A lot of computer science happens at a computer or a whiteboard,” said Sam Kuzio, a fifth-year RIT computer science student from Williamsport, Pa. “What makes this competition so great is that we get to see the things we’re doing work in the real world.”

The self-driving cars use reinforcement learning, a type of machine learning that allows software to automatically determine the ideal behavior within a specific context, in order to maximize its performance. The 10-inch-long car uses cameras to view the track and a reinforcement model trained in a simulated environment to control throttle and steering.

In preparation for the event, the teams are tasked with writing code that will “reward” the algorithms when they do something right.

“It’s like training a dog, where you give him treats for staying on the correct path,” said Kuzio.

Students get about three weeks to build their models, code in Python, train their AI and race the cars virtually using AWS. The first time the students actually see the car in person will be on race day March 4.

“AWS provides us basic models that allow the car to follow the centerline,” said Saket Upganlawar, an RIT computer science master’s student from India. “But we need to reward our car for good decisions, including controlling the speed of steering and going around a curve at the optimal angle. There are many different parameters to consider when tweaking our model.”

Kuzio and Upganlawar are both students in Thomas Kinsman’s Advanced Computer Vision course. Kinsman, a lecturer of computer science in RIT’s Golisano College of Computing and Information Sciences, is coaching two teams and is encouraging his students to learn about the mathematical modeling principles and path-planning algorithms. Two of these concepts include the curves of least time and curves of least energy.

Each team will have five minutes to complete as many laps around the track as they want. The team with the fastest lap, while staying on the roadway, wins. The top team will earn a sportscar weekend at Sahlen’s Six Hours of The Glen race at Watkins Glen International.

EagleDream decided to create the Battle of the Schools challenge as an educational experience for Rochester-area students, after holding their own race within the company last fall. EagleDream said that many of its leaders are RIT alumni who started through RIT’s co-op program.

“I am thrilled for the opportunity to bring the DeepRacer Challenge to RIT,” said Bob Moore ’91 (applied science and technology), CEO of EagleDream and an RIT Trustee. “I look forward to meeting the teams from all the colleges and discussing with them how they approached the challenge. It’s exciting to see the community come together to embrace these technologies, inspire students and empower thought-leaders to think about what is really possible with AI and machine learning technologies.”

AWS has an official DeepRacer League, for people to code and race the cars. The world record for an AWS DeepRacer lap is 7.44 seconds.

“AWS DeepRacer is a great way to get your hands around machine learning, literally,” said Brien Blandford, Solutions Architect at Amazon Web Services, who will speak at the event. “It inspires you to think about other use cases for machine learning and reinforcement learning, such as ‘how could I better move that robot arm’ or ‘is there a better way to control traffic patterns?’”