Satish Kandlikar recognized as a top researcher in his field by Research.com 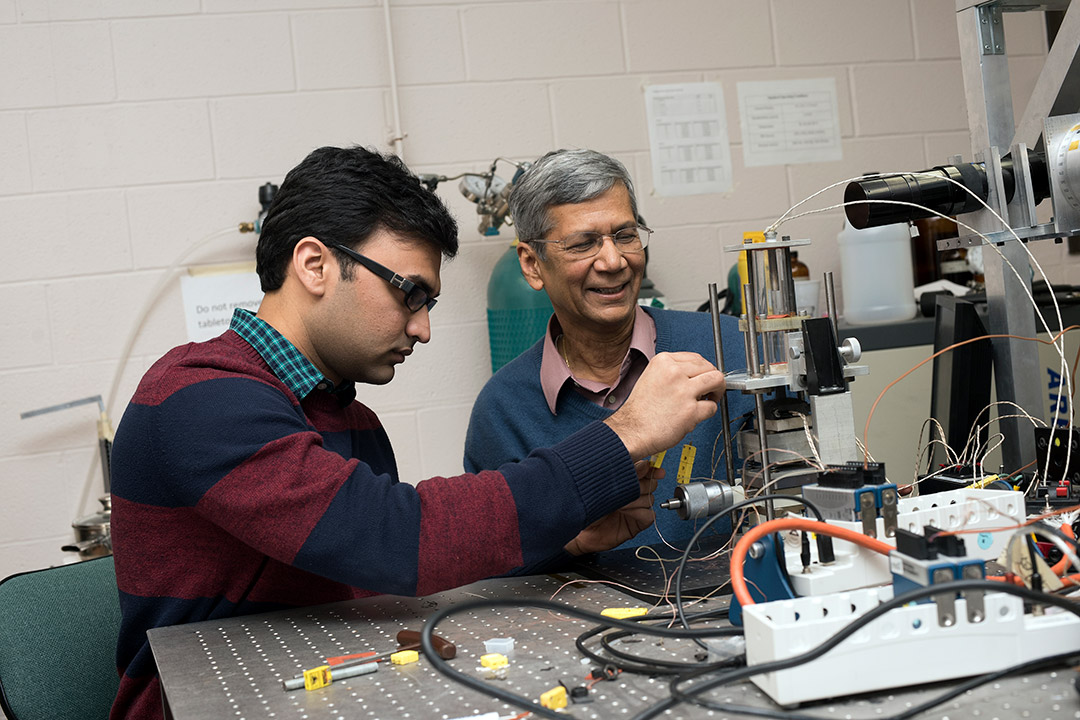 Satish Kandlikar, right, professor of mechanical engineering at RIT, was recognized as one of the top researchers in the country by Research.com.

Satish Kandlikar, professor of mechanical engineering at Rochester Institute of Technology, has been recognized by Research.com as one of the country’s top researchers in his field.

This first edition of the national and international rankings of more than 3,600 mechanical and aerospace engineering scientists from around the world included Kandlikar, who ranks 31st in the U.S., and 54th in the world ranking.

Research.com is a central portal with links to numerous peer-reviewed journals, national and international conferences, and a repository of new research by scientists since 2014. Scholars were ranked according to disciplines and within each of these categories by scientific contributions to specific fields based on research findings, journal publications, conference proceedings and citations, as well as awards and achievements.

Kandlikar has made pioneering contributions in the area of pool boiling heat transfer and fuel cell technology. He has also developed infrared imaging technology to better detect breast cancer, specifically tumors hidden behind dense tissues. This latter research was just recently funded with a grant from the National Science Foundation under an SBIR grant. The technology has been developed at RIT in conjunction with partners at Rochester General Hospital.

He has published nearly 300 journal and conference papers. Research.com indicated that his more than 23,000 citations were by peer researchers from universities such as Purdue to those in Singapore and Switzerland. Kandlikar is a fellow member of American Society of Mechanical Engineers and founded the ASME Heat Transfer chapter in Rochester, N.Y. He is the recipient of numerous awards, including RIT’s Eisenhart Award for Outstanding Teaching and Trustees Scholarship Award. He has made significant contributions to STEM education, as founder of RIT’s E-cubed Fair, an event hosted annually at the university since 1991 with the support of engineers and scientists from RIT, Nazareth College, and other institutions.

In 2020, he was named one of RIT’s Distinguished Faculty given to tenured faculty who have shown continued excellence over their careers in teaching, scholarly contributions, lasting contributions in creative and professional work, and service to both the university and community. Outside of the university, he has been recognized as Engineer of the Year Award by the Rochester Engineering Society and received the Heat Transfer Memorial Award from ASME.