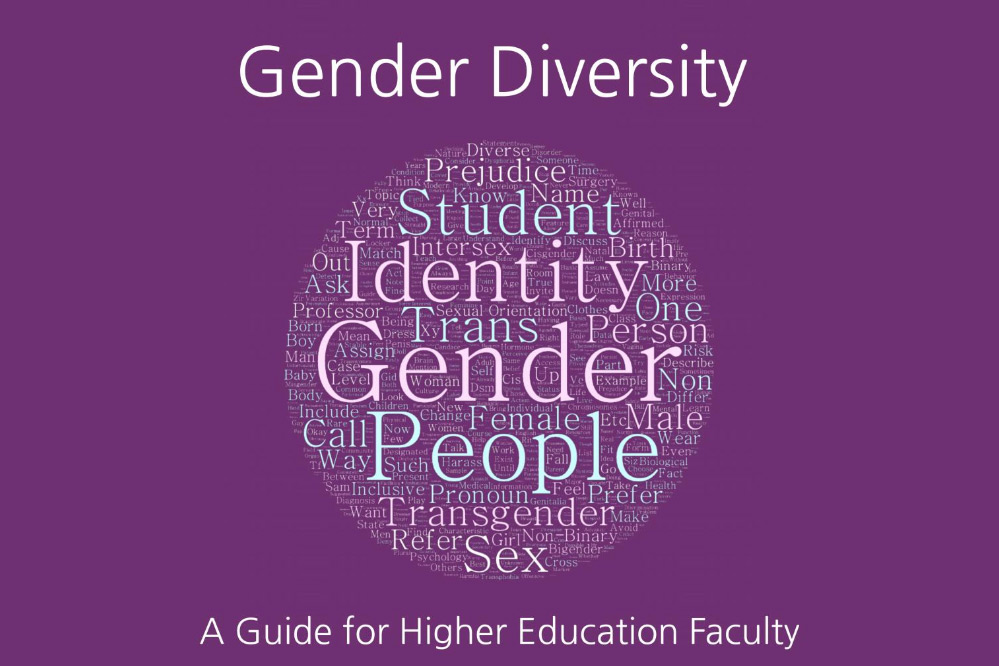 Originally published in 2016, the guide is meant to serve as a base-level reference book for learning about gender diversity, labels and pronouns, and the do’s and don’ts of talking about gender identities. The guide is given to all new RIT faculty members and a digital version is also available on the Q Center website.

Welcoming transgender and nonbinary students doesn’t just mean providing gender neutral accommodations, says an RIT associate professor of psychology. It means learning more about gender identity and making sure faculty and staff provide an inclusive environment for all students both in and outside of the classroom.

To help RIT achieve this goal, Assistant Professor Alan Smerbeck wrote Gender Diversity: A Guide for Higher Education Faculty. Now, Smerbeck is working with Q Center director Chris Hinesley on a second edition, which is set to come out in spring 2020.

Originally published in 2016, the guide is meant to serve as a base-level reference book for learning about gender diversity, labels and pronouns, and the do’s and don’ts of talking about gender identities. The guide is given to all new RIT faculty members and a digital version is also available on the Q Center website.

“I think that most people want to be kind and respectful of others. When they’re not—sometimes that’s from a real intractable difference in ideology— but very often it’s due to a lack of awareness,” said Smerbeck. “I think we can make a big difference in the lives of transgender and nonbinary people by targeting that lack of awareness.”

For the second edition of the guide, Smerbeck and his collaborators plan to rework some of the content for clarity, add updated information about state and federal laws that impact transgender and nonbinary communities, add updated terminology and expand the guidelines to include situations that staff members may encounter in addition to the faculty recommendations.

Smerbeck believes that the guide can help transgender and nonbinary students make connections with more people on campus. If faculty members follow the guide and make it known that they are an LGBTQ+ ally, students may find them more approachable if they ever have issues with harassment or discrimination.

“As bad as harassment and discrimination are, having a strong social support system really diminishes it’s harmful effects,” said Smerbeck. “Having more people on your side really increases the likelihood that you’re going to actually make a step toward changing something.”

Since publishing the guide, Smerbeck has been contacted by several other universities and commercial businesses asking for permission to use it in their own workplace. Additionally, he has been asked to speak at multiple conferences, including the National Women’s Studies Association conference and the Mid-South Sociological Association conference.

Smerbeck worked in collaboration with Empire Justice, the RIT Q Center, the women’s and gender studies program and the Psychology Women and Gender Minority Mentoring Group to publish this guide.

Hinesley, also assistant director of the Center for Campus Life and Student Affairs, was a key player in the development of this guide.

Hinesley has been responsible for Safe Zone training on campus since 2011 and has reworked the training significantly so that it covers the experiences and concerns of transgender and nonbinary people in addition to discussing different sexualities. He has also worked closely with LGBTQ+ organizations on campus, like OUTspoken, Tangent and other groups run through the Q Center.

“People have experiences that, unless you are part of the minority, you will never know about without taking the time to find out. The guide, I think, takes away the fear of people who are different from you and humanizes them,” said Hinesley.

Both Smerbeck and Hinesley believe that this guide is a great asset for students and faculty on campus. As they continue to work on the second edition of the guide, the impact it can make on student lives is at the forefront of their minds.

“Students benefit from faculty and staff being knowledgeable about gender diversity by feeling they belong, by seeing that people sincerely care about them, and by being in a place that allows them to grow,” said Hinesley.