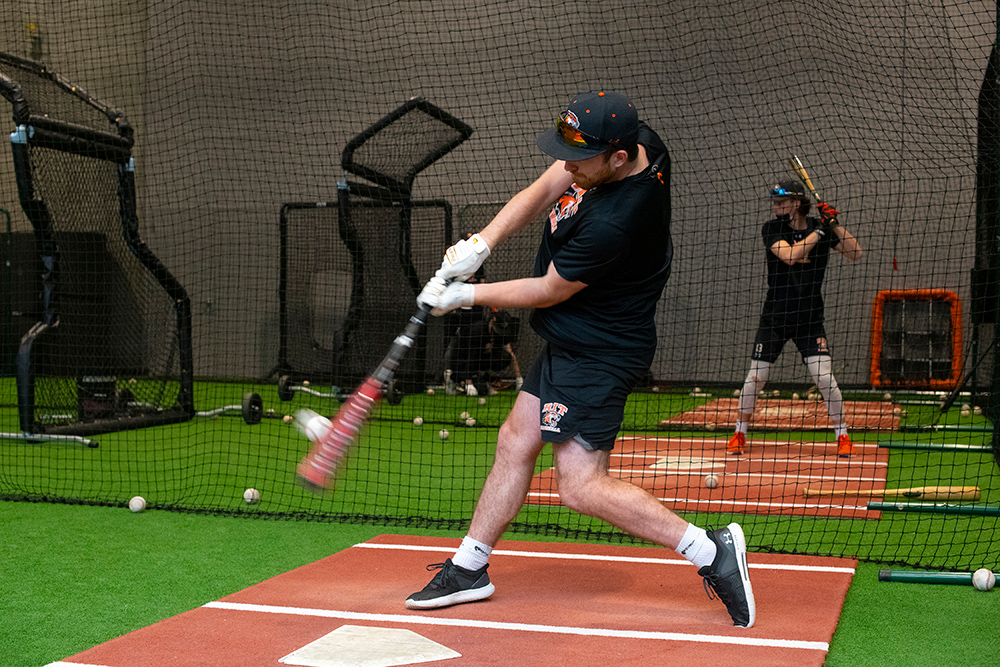 Charles Arnold has loved baseball all his life. The third-year physics major from Corona, Calif., has played since he was 5 years old, excelled in high school, and was hoping to play for the RIT Tigers, but an unfortunate joint injury cut short his dreams of playing at the college level.

“I enjoy studying the physics involved in tangible things and moving parts, and I also enjoyed baseball, so I always thought that there’s got to be a field where the two merge together,” Arnold said. Working on the new baseball biomechanics hitting lab has given him the opportunity to combine these two passions and has allowed him to contribute to the baseball team from a new angle.

The biomechanics lab has been created in partnership with the Wegmans School of Health and Nutrition within the College of Health Sciences and Technology and RIT Athletics. Bill Brewer, director of the exercise science program, said that CHST and Athletics are finding “the right kind of niche” with this new lab. 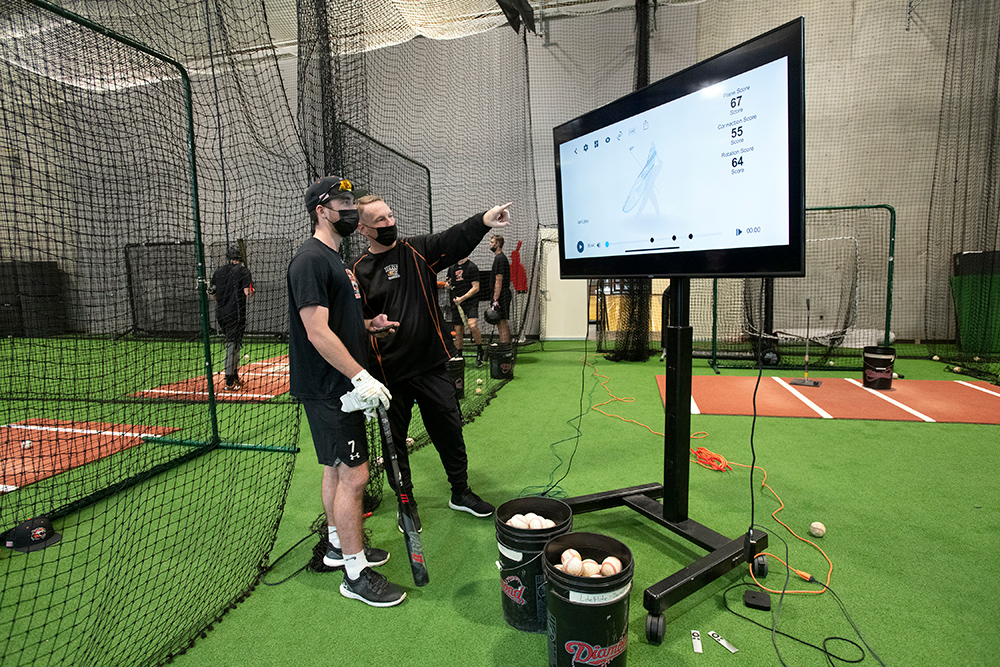 The lab is currently in the auxiliary gym of Clark Gymnasium. Students and faculty from the exercise science program use high-speed cameras, motion capture technology, and other sensors to analyze the motions of baseball players as they swing the bat, creating velocity with which to hit the ball. Using this information, they help the players tweak specific movements to boost their performance while also reducing their risk of injury.

Arnold enjoyed taking kinesiology and is currently taking biomechanics. These classes prepare students to analyze data from the lab. He has also used motion capture software to analyze baseball pitchers from junior colleges near his hometown, and he plans to use the biomechanics lab to study pitching for his upcoming capstone project.

RIT’s biomechanics lab is unusual in its focus on hitting instead of pitching. Rob Grow, head coach of RIT baseball, said that, “Most baseball biomechanics labs have focused on pitching since pitching involves a greater risk of injury, which biomechanical analysis can help prevent.” He said that because of this, pitching has gotten ahead of hitting. “We’re in a space where we can be a leader rather than a follower if we’re doing a hitting lab,” Grow said. “We could be one of the best labs in the country, and that’s something that could differentiate RIT.”

The lab’s focus on hitting is different than Arnold’s focus on pitching. But, he said, “The hitting lab definitely allows me to move forward and learn more about an absolutely crucial skill for baseball players.”

Brewer said that the inspiration for the lab began when Grow reached out to him about a partnership between baseball and exercise science.

Brewer also emphasized the importance of Jeff Albert’s influence on the creation of the lab. Albert is the hitting coach for the St. Louis Cardinals, and he played baseball at RIT for Grow in 1999 and 2000. He explained that he studies biomechanics and uses this technology to help his own players, and that he saw the potential to bring this to RIT. “One of the things I stayed in touch with Rob about is the opportunity to do something really unique here and bring all the different areas of the university together.”

“Meeting Jeff Albert last fall was crucial, because it really galvanized the possibilities that Rob and I had been discussing,” Brewer said.

Just like Albert, Brewer envisions the lab expanding to involve other disciplines, such as film and animation, imaging science, and industrial engineering, as well as other sports, like golf and tennis. Ultimately, he hopes to create a certification or degree program, which would focus on combining exercise science and technology.

Arnold’s aspirations for his future align with this. “My end goal is to be the head of a research lab or create a sports performance analysis company. Right now, I love being involved with the team in this unique way. It feels like I’m contributing to something bigger.”