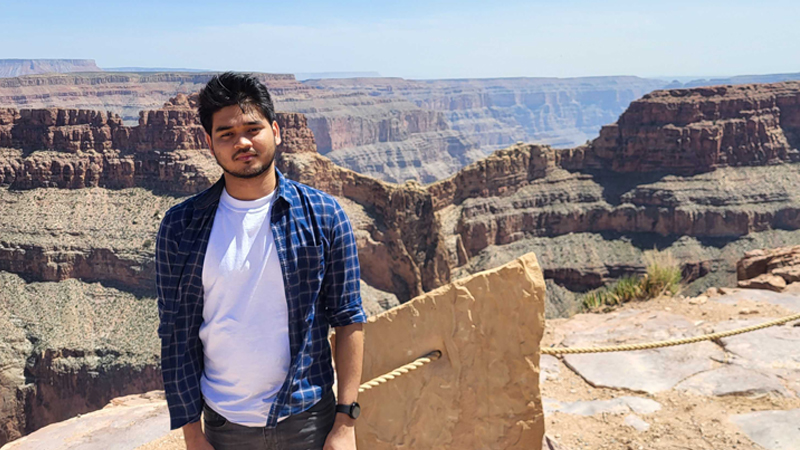 Vijay Soorya Shunmuga Sundaram ’21 knew he wanted to pursue a Ph.D., but he wasn’t sure which field suited his interests. As he considered his options, he started the RIT physics MS program, which ultimately helped him get to the next step. The physics MS program solidified his understanding of core areas of physics and allowed him the flexibility to pursue different fields of interest. Now Vijay is a second-year Ph.D. student in the Microsystems Engineering program at RIT, where he is using his knowledge of Integrated Photonics for Quantum Information and Communication.

During his undergraduate studies at Amrita Vishwa Vidyapeetham in India, Vijay heard about RIT from a professor who had obtained his doctorate there years ago. At the time, there wasn’t a physics program, but the Astrophysical Sciences and Technology, Imaging Science, and Microsystems programs at RIT were well respected.

“The wide variety of cutting-edge, niche work at RIT drew me to the university. After receiving my bachelor’s degree in aerospace engineering, I wanted to transition to more fundamental physics research for my higher studies but didn’t have a specific field in mind. I figured I could use RIT’s inaugural Physics MS program as a stepping stone towards sampling different areas and then move into one of the more established Ph.D. programs.”

To help him find his niche, Vijay picked an elective from a different program each semester ranging from astrophysics to optics and even data science. He discovered he was extremely interested in working with light and found a quantum optics research project at the intersection of physics and engineering.

“After completing my MS, I joined the same group under the same advisor for my Ph.D. I learned just how transferable the skills you learn in college are and that it’s important not to shoehorn yourself into a specific area too soon based on the name of your degree or department.”

When Vijay initially approached the RIT Integrated Photonics group, they didn’t have any open spots for new students, but Dr. Preble contacted him as soon as they could obtain a grant to fund him. “Being in that group formed the trajectory of how I got to where I am right now,” said Vijay.

Vijay said he is thankful for Dr. George Thurston, program director of MS Physics, and Dr. Greg Howland and Dr. Stefan Preble, who co-mentored him for his master’s thesis. “Dr. Thurston identified that I might struggle with a graduate-level Quantum Theory course due to my engineering background and suggested I try an undergraduate-level introductory course first. That course, taught by Dr. Howland, sparked my interest in quantum physics and led me to pursue research opportunities in quantum optics.”

“I also owe a lot to the physics department faculty. They were very supportive and always willing to make time to talk to me about research, even when I was completely clueless and had no idea what direction I wanted to go in.”

While RIT is well known for co-ops, Vijay hasn't taken advantage of that opportunity yet. He's been busy conducting research on campus over the summers. Vijay learned from industry people during job fairs and conferences that it's clear that experience in an experimental research lab makes him a lucrative applicant in a variety of sectors. Especially industries that need employees with niche skills, such as the photonics and semiconductors field or new ones like the quantum computing industry.

Vijay added that employers, especially start-ups, highly regard skills that appear routine to any lab graduate student because most don't have the time or expertise to train someone new. This includes everyday tasks such as laser safety, cleanroom practices, and a basic understanding of the underlying principles behind instruments.

“Personally, I feel very secure about my job prospects in my field and adjacent industries based on everything I’m learning from conducting research at RIT.”

Vijay has advice for students interested in physics, “With all the buzz around quantum computers, this is a perfect time to get into photonics. The field is easily approachable from several areas – physics, optics, and even electrical or computer engineering. Photonics, or semiconductors in general, make up all our phones and laptops, and newer applications are always coming up. Even if something like quantum computing is not your forte, there will always be a good opportunity in an application of your liking.”

As Vijay continued his academic experience at RIT, he shared his story of how this was the first time outside his country, yet he never felt too lonely or homesick. “RIT has a very diverse group of students. There are so many of us going through the same thing from so many places, and it was easy to develop a sense of community and not feel like an outsider.”

In addition to the variety of cutting-edge work conducted at RIT, Vijay chose the university for the location and the RIT Observatory. “Upstate NY is scenic, and I love the winters here. Rochester is a refreshing change for someone from a bustling and perpetually hot city in the southern part of India, and I’m yet to get tired of the snow. Stargazing has always been one of my hobbies, but I’ve never been able to explore it much without the right location and equipment. So, I was excited about RIT having its observatory.” 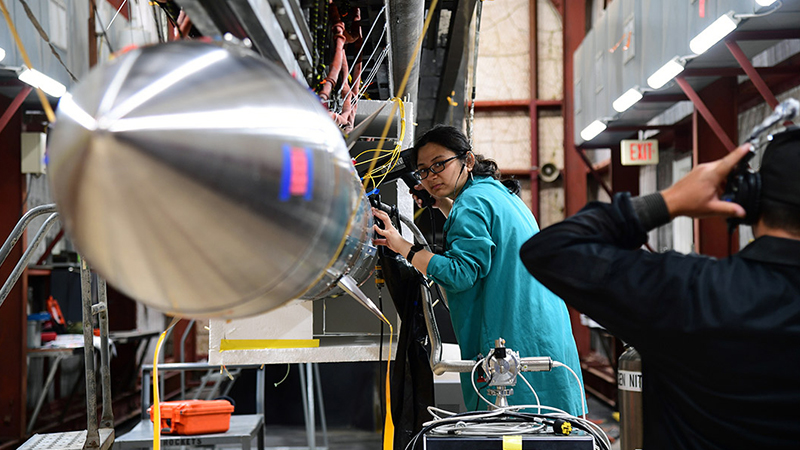 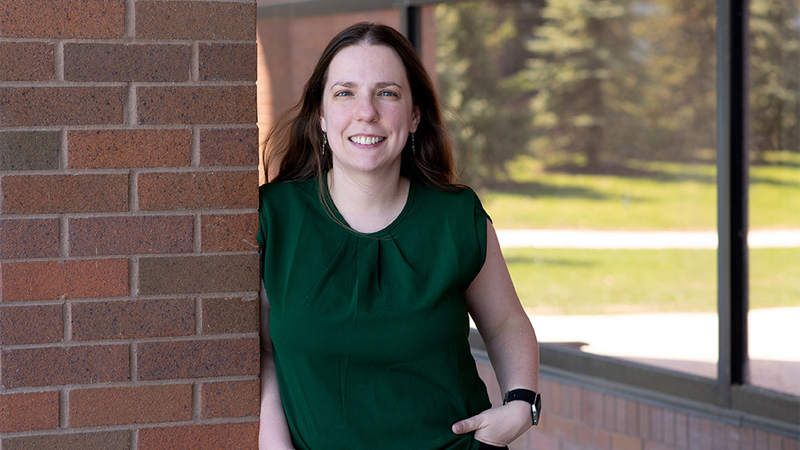 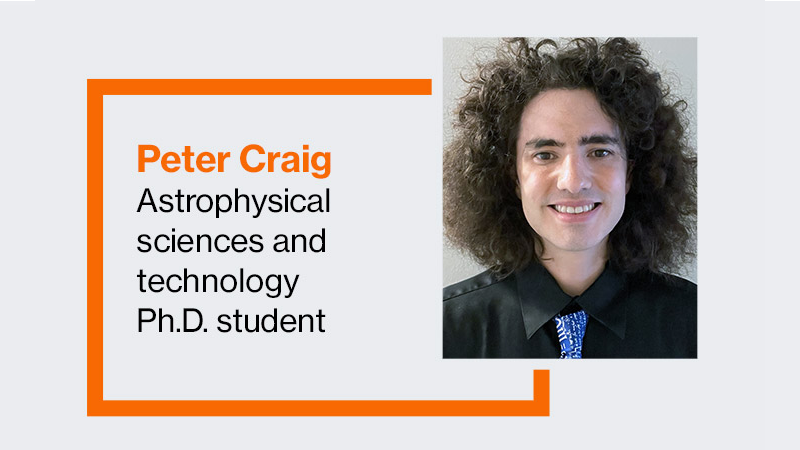 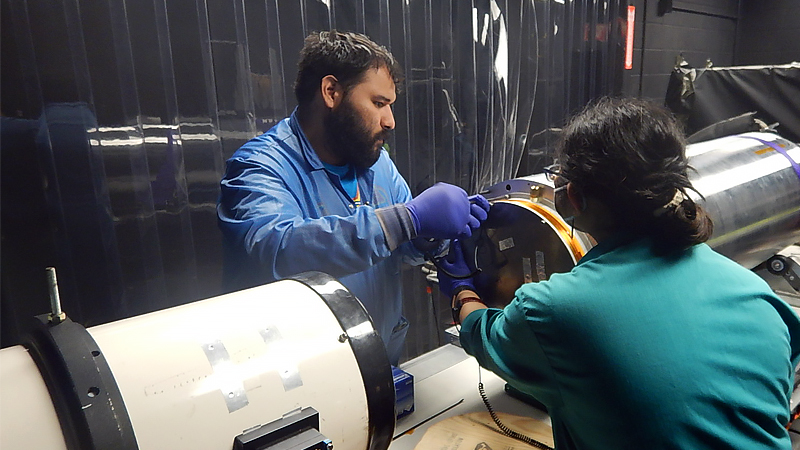 From RIT to Communicating with Satellites as a Spacecraft Operator