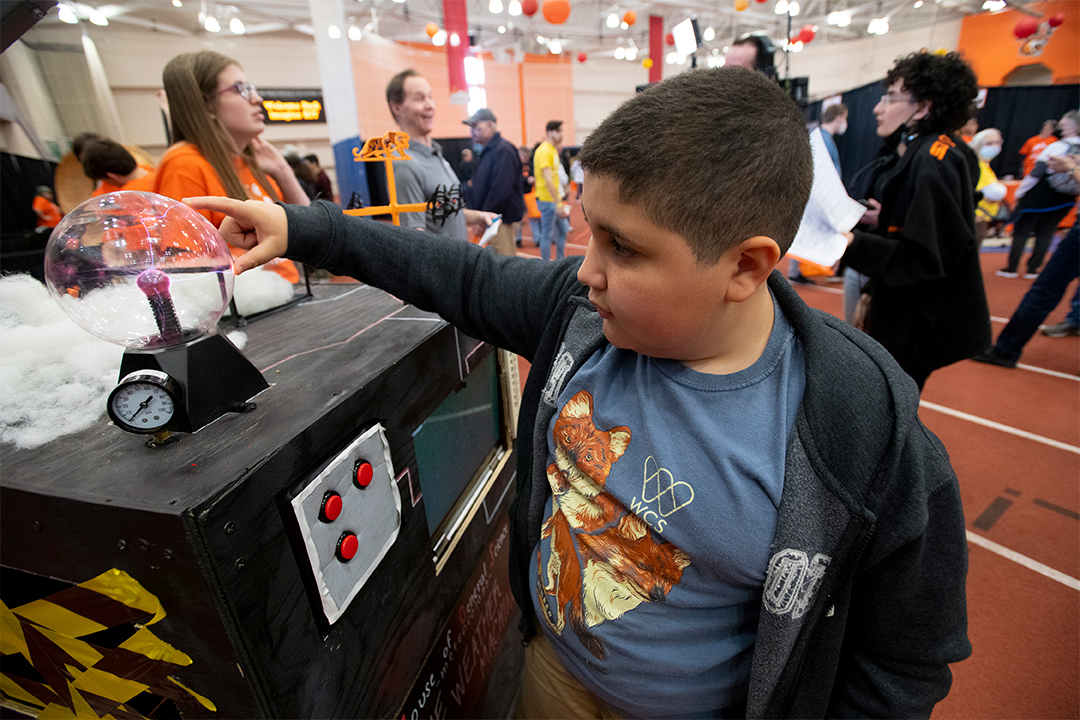 Max Rojas, 9, of New York City checks out the Weather Machine. “I like it here,” he said about possibly attending college someday at RIT.

After going virtual for 2021, thousands of people came to the Rochester Institute of Technology campus on Saturday for an in-person Imagine RIT: Creativity and Innovation Festival, which featured more than 250 exhibits throughout the campus from more than 1,800 students and faculty.

Topics varied from robotics, cybersecurity, the arts, biomedicine, performing arts, education of the deaf, and more, with exhibits ranging from a sustainable portable latrine, the RIT Beekeeping Club, interaction with a coral reef, and a virtual planetarium.

A one-hour show was live-streamed from the field house, hosted by television personality Scott Hetsko, a meteorologist on 13WHAM News, and radio personality Kimmy Coffey from WCMF’s “The Break Room.”

“It’s been way too long,” said RIT President David Munson upon seeing exuberant visitors, carrying their complementary orange tote bags flocking to campus for the festival for the first time since 2019. “This is the showcase event for the university. It just gets better every year.”

One ambitious festival goer, Shirley Murphy, of Lima, N.Y., was determined to see every single exhibit.

#RIT alumna Shirley Murphy, forever 29, from Lima, NY, is trying to visit every exhibit at #ImagineRIT. There are 250 exhibits, and that means Shirley has a lot of walking to do!

Many visitors started their day in the Gordon Field House.

Every year at #ImagineRIT the Gordon Field House is filled with some of the coolest exhibits the campus has to offer. Truly a must-see pic.twitter.com/kWccaKZH8Z

A one-hour show was also live-streamed from the field house, hosted by television personality Scott Hetsko, a meteorologist on 13WHAM News, and radio personality Kimmy Coffey from WCMF’s “The Break Room.” They interviewed many students with their exhibits, as well as Munson and Imagine RIT Director Ann Miller.

Join us today ⁦@Imagine_RIT⁩ Creativity and Innovation at its finest

Visitors came from hours away to explore the unique exhibits Imagine had to offer:

Ryan Turoff, 16, drove to Rochester from his home across the state near Poughkeepsie with his mother and grandmother to see whether RIT might be a school he would apply to. He’s thinking of majoring in engineering, or physics perhaps, and had checked off exhibits he wanted to make sure he saw.

“We wanted to come to show him the different fields to choose from in the various majors,” said his mother, Jennifer Thompson Turoff.

But he wasted no time trying out the Human Hamster Wheel, touring the Theme Park Enthusiasts and checking out the epee, foil, and saber demonstrations by the RIT Fencing Club in the Gordon Field House.

Another popular spot was the ESL Global Cybersecurity Institute, where the latest in computer defense technology is taught.

Cybersecurity at RIT takes a holistic approach to the impact of cyber crime in its hot command center. #ImagineRIT pic.twitter.com/E9yxkwz11s

The RIT Steelband Ensemble, playing “Imagine” in front of the College of Liberal Arts, was one of nearly 20 performing arts groups that performed during the festival.

Their #1 fan grooves to a rousing performance of John Lennon’s “Imagine” #ImagineRIT pic.twitter.com/6RfrtD93G9

And the RIT Pep Band played “Freebird” before an enthusiastic crowd in Global Village.

The creativity and inspiration of three exhibiting student groups were rewarded with $5,000 in the TAD Competition, showcasing exhibits in the intersection of technology, the arts, and design.

Those subjects were also infused throughout other exhibits across campus, many showcasing their unique flair for fusing art and design.

In the Fireside Lounge, a team from RIT’s National Technical Institute for the Deaf displayed their PopSign app designed to help hearing parents of deaf or hard-of-hearing children learn sign language. The project, a collaboration between RIT’s Center on Access Technology and Georgia Tech, is designing the next generation of the game.

In Booth Hall, new media design students featured CreatureLab. Visitors drew a single body part and the students turned the images into monsters after merging them with other visitor designs.

Meet #RIT new media design major & graduating senior Henry Grant, from NYC. He's a designer on the Creature Lab team at #ImagineRIT. Look over Henry's shoulder to see the monster mash-up that exhibit visitors made. Henry is headed to Boston to pursue a career in New media design. pic.twitter.com/HLI6KMBa8I

“I don’t think there’s another college in the country that puts on this kind of festival,” Munson said. “There’s something for everyone to see.”

The festival’s premier sponsor this year was Rochester Regional Health. 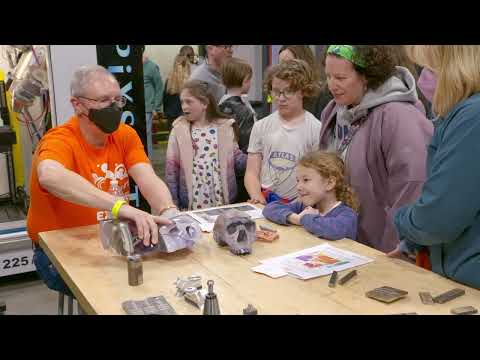