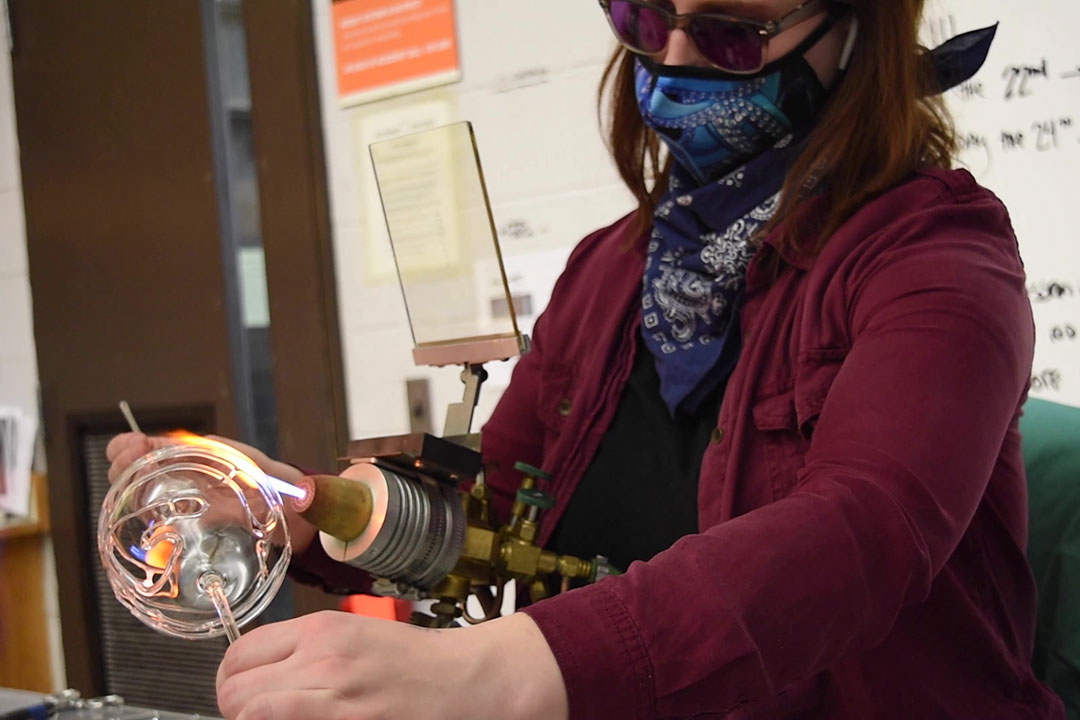 “A Glimpse Into the Glass Studios” was one of the most popular videos at this year’s Imagine RIT: Creativity and Innovation Festival.

If you couldn’t tune in to this year’s Imagine RIT: Creativity and Innovation Festival which was held virtually on Saturday, not to worry. The more than 250 exhibits of projects, research, and performing arts of more than 800 students, faculty, and staff at Rochester Institute of Technology will remain online for the foreseeable future and are free to access for anyone with an Internet connection.

“This year’s festival was a success,” said Ann Miller, director of Imagine RIT and Special Events, who noted that many other annual festivals have had to cancel last year and again this spring. “Our goal was to take Imagine RIT virtually, and we did that with tremendous success. We learned that a virtual festival will never replace allowing guests to come on campus to see the exhibits first-hand, but we’re optimistic as we look forward to 2022.”

Next year’s Imagine RIT festival is scheduled for April 23, 2022.

Most of the videos are just a few minutes long and all are captioned.

Thousands of visitors tuned in on May 1 to see the exhibits, and many more viewed videos each day since their debuts. Most of those viewers came from the northeast U.S. and California, but the videos were also popular in foreign countries, especially in Croatia, United Arab Emirates, China, and Kosovo, where RIT has international campuses.

Among the most popular videos were the Velocity: RIT’s Urban Dance Crew Performance Video; A Glimpse into the Glass Studios; Mind Control; ConcRIT 2.0: 3D Concrete Printer; and Beyond Mars: New Technology to Explore the Cosmos.

“When I went to the website on Saturday, I was looking forward to experiencing a taste of the future,” he wrote in a thank you to the students, faculty, and staff involved. “As I navigated the site, I found 263 virtual exhibits at my fingertips and I quickly became immersed in all the amazing content and projects. I was impressed and inspired by all the hard work put in by our enterprising students, faculty, and staff. Thank you for creating this experience!”

Munson said the festival continues to inspire “the next generation of problem solvers by connecting young people to the wonders of science, technology, engineering, math, design, business, health sciences, the liberal arts, and the arts. We accomplished that and so much more. For those who attended the festival online, you experienced the unexpected, the extraordinary, and a glimpse into the future. I know for certain that some of the exhibits I visited will blossom into products, services, and startup companies that will make the world a better place.”

He also thanked the festival’s sponsors this year, including premier sponsor Rochester Regional Health, for their commitment to making a virtual event a success.