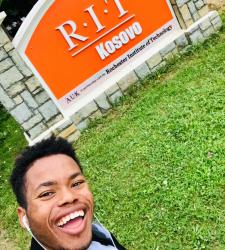 Identity - it’s what defines us, grounds us, and ultimately who we are. We each have a multitude of identities ranging from race, gender, sexuality, religion, etc. While each of these identities play a significant role in who we are, I believe that race/ethnicity is the most apparent of them all. Unlike many of the other identities, you can’t escape the skin you live within. When encountering strangers in public, the first thing they see is my blackness. From the melanin in my skin to the afro-textured hair on my head, I am Black before any of my other identities, and I am very proud to be Black. Unfortunately, being Black in America “ain’t no crystal stair.” In fact, in many cases, my blackness is often seen as a threat. How this negative connotation about Black people in America came about extends well beyond my existence but nonetheless, it is something myself and many other Black people face daily. I mention this not to evoke sympathy for Black people in America or disdain towards America for its discriminatory nature, but as a means of getting a glimpse of how me being Black in America is versus my experience being Black abroad.

Being Black abroad - specifically in Kosovo, where I studied - was an experience like none other for myself and the few Black American friends that I made. For context, Kosovo is a small country in Southeastern Europe and is primarily populated by Albanians and Serbians. While there are a few fair and medium skin toned individuals in this region of the world, there are almost no Black people. With that being said, it was clear from the moment that I landed in Kosovo that I stood out.

When you are often faced with prejudice in your home country because of the color of your skin, you tend to become uncomfortable standing out, especially in unfamiliar places. The fear of being judged can be very overwhelming because it often causes individuals to closely monitor their every action in hopes of not perpetuating stereotypes. While there are negative and positive stereotypes, at the end of the day, all stereotypes provoke self-consciousness and sometimes anxiety. These social pressures can cause individuals to attempt to stray away from their own identities to avoid unwanted attention. However, attention in the purest forms can sometimes be reassuring.

While navigating Kosovo, my friends and I often received many stares, honks, people even often stopped us in public to ask for pictures with us and genuine conversations. At first, the stares made us uneasy and at times we were afraid to let our guards down out of fear that we were being negatively targeted because of our skin color. However, as we went out in public and engaged with the community, we began to realize that the attention we received was not ill-intended. In fact, many of the locals were pleased to have us in Kosovo and were genuinely curious as to how we decided to visit there. The level of respect and hospitality was unparalleled compared to most experiences we’ve had with strangers in America, where most of us were born and raised. So, the million-dollar question is, how is it that being Black abroad made us feel more comfortable in our racial identity amongst strangers than we do in our home country? All in all, from this experience, I was more empowered to embrace my racial identity and welcome others’ curiosity so long as it is not ill-mannered.

Darryl Miller is a Psychology major in the College of Liberal Arts and studied on the RIT Kosovo Peace & Conflict Summer Program in summer 2019.