Being LGBTQ+ While Studying in a Religious Country

Being LGBTQ+ While Studying in a Religious Country 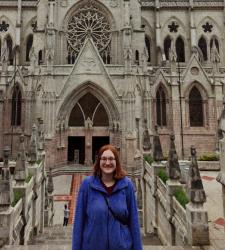 I have been an out and proud lesbian since I was a sophomore in high school. I was in my schools’ gay-straight alliance. It hasn’t always been easy, but I was lucky enough to live in a relatively accepting community and a very accepting family. I am not ignorant of how much privilege I have had growing up in my community and feeling accepted.

I have always known that I wanted to study abroad. I chose International and Global Studies as my major because I knew it would lead me to travel and learn more about the world and how it works. Learning about the world and how it works however, isn’t always a picnic. There are some very scary things to learn. For example, in approximately 71 countries it is still illegal to be gay and in some of those countries the punishment, if one is found to be homosexual, is death. Even in countries where being gay is legal, LGBTQ+ people may face persecution, discrimination, or violence. Knowing this, I knew I had to be smart and thoughtful about the countries I chose to visit and study in.

I chose Ecuador because, despite being a very heavily Catholic nation, it one of the most accepting countries in South America. Ecuador has housing protections for sexual orientation and gender identity, same-sex civil unions, discrimination protections. Conversion therapy, which is legal in many states here in the United States, is banned there. LGBTQ people can join the military and give blood. Still, knowing how many religious people feel about LGBTQ people, I was nervous. I didn’t want to have to go back in the closet for five months.

As a gay person, I am always weary of telling new people that I am gay because it is a safety concern. One of the first things my host family asked me when I got to Ecuador was if I had a boyfriend back home. They were just making playful conversation, but situations like this can make LGBTQ people uncomfortable or even scared. I told them, no that I did not have a boyfriend, but I did not elaborate.

Weeks later, when I felt more comfortable, I causally mentioned my relationship with my ex-girlfriend while I was out in town with my host father. We had just come from a Sunday service at his church. It was nerve racking knowing that he was a traditional and devout man, but I felt comfortable enough to share my truth. He didn’t even think twice about it. It was totally normal to him and to many people in Ecuador. Especially, in a capital city like Quito.

There were times that I felt more accepted and appreciated for who I was in Quito than even back home. I’m not saying that it was some gay paradise, but I knew I had nothing to fear when I was there.

I know that one of the biggest concerns for LGBTQ students thinking about studying abroad is their safety and comfort in the identity abroad. At least it was for me. When I was in Ecuador, I learned not to judge a country by its religion and that if you are willing to take risks, it can be extremely rewarding. I cherish my semester in Ecuador and can’t wait to return someday.

Some resources for LGBTQ+ students interested in studying abroad:

Rose Lukasiewicz is a International & Global Studies major in the College of Liberal Arts and studied abroad twice - first in Paris, Madrid and Rome in summer 2018, then at the Universidad Internacional del Ecuador in Ecuador in spring 2020.