Embracing My Identities in the UAE

Embracing My Identities in the UAE 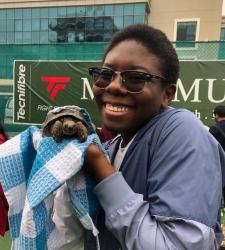 I have many different identities that I embrace and traveling to the United Arab Emirates (UAE) made me the most comfortable with almost all of them. I consider myself to be a Black, deaf woman and during my time in the UAE, I could be unapologetically me (for the most part). Although I was fortunate enough to study abroad twice during my time at RIT, I am able to reflect more about my experience in Dubai.

As far as laws go, under the topic of technical “freedoms” and liberties, I didn't do anything in the UAE that I would not do in America. I did learn more about sharia, or Islamic law, while I was there. Honestly, once learning a little bit about Islam and the laws that are put it in place, I understood it. I plan to learn more and expand on my research. I wrote a paper on sharia and compared it to the United States’ justice system. While doing the little research I did, I learned that there are stark differences but also a lot of similarities.

Before going to the UAE, I had many family members, outside of my immediate family circle, express their skepticism to me, as a young woman. They had concerns about my expressive freedom and my clothing choices. They thought I had to cover up from head to toe. Stories were told to my parents about how women aren't respected. They were concerned for my overall safety because of things they had heard. I didn’t let their comments faze me too much. In the end, I was conscious about what I packed and what I wore, as a way to be respectful of Islamic culture. Once I arrived, I learned that my clothing depended on the Emirate I was in, and/or the specific location. The only time I had to wear a head covering was when we entered a masjid, or a place of worship. In general, I wore many dresses or modest flowing outfits that would actually help me keep cool. It truly wasn't as restrictive as some people believe.

I found it surprising that some family members thought that my “freedoms” in the UAE were less than the ones I have in America. To some extent, as an American, I didn't have the same luxuries because I was a guest in the country. But at the same time, I felt a lot safer roaming the streets of Dubai, than I have ever felt in America at any given time. Firstly, as a woman, I felt empowered in the UAE. I felt respected and cherished. I could walk around at 2 am, all alone, and be just fine. I wouldn't dare do that outside of campus, in New York City, or even my hometown. I took the subway all around Dubai on my own, and I was confident in where I was going. At home, I barely like taking the train to NYC from Connecticut and it is only a 45-minute train ride.

As a Black person, I didn't feel like a minority. I didn't feel targeted, based on the color of my skin. Historically speaking, the Middle East, North Africa (MENA) region is where my roots most likely lie. I met Saudi Arabian sisters who had the same complexion as me, so who knows? One of them also had glasses and short hair so we were often mixed up. At RIT Dubai in general, I felt like I made a deeper connection to the students of all backgrounds because we looked alike, or at least we weren't marginalized at our own university, let alone within the country. Being at a predominantly White institution as an ALANA student is draining, but while in Dubai, I felt alive and energetic.

However, as a Deaf individual, there were some limitations. Yet, many people were accommodating and understanding of my specific needs. I was able to strengthen deaf awareness at RIT Dubai. I even met a classmate who was Deaf himself. I learned about Emirati Sign Language and met several individuals in the Deaf community who knew ASL themselves. While the UAE has a lot more to learn about accessibility, I was still able to effectively communicate and be comfortable. As I write this blog, I am even thinking about the metro/subway and how easy it was to know where you were. Not only was the PA system loud and clear, but there were many visual indicators at the station and in the train car itself. I think that also made it easier for me to navigate around the city.

All in all, my experience in Dubai was one of the best times of my life. I truly have found my second home and family while being there. When I came back home, I realized there are parts of my American life that I love. However, I value my safety a lot. With my identities, there are too many instances where it can be extremely uncomfortable and unsafe. If you have ever felt out of place from “societal norms”, or any other reason, please know that there may be a better place for you to flourish. You just have to jump at the opportunity, when you can!

Trinity is a 4th-year Criminal Justice major in the College of Liberal Arts and studied abroad twice. In summer 2019 she participated in an RIT faculty-led program to Russia and then spent a semester at RIT Dubai in fall 2019.

Want to learn more about Trinity's experience in Dubai? Check out the video Living & Studying in Dubai with RIT Global Ambassadors on YouTube.