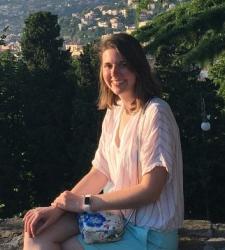 The summer after my first year at RIT, I studied abroad in Zagreb, Croatia. It has been one of my favorite college experiences so far. I made so many memories that I will cherish forever and friends that will last a lifetime. During my planning for the trip, I came across different phone plans that I could choose. My sister had gone abroad previously, and she decided to get a SIM card when she landed. She had cellular service that she could use to communicate with her friends and for social media. I decided to do something a little different. Instead, I chose a plan that would charge me for a full day when I wanted to use cell service and data, but I could decide which days I wanted to use it. For the most part, I didn’t use my cellular data very much – instead, I relied on Wi-Fi - and I think it made my experience that much better.

Communication was a little different for me compared to those who got a SIM card. I would use WhatsApp to call and text when on Wi-Fi. WhatsApp quickly became everyone's main form of communication within our group. We used it often to make plans to meet up for dinner or to explore the city. Everyone had access to Wi-Fi in their apartments, so it was easy to get in touch with each other. We also found that many bus/train stations and cafes also had Wi-Fi, so it was always easy to connect. My travel buddy also had a similar plan, and we were able to coordinate which of us would use our cellular data for the day. Once we had it on, we could use it as much as we liked without worrying about the limit. We did this during the beginning of our program when we were traveling quite a bit. But once we were acclimated to the city, we hardly ever used it.

I found that I became better at navigating the city. Even without cellular data, we found we could still use the GPS on our phones - we were still able to track where we were and many of the major landmarks marked on maps. My favorite app that I used while traveling was Google Maps. It would save my previous searches, so I would plan ahead and look up places that interested us so that we could find them on the map later. I also found that I became really good at finding places on the map by using local landmarks. When we stopped at cafes, we could use the Wi-Fi and look up our next route or order an Uber. Google Maps would keep the route after we left the café despite being out of range of Wi-Fi. My favorite mode of transportation became walking since there are so many wonderful sights to see. It really strengthened my navigational skills since I could find a place on the map and figure out how to get there.

For our longer trips outside of Zagreb, we would take busses, and sometimes we would even have Wi-Fi on the busses, which was always a great treat. But I often found myself watching the landscape more without the distraction of my phone. I loved seeing all of the cities and buildings that we passed and the gorgeous countryside. Overall, I think disconnecting from my phone allowed me to become more engaged in my experience abroad. I didn’t have the distractions of social media, which allowed me to live in the moment.

Traveling “off the grid” without relying on my phone also made way for some incredible experiences. Since Google Maps show landmarks of the city we were in, we would check them out if we had time. We did this on a weekend trip to Italy and found a garden that was a bit outside of the major tourist attractions. It was stunning, and it felt like we had it all to ourselves. We even ran into two of our friends on the trip that were visiting Italy for the long weekend - it wasn’t even planned! We also were able to find a castle in Italy that was higher up in the hills. We didn’t know we would have to hike up so many stairs since the map didn’t give the elevation, but it gave us a fantastic view of the city.

I don’t think I would have had the same experiences if I chose to have full cell phone coverage. Going cellular silent allowed me to be more spontaneous and engaged in my surroundings and has given me stories that are unexpected and that I’ll remember forever.

Gabi Wolf is a Computational Mathematics major in the College of Science and studied abroad on the Summer Psychology in Croatia program in summer 2018.