Home and Back Again: Retracing My Family's Heritage

Home and Back Again: Retracing My Family's Heritage 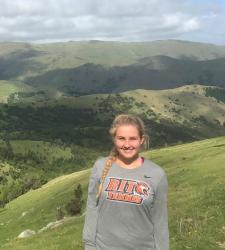 When I made the decision to study abroad, it was a no-brainer where I wanted to go: New Zealand. Of course, my decision was heavily influenced by the picturesque nature of the country, including snow-capped mountains, endless opportunities for hiking (“tramping” to the locals), sprawling green pastures dotted with sheep and cows, and stunning natural beaches. However, the other major reason why I wanted to spend a semester abroad in New Zealand was because that is where my mother was born and raised.

My grandfather grew up in England, and my grandmother in America. In 1961 they met in England and fell deeply in love. My grandfather decided to move to New Zealand in 1962, and my grandmother was able to join him two years later. By 1965 they were married and starting their life together in a completely foreign country rich in culture and natural beauty. My grandfather worked on a farm to support his family and eventually began studying at a teacher’s college. There, he developed a passion for speech pathology and communication disorders. Before he knew it, he became a professor at the University of Canterbury and owned a private practice in Christchurch, New Zealand where he lived with his wife and children.

Growing up, I had heard so many stories from my mother about her childhood in New Zealand. She told me all about biking to and from school with her cello strapped to her back, learning the Maori haka (ceremonial dance), picking exotic fruits from bushes and trees in her own back yard, spending holidays near the beach in “baches,” the kiwi word for small houses rented for vacations, and enjoying all sorts of classic New Zealand baked goods and dishes that are nowhere to be found in the United States. I always loved learning about her time in New Zealand and hoped that someday I could see the country that shaped my mother into the beautiful and inspiring woman she is today.

When my mother was 16, her family decided to move to America. It was a hard decision to leave their utopic country behind, but there were certain opportunities in America that were too good to pass up. Moving from a vast, peaceful, and relaxing country like New Zealand to the busiest place on earth was definitely a shock for their entire family. However, my mother was able to adapt to her new home and pursued a career in audiology, inspired by her father’s dedication to helping those suffering from communication disorders. She met my father in Rochester, New York, and the rest is history.

It was hard for me to imagine the courage it takes to leave all you know behind and move to a foreign country, like my grandparents moving to New Zealand and my mother moving to America. This type of journey has obviously played an important role in the lives of many of my family members, and I felt an undeniable call to travel in their footsteps.

In February of 2018, I left for my semester abroad at the University of Canterbury in Christchurch, New Zealand. I thought I knew what to expect, after hearing all about my mother’s home city and the university where my grandfather taught, but I was absolutely blown away at the wonderful differences presented before me. I was able to see first-hand the streets along which my mother had biked thousands of times, the house where my grandparents had raised their four children and three cats, the place my grandfather taught lectures and shaped students’ lives, my mother’s favorite beaches, and finally, taste all the delicious food that I had heard so much about. Additionally, I was able to meet some of my mother’s childhood friends and hear even more stories from them about my mother growing up. There were many times that I missed my family and friends back home, but I truly learned how to be independent and navigate through a foreign place on my own.

I changed so much during this experience and discovered things about myself that I never would have known if I had not taken the risk of studying abroad.

Going through the journey of leaving everything behind and stepping into the unknown helped me understand the trials my family members had gone through. Finally, I was able to understand the indescribable country of New Zealand, and realize how this incredible country has shaped my family, including myself. New Zealand will always hold a special place in my heart and feel like home.

Diana Kulawiec is a Biomedical Engineering major in the College of Engineering and studied abroad at the University of Canterburry in New Zealand in spring 2018.