Oh no! My passport!

Oh no! My passport! 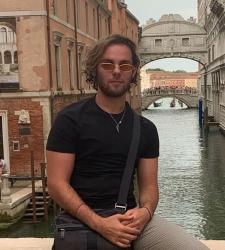 One of the many perks of studying abroad is international travel. Depending on where you go, traveling from country to country can be as easy as a $12 bus ride. While studying abroad in Croatia, I decided to make the most out of my time there and took a trip one peninsula over to Italy. A couple of other students and I bought overnight bus tickets for Venice. The route was relatively simple: we would take one bus from Zagreb to Ljubljana, and then a second bus through the rest of Slovenia straight to Venice. I couldn’t have been more excited.

The time arrived and I had all my stuff packed and ready to set out for Venice. It was a short trip into Slovenia, they checked our passports, and sent us on our way. Now through all my excitement, I must have forgotten we were getting onto a second bus because I had the genius idea to pop a melatonin and put my passport under my thigh. Hindsight is 20/20 I suppose because when we got to the second bus I was just waking up and rushed off to the next bus. I was too sleepy and didn’t double-check that I had all my stuff. I thought I had everything … mostly. It wasn’t until we were on our second bus, and we were almost at the border to Italy that I realized I was missing something very important… my passport!

My heart sank all the way down to my knees and I was veering into panic mode. What was I going to do? Was I stuck in Slovenia? Was I stuck in a completely different continent? The U.S. consulate in Slovenia was back in Ljubljana, which we were now over 100 miles from. It was 3:00 a.m. and I had no idea who to call or what to do. I took a deep breath and remembered the pre-departure orientation the RIT Study Abroad office hosted before our journeys abroad. I remember they said if an emergency happened, we could call RIT’s public safety’s 24/hr. line and they would direct us from there. I called public safety and they answered and got me in touch with Jenny Sullivan, the Director of RIT Education Abroad, who guided me through what to do and made the situationless overwhelming. It was 10:00 p.m. in the U.S. and she stayed on the phone with me to make sure everything was okay, contacted my parents, got me in touch with people at RIT’s Zagreb campus, and directed me with the next steps to take.

After following the bus’s location in a maps app on my phone I saw that we were leaving Slovenia soon and my anxiety started to rise again. I had photos of my birth certificate, my passport, my license, and I had sweat dripping down my head. I was hoping if I begged and pleaded with the officials at the border they would let me into Italy. The next time I checked the maps app I noticed we were in Trisente, Italy. I was so shocked and surprised that I made it to Italy and the trip wasn’t completely ruined. I thought my prayers were answered, or it was sheer luck, but I later found out about an EU agreement that allows you to travel from country to country as if it were state to state in the U.S. Once we were in Italy a representative from the Zagreb campus told me I would have to go to the U.S. Consulate in Milan or Rome to get a temporary passport because there are only four locations in all of Italy where you can do that. It added stress and I was upset about losing my passport, but at the same time, I figured that there are worse places than Italy to be trapped in without a passport.

Hunter Mascia is a Film and Animation major who studied in Zagreb, Croatia in summer 2019.