Studying Abroad as a Deaf Student

Studying Abroad as a Deaf Student 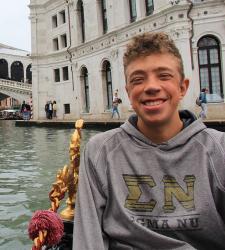 Studying Abroad in Zagreb, Croatia was an extraordinary experience with my two Deaf best friends. You might wonder how we studied abroad in a country with a different language, both written and signed. We went to RIT Croatia, an English-spoken university at the Zagreb campus. RIT provided interpreters for the entire semester program. Croatian Professors spoke in English to my Croatian classmates. The difference-maker for us, Deaf Americans and ASL interpreters, was the teacher would sometimes abruptly stop the lecture because he forgot how to say a specific word in English. He will ask the Croatian classmates how to say that particular word and then switch back to English. Overall, it was an excellent experience, and we communicated with our classmates through interpreters, gestures, and texting.

Our daily life in Zagreb was fantastic while, at times, challenging. In Zagreb, the number of Croatians who know English is relatively small, especially for older people as they only speak Croatian. On the first day when we moved to the apartment and unpacked, we went to the grocery store to stock up on food. While we were shopping, we wanted to order some meat for dinner, and so we had to gesture with the butcher who did not know any English. We couldn’t use the Notes app on our phone as they knew no English; we couldn’t hear the words and understand what they were saying. We kept on gesturing, and with persistence, we eventually got the meat we wanted. It was the first experience with the Croatian language barrier, and it was frustrating, to say at the least. I told myself that this was to be expected - we are in Croatia, and we can’t expect our experience to be a breeze. So we kept our chins up and kept on putting in the effort. There was another instance where we were at a grocery store looking for a specific spice for our pasta. We typed the spice in the notes app and showed it to an employee; she immediately shook her head, walked away, got another employee, and tried to talk to us (in Croatian). At that point, my stress and frustration went through the roof. I was beginning to lose my patience as at home in Canada/USA, the employees are generally patient. They will immediately help if I have a question, but this was not the case in Croatia. We tried to gesture, used Google Translate, and tried to communicate with them the best we could, but sometimes people would not help or try to communicate with us! As I mentioned above, we kept our chins up, stayed assertive, and eventually got the employee to help us.

During the semester, we traveled outside of Zagreb, either by plane or bus. We always kept ourselves engaged and had the notes app ready in case. We kept our eyes open to make sure we didn’t miss any important announcements or information being shared verbally. As mentioned in my other blog, “Everyday Adventures in Zagreb, Croatia”, we had lunch with the sweetest older man when we were on top of the mountain in Zagreb. This man knew absolutely no English, but we still had a blast with him. During the few hours we chatted with him, it was a wild experience. He knew no English, which made it difficult for us to communicate via texts or the professional interpreters we had with us. We just did our best and gestured with him, pointed at the menu to see what he wanted. He pointed at a painting of a person in the restaurant and then pointed at himself - we realized that the man in the picture was him. He then brought out his phone and showed us a YouTube video of him back-skiing, which was a world record at that time! The man was very sweet because he had a smile that filled the room with light. His personality was so upbeat and kept us laughing even though we didn’t understand each other fully. It was a great lunch and something I’ll remember for a long time.

One of my favorite stories related to Deaf culture in Europe was when we took a 6-hour bus to Budapest. After unpacking, we immediately went to the City Center. When we arrived, we saw many Deaf people signing with each other. You don’t see many Deaf people in one area unless there's an event, so we were surprised. We approached a woman who was from Italy and knew International Sign. We asked why there were so many Deaf people there. She said it was for the World Federation of the Deaf (WFD) conference, and they just had the closing ceremony. The woman introduced us to her parents, who only knew Italian Sign Language, however we still gestured and communicated with them pretty well.

While we were chatting, a tall man named Mateusz approached us and asked in International Sign if we were Deaf, and we said yes. We chatted for a while, and Mateusz asked us if we wanted to go to a nearby pub and chat more. We were delighted and went with him. We ended up talking for over four hours! What's the best part? Mateusz knew no ASL, so we talked the entire time in International Sign! How cool is that? Even today, I still keep in touch with Mateusz on Instagram, and we have occasional chats in International Sign!

Marshall Hurst is an MBA student in Saunders College of Business. He studied abroad at RIT Croatia in Zagreb in fall 2017 and did an internship in Sydney, Australia in summer 2019.