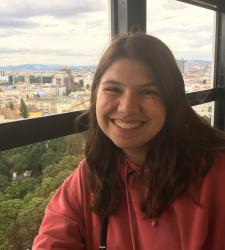 When I initially decided to study abroad on the Summer Psychology in Croatia program, I imagined the classes would be identical to RIT Rochester’s psychology courses (I had already taken two psychology courses at the main campus). When I arrived to my first day of class in Croatia though, I quickly realized I would reap the benefits of an RIT course – the grading structure, the language of instruction being English, etc. But I would also gain a valuable cultural perspective - how the concepts we would learn about apply to Croatian society and the experiences of Croatians.

While abroad, I took Positive Psychology and Abnormal Psychology. In Positive Psychology, we learned about the mindset of humans and how positivity and mindfulness impact people’s psyche. Throughout the course, we learned about how Croatians typically think in both an introspective sense and in how they present themselves and how practicing some of the material discussed in the course could positively impact their lives.

In Abnormal Psychology, we learned about concepts on a more general scale and about some of the research being done in Croatia related to abnormal psychology. We visited a research institute in Croatia to hear about the research projects of several professors. This was a fantastic experience that provided the class with insight into how research is conducted. It also gave me a deeper appreciation of psychology research and all of the work that goes into it.

Throughout both of these courses, I was in classes with Croatian students. We often had active group discussions about the topics we learned about, allowing me to see the cultural differences between the students at RIT Croatia and students from Rochester. Our discussions were spearheaded by comparing and contrasting the different cultural perspectives each of us brought to the table, helping us gain a deeper understanding of the material, as we discussed it from multiple points of view. Our class discussions reinforced the importance of diverse perspectives as our conversations were more meaningful and productive.

In addition to the two courses at RIT Croatia, we took a week-long study tour that took place at the end of the program. On the study tour, we visited Vienna, Austria and Munich, Germany. In each of these cities, we experienced a combination of class activities and free time to explore the city.

As part of our continued classwork, we learned about famous philosophers – both past and present – who have significantly impacted psychology by visiting museums, taking guided tours, and having discussions. Of all the activities we participated in, the highlight for me was visiting the Sigmund Freud Museum. Not only was I able to learn about an impactful psychologist led by a guide, but I was able to be in and see where Freud lived for 47 years since the museum was his home!

Outside of our class activities, we had time to explore on our own. In Vienna, our group got ‘Vienna Passes’, which gave us free or discounted access to many different attractions around Vienna. I visited Beethoven’s apartment, had dinner on the grounds of a palace (Schönbrunn Palace, Schlosspark Schönbrunn), rode on a Ferris wheel built in 1897 (Weiner Riesenrad), toured the Vienna location of the UN, and so much more.

In Munich, we stayed in the center of Munich, so it was easy to explore the city and all it had to offer. I visited the English Garden, Munich’s largest park, and enjoyed walking through the city center, which was littered with the amazing music of street performers. While in Munich, I also visited the BMW Welt (museum), which was right next to an Olympic Park!

Before visiting these places, I had only traveled within the U.S., so the freedom to ‘roam’ international cities like Vienna and Munich made me realize just how massive the world is. Though I am sure that sounds cliché, it is true! Never before did I think that I would ride a Ferris wheel in Vienna - but I did, and it is an experience that I will never forget. Yes, I had ridden Ferris wheels, visited museums and gardens in the U.S., but having this familiar experience in a completely new and unexplored city to me felt so freeing. It reminded me that there are infinite places I can visit and many adventures to be had if I take the leap of faith to find for them and explore with an open mind.