Where I Left My Footprint in Europe

Where I Left My Footprint in Europe 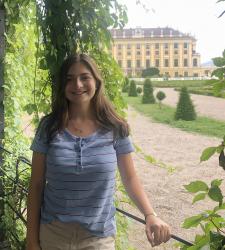 I did not know that I was in for an adventure of a lifetime as the airplane touched down in Zagreb, Croatia. For the first time in my life I was completely alone in a country where I did not know the language, however it would not be the last. Throughout my six weeks in Europe I left my footprint in a total of five different countries and fell in love with an aspect of every one.

Croatia was my home away from home during my stay in Europe. I quickly found myself acclimating to the culture and referring to my new apartment as ‘home’. Seeing my address on the outside of my apartment building elicited an exhausted sigh of relief as I returned from a weekend adventure. Zagreb had a fast pace in the heart of the city, and luscious parks surrounding the outskirts, which is where I liked to study. My commute to class during the week became a routine I still remember. I loved the rhythm of the city and the flow of people all determined to arrive at their destinations on time. One of my favorite places to unwind was in the center of the city at sunset. I sat watching people return from their days at work while soaking up the warm rays and listening to the gentle lapping of water. Kids often came up with a Kuna, a Croatian coin, and threw it in the fountain with their eyes closed hoping for their wish to come true.

Dubrovnik is a shoreside city in Croatia that I was lucky enough to visit. I traveled back a thousand years as I climbed the stairs of the city walls and peered into the horizon. I could envision battleships charging towards the strong walls of Dubrovnik and ultimately succumbing to its power. I kayaked five miles through the Adriatic Sea encircling the old city and ventured to Lokrum Island off the coast of Dubrovnik. Watching the sunset from the peak of Mt. SRD 1,362’ in the air was one of the most peaceful experiences of my life. Overall, Croatia will always be a place I call home.

My first weekend excursion was to Budapest, Hungary. We took an overnight bus and then had to navigate the Hungarian subway system to get to our Airbnb. I always describe getting into our Airbnb like trying to win an Escape Room. The owner of the apartment had left us multiple passwords and keys and figuring out which passcode or key went where was a difficult task at 1 a.m. Budapest was easily one of my favorite destinations. After our first day of adventuring, I had become encompassed by both sectors of the city, Buda and Pest. Buda Mountain was home to the old King’s palace, called Fisherman's Bastion, and a monastery. I loved the archaic and nature-friendly feeling of Buda. While in Buda I went into a labyrinth that was supposedly home to Dracula. Pest housed the city life of Budapest as well as the Parliament building. In Pest, I relaxed after a long day in the Széchenyi Thermal Bath which is a natural hot spring. The two sectors are united by the Széchenyi Chain Bridge that runs over the Danube River. One of my favorite memories from Budapest was taking a cruise down the Danube and learning about the history of the city. At the end of our trip, I looked into how to move to Budapest in the future.

I left my next footprint in Venice, Italy. Venice’s culture welcomed me immediately. I was in awe of the Basilica Cattedrale Patriarcale di San Marco and ate breakfast while looking at the church every morning of my stay. I climbed St Mark's Campanile and was able to take in the whole city from 323’ in the air. I toured the courthouse and old prison of Venice and even walked the Bridge of Sighs that many prisoners walked in the past. I loved every second of my gondola ride through the canals of the city and ate the best food in Venice. My favorite meal was a pasta and lobster dish that had homemade noodles. On my last night in Venice, I took a ghost tour of the city and learned about its spiritual history. If presented with the opportunity, Venice and the rest of Italy are definitely on my travel bucket list.

Next, I ventured by train to Vienna, Austria. Vienna had a similar environment to an American city with tall buildings, bright lights, and bustling people. Compared to the other cities that had a much more unique architecture and relaxed tempo, Vienna reminded me of home the most. My absolute favorite day in Vienna was my day at Schönbrunn Palace. I toured the palace, reenacted prominent statues, raced through a maze, and relaxed in the botanical gardens. I also went inside the most extravagant library I have ever seen. Every wall was covered in books and the ceiling had a beautiful mural painted on it. The Hundertwasser House showed me a new type of art and taught me the power of observation. Lastly, the House of Music took me back to the classic composers, specifically Mozart who was born in Austria and taught me the science of music. If I were to go back to Vienna I would be able to find things that I missed during my first trip there.

The last leg of my adventure brought me to Munich, Germany. On the train ride, I watched rolling hills take me from Vienna to Munich. The first thing I noticed about Munich was its incredible architecture. I watched the Glockenspiel in the center of the city and felt like I was watching the ‘Welcome to Duloc’ scene from the movie Shrek when the figurines sang and danced. I ate at the notorious Hofbrauhaus and watched a German band play music in lederhosen. Of all of the cities I visited, Munich definitely had the most unique culture. My favorite part of Munich was watching people surf the Eisbachwelle River. I witnessed a march for climate justice light up the city streets and felt empowered by the activists. I concluded my stay in Munich with a tour of Bayern Stadium and the best steak and potatoes dinner I have ever had. Experiencing Munich’s unique culture will always stand out to me as a highlight of my travels.

Although I like to think I left my mark on Europe through my study abroad experience, I think Europe actually left its mark on me.

After my adventure, I found I had a new sense of confidence in my abilities to thrive in new environments. I learned to act on the fly and acclimate to new surroundings quickly. Exploring Europe also made me more conscious of some of the biases Americans have. During my program, I often felt confused by the many new cultures, which made me more understanding of people from other countries who feel overwhelmed in America. As I am writing this piece and reliving my experiences, I cannot wait to get back to exploring the world.

Jesse Phelps is a  Physician Assitant major in the College of Health Sciences & Technology and studied on the Summer Psychology in Croatia program in Zagreb, Croatia in summer 2019.