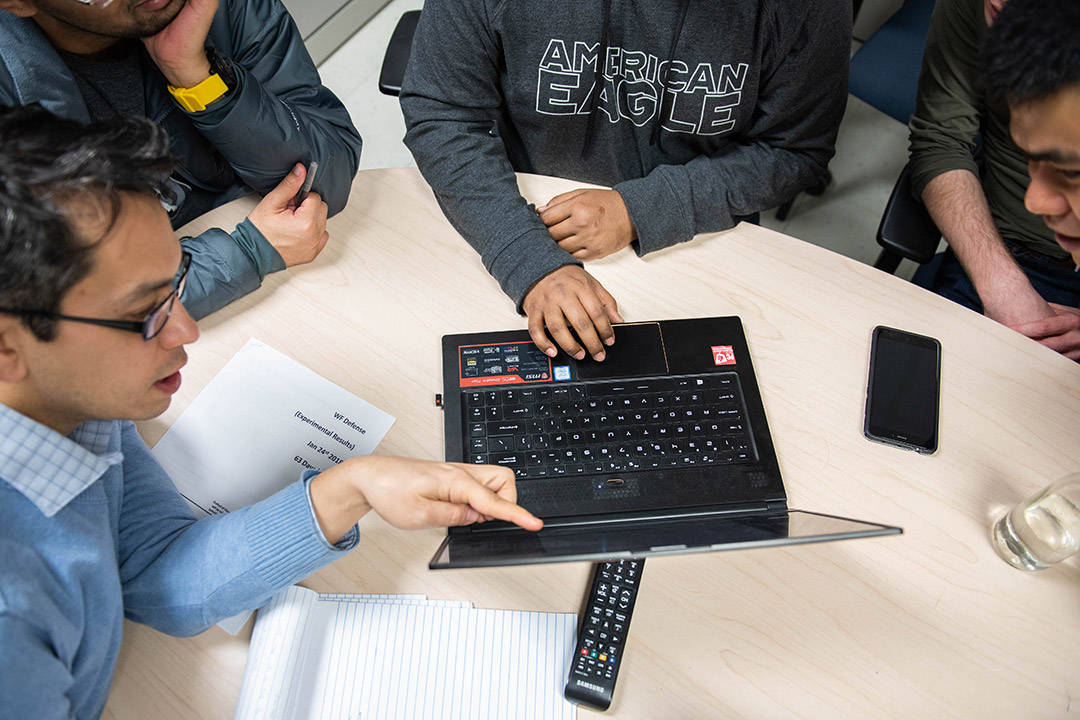 A team of RIT student and faculty researchers is working to better understand a new website fingerprinting attack that uses a machine-learning technique called “triplet-loss learning.” This is one of four RIT cybersecurity research teams being honored at the ACM Conference on Computer and Communications Security (CCS), Nov. 11-15 in London.

RIT researchers are heading to London in November to share four of their top cybersecurity research projects at an Association of Computing Machinery (ACM) conference. The RIT research varies from studying new machine-learning cyberattacks to an analysis of Security Operations Center issues.

Four RIT papers were accepted to the 26th ACM Conference on Computer and Communications Security (CCS), held Nov. 11-15 in London. The event is the flagship annual conference of the ACM’s Special Interest Group on Security, Audit and Control (SIGSAC).

The conference brings together information security researchers, practitioners, developers and users from all over the world to explore cutting-edge ideas and results. About 150 papers were accepted to the conference.

“Having four papers recognized is a record for RIT,” said Matthew Wright, professor and director of the Center for Cybersecurity at RIT, who will be attending the conference. “This is the ACM’s major conference in computer and network security and one of the top four such conferences in the field, so everything presented represents a significant contribution that leading researchers in the field deemed worth reading and hearing about.”

The team believes its findings will encourage center professionals to develop a better understanding of each other. The study also proposed research opportunities to improve the efficiency and effectiveness of centers.

Researchers explored how the Tor anonymity system is vulnerable to an attack called website fingerprinting, which requires huge amounts of data to be downloaded and regularly refreshed to attain high levels of accuracy.

With the research, authors demonstrated the effectiveness of a new attack using a machine-learning technique called “triplet-loss learning,” which enables an attacker to perform effective website fingerprinting attacks with much less data—as few as five website downloads for each site the attacker is interested in monitoring.

“Given that the attack could be conducted with minimal resources by someone sniffing the victim’s wireless internet connection, it highlights the need for designing effective defenses to help keep Tor users safe,” said Wright.

You Are Who You Appear to Be: A Longitudinal Study of Domain Impersonation in TLS Certificates, by Taejoong Chung, assistant professor of computer science at RIT, and other University of Maryland and Northeastern University researchers.

The study looks at the threat to end-to-end authentication, which allows users to know who they are communicating with online. The researchers identified a new classification of an impersonation attack that they call target embedding.

After conducting a user study, researchers found that target embedding is the most effective attack against browsers today. Their analysis looks at how target embedding impersonation has evolved, who is responsible for issuing impersonating certificates, who hosts the domains, where the economic choke-points are and discusses counter-measures against this growing threat.

To address the critical workforce needs in cybersecurity and help solve cybersecurity problems, RIT has announced the creation of a Global Cybersecurity Institute (GCI). The new three-story facility will allow RIT to address the global cybersecurity crisis by conducting groundbreaking research, education and professional training and development. Steve Hoover, the Katherine Johnson Executive Director, is running the GCI. It is expected to open in fall 2020 and will be the first facility of its kind in upstate New York.