Student Spotlight: The voice behind the curtain of the RIT women’s hockey team 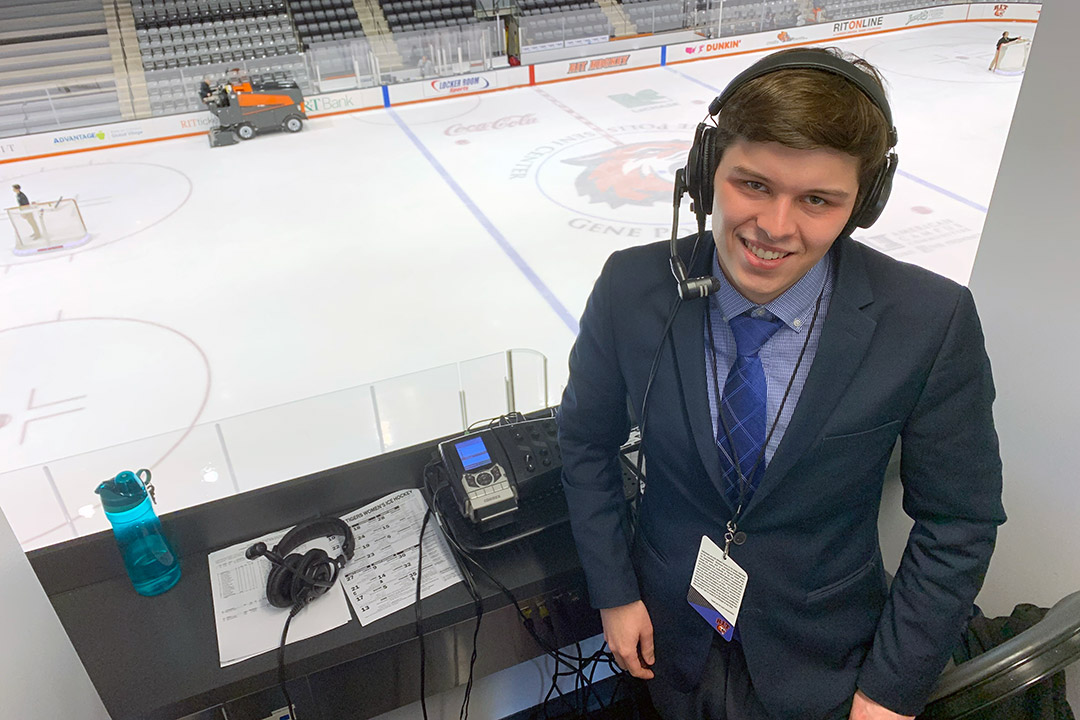 Fourth-year computing and information technologies student Andrew Bentkowski has become the voice of the RIT women’s hockey team on the radio. Announcing the play-by-play action as it happens, he never gets tired of the excitement that it brings him as a fan.

Growing up in Buffalo, N.Y., Bentkowski always had a desire for hockey, but he never had the time to play on the ice. At RIT, he put his passion into commentating on the sport instead.

Bentkowski can be found on WITR 89.7, the student-run radio station, during the women’s games, as well as on the RIT men’s hockey pre- and post-game shows.

What brought you to RIT?

I wanted to go into computing and I knew RIT was one of the best colleges around for this career path. I toured different schools, but I knew RIT was home from the minute I stepped foot on campus. It seemed very person orientated, like I can actually make an impact here and I’m not just another cog in the machine. I liked that professors teach the classes and not just the teacher’s assistants—and the small classroom sizes.

How did you get into announcing for the RIT women’s hockey team?

I wanted to join WITR ever since I came to RIT, but I never had the time to get to the radio station until my third year. I wanted to have my own radio show, but when they were going over the presentation for new members, they mentioned the different categories and one in particular stood out to me. There was a broadcasting team for hockey and I jumped at the opportunity. I had experience growing up commentating on hockey videos on my YouTube channel. I’ve always enjoyed doing it, but I never thought I would get a shot to do it for a professional hockey team. I gradually got involved and when the seniors graduated it was my turn to take over and I just ran with it.

For the women’s games, I call the game as I see it happening. As soon as the puck drops, I have to say who won the faceoff, who has the puck and where it’s going. The press box is a professional setting so I have to keep myself composed but also stay enthusiastic at the same time. It’s a very interesting balance to maintain. You can’t be monotonous with your phrasing since you’re talking for about 20 minutes straight. It takes a lot of time getting used to doing that, but over time it becomes easier. I also have to know the names of players and their numbers when commentating. The RIT team is easy to memorize, since I get the same roster for the semester. The opposing teams are a little more difficult to keep up with since the RIT women’s hockey team faces a different school every week.

What’s your favorite thing about announcing?

I love just being able to entertain other people; it’s something I have always enjoyed doing. One of the funniest things that has ever happened was someone from the other team tweeted at the RIT women’s hockey team that I mispronounced a player’s name. I thought it was kind of cool because I know people are listening. Knowing that I’m providing a service for something that I’m really passionate about is really cool.

You are a student ambassador; what do you do for that?

I am the student ambassador for the iSchool (School of Information). As a student ambassador, I serve as the bridge between the students and the staff of our school and also a part of the outreach to new students. I’ll give tours to prospective students. I’ll work open houses and see if people have questions from there. I speak to people if they want to change their major. Basically, I am involved in anything relating to student life and the school.

What are you planning to do after you graduate in May?

I will be going down to Raleigh, N.C., to work for Cisco in July as a technical consultant engineer. It’s kind of crazy that I’m moving so far away when my whole family is in Buffalo, N.Y., but the weather is warm so I’m very excited about that. Before I do that, I have about two months after graduation of just being a kid and having no responsibilities. I have my entire life to work, so I’m going to live my best life before I have to settle down.