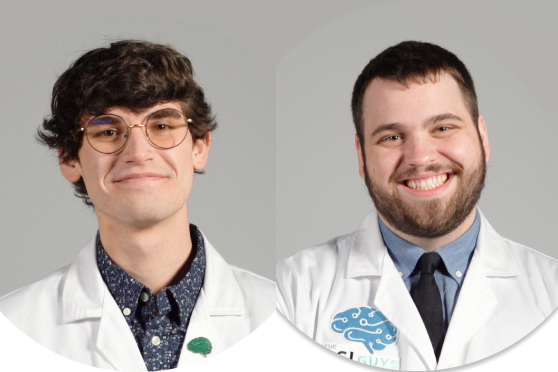 Harrison Canning, left, and Colin Fausnaught created The BCI Guys and produce free videos dedicated to removing the barrier to entry and increasing interest in the field of neurotechnology.

An assault when Harrison Canning was in the seventh grade caused a brain injury that left him unable to read, write, or attend school for more than a couple hours a day due to severe migraines.

“I wanted to be a robotics engineer,” he said. “I was fascinated by robots and was good at math and science. But my mathematical ability never came back.”

It took years for him to recover. But in that time, he developed an interest in how the human brain works. He came up with a theoretical design for a robot exo-suit that might help a disabled individual walk, and wondered if electric signals from a brain could control the suit.

Canning, from Granby, Conn., picked RIT to attend college because he was able to develop a program of study about neurotechnology in RIT’s School of Individualized Study. In his fourth year, he’s taken classes in neuroscience, computer science, design, and business. His interest in neurotechnology – any device that records, stimulates, or works with the brain – has grown even stronger, as has his interest in becoming an entrepreneur.

Although he wanted to be part of the “brain-controlled future” with neurotechnology, Canning said there weren’t many resources available to get them started. “Videos on the topic were few and far between, many of the readings that were available – while interesting – were hard to understand and neurotechnology courses weren’t offered at college.”

He and his business partner, Colin Fausnaught, a 2019 software engineering graduate from RIT, formed the BCI Guys, which stands for brain-computer interface technology. They recently launched an online educational series, “Foundations of Neurotechnology,” to lower the barrier of entry and inspire others to join the field. They reference 180 sources in the series and had input from seven professors in the field, three of them from RIT. Thousands of viewers from all over the world have watched the videos in the first several days they were released, and a new video is expected to be released each week.

“The course provides a non-technical, broad overview of the field of neurotechnology,” Fausnaught said. “We will provide a fundamental understanding of how neurotechnology works.”

Canning said they hope to use the videos to gain credibility to monetize videos in the future, and sell merchandise to further the business.

“We have customers ready and have a ton of analytics to back us up,” Canning said. “We’re hoping to use this to make a name for ourselves to leverage for investment in the future. For two young guys who don’t have a lot of industry experience, that’s a big thing.”

This isn’t the first time the duo has partnered up to pursue their passion. In 2018, Canning and Fausnaught wanted to start their own research group at RIT. With support from RIT’s Vice President for Research Ryne Raffaelle; Dan Phillips, associate professor and director of Effective Access Technology; and James Hall, dean of University Studies and executive director of the School of Individualized Study, they received a research grant and lab space, and founded a student-led brain-computer interface research club called the Neurotechnology Exploration Team, or NXT. By the end of their first year, membership included 60 students, 23 of them researchers.

In 2019, Canning, Fausnaught, and three other NXT members were invited by RIT Dubai to the Dubai International Maker Faire, where the team won a Maker’s of Merit Award.

That year, Canning also presented a TEDx Talk at RIT, describing his interest in neurotechnology and its possibilities.

Canning became a Gap Year Fellow in 2020. He took a year off school, received funding and mentoring to support development of his neurotechnology research group while still working toward his degree. He continued work with NXT, as well as exploring new business possibilities with Fausnaught, including a biodata-based blockchain company, a software real estate investment company, and the inception of the BCI Guys.

During the past few years, Canning has worked with brain sensors, movement of prosthetic arms, and researching motor imagery from brain signals. He said individuals suffering from a disability, a disease such as ALS or illness such as depression, anxiety or addictions may find life-changing treatments using neurotechnology in the near future.

“It’s a very big field,” he said, and hopes it will lead to helping others who have suffered as he has.

“Our interfacing with technology has to be learned, and I’m very focused on how we can make the experience of technology more human,” Canning said. “My overarching goal is to make computing more like natural human experience, interacting with data like 3D materials around us.”