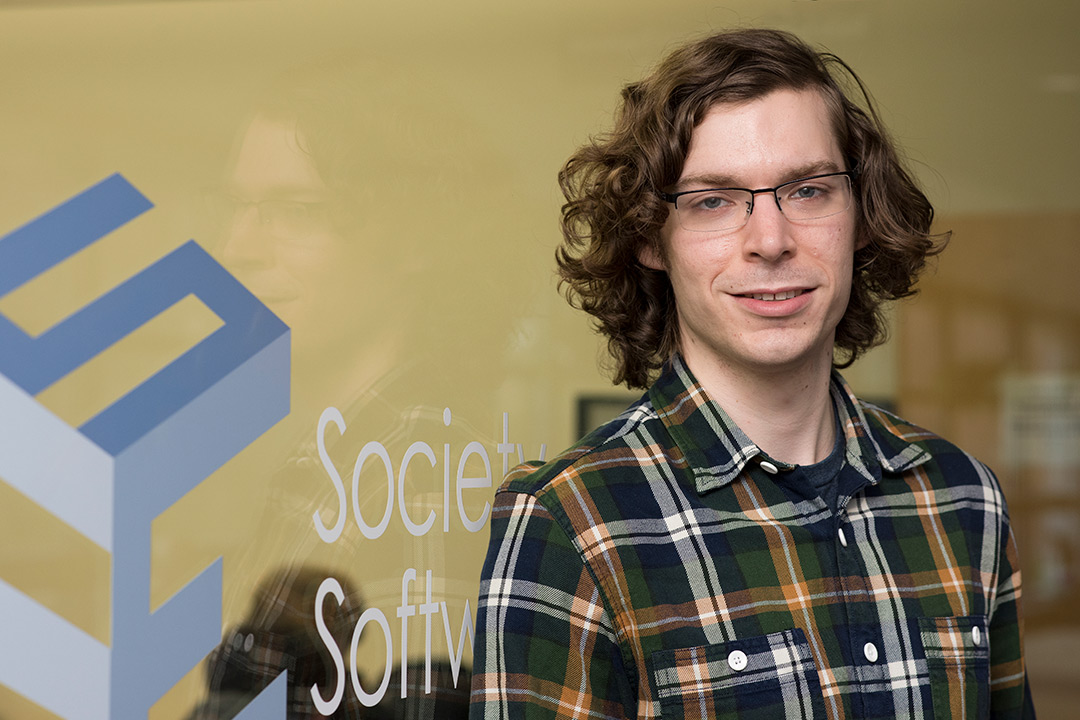 Robert McLaughlin worked on cutting-edge projects that were funded by the Alex A. Kipman ’01 Endowment for the Department of Software Engineering.

Robert McLaughlin ’18 (software engineering) has made an augmented reality sandbox, turned a table into a touch surface for a computer and helped create a digital assistant similar to Amazon’s Alexa— before Alexa came out.

McLaughlin, president of the Society of Software Engineers, said the group, which has about 60 members on campus, has four pillars: social events, networking, mentoring and projects.

The Kipman fund, which was championed by Kipman through Microsoft, fully supports the projects. Some exhibit their projects at the Imagine RIT: Innovation and Creativity Festival.

“The students are free to explore what they want,” he said, adding that there are usually three projects going at a time. To create the sandbox, students used a Microsoft Kinect camera to track activity in the sand in real-time. When the sand was moved around, a digital projector put color onto the landscape.

“Equipment for these projects for an average student would be difficult to procure,” said McLaughlin, who is from Philadelphia.

Kipman, who was also a software engineering major at RIT, is Technical Fellow, Cloud and AI at Microsoft. Kipman has led four major break-through products for the company, including Kinect in 2010. Microsoft HoloLens is his latest product creation, bringing holograms to Windows.

McLaughlin said the projects gave him talking points on his résumé, which helped him land three co-ops and an internship. “Being able to go in depth about a project is really pretty great,” he said.

McLaughlin’s last co-op was at Microsoft, which offered him a full-time position. He started in July as a software engineer.

What does he think about working for the same company as the guy who made the projects possible?

RIT publicly launched a $1 billion campaign in July. McLaughlin is one example of how students are already benefiting from Transforming RIT: The Campaign for Greatness. To learn more, go to rit.edu/transformingrit.