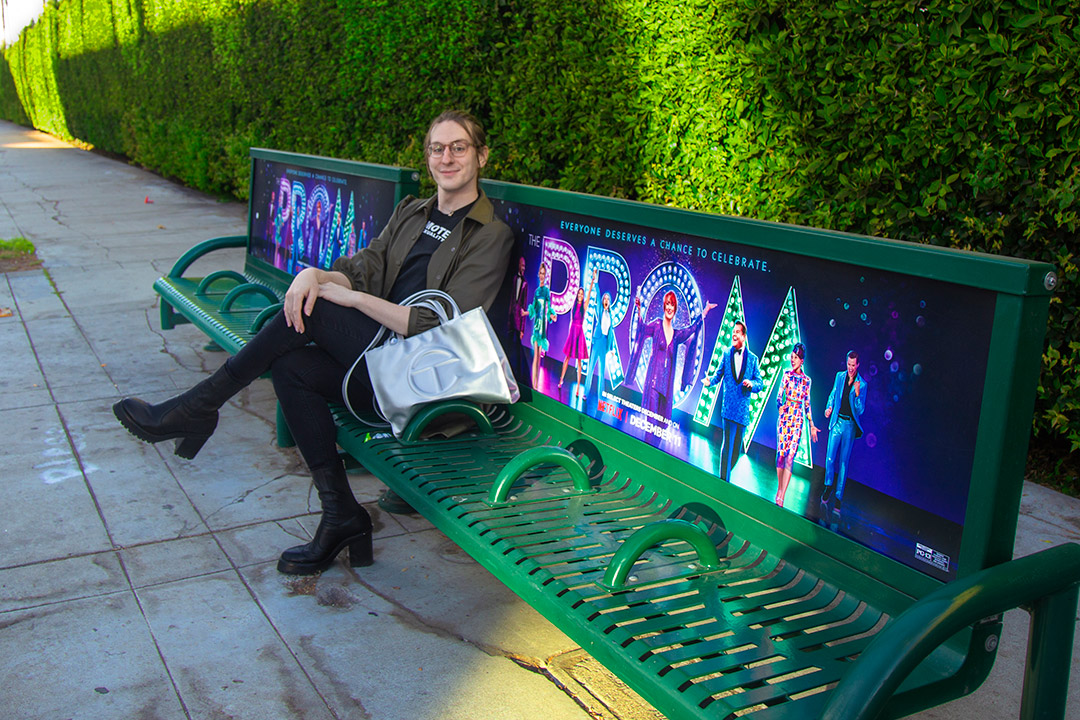 Early in 2020, Harlan Doolittle ’14 (film production) had just wrapped up working on Netflix’s Hollywood and was looking forward to adding visual-effects expertise to season 3 of the FX series Pose when the pandemic brought Hollywood—and the world—to a grinding halt.

Doolittle was fortunate, however, to be able to head over to The Prom, the Netflix ensemble comedy movie directed by Ryan Murphy, the television producer, director, and writer Doolittle had previously worked with on the American Horror Story series and other scripted shows.

“Luckily, The Prom was mostly done shooting, so they asked me to supervise their VFX (short for visual effects),” the VFX editor and assistant editor with Ryan Murphy Productions said. “I loved how I could pour over every detail on The Prom.”

As a VFX editor, the Los Angeles resident (who uses they/he/she pronouns) oversees virtually every visual-effects shot in each film or episode they work on by working with editors and producers on what they need creatively to help shape each individual shot with VFX artists and vendors. The Pittsford, N.Y., native had previously worked as an online editor at Encore Hollywood, a post-production facility.

Doolittle’s VFX work on The Prom—and the show’s strong message rooted in the need for inclusivity—was both personally and professionally rewarding.

“As a gay millennial I didn't have a whole lot of exposure to positive queer role models or stories—let alone coming-of-age stories—until my late teens,” they observed. “I had to dig for stories on the Internet or on forums to find people who were like me.”

Murphy’s award-winning show Glee (2009-15), about a show choir with disparate members dealing with social issues regarding sexuality, race, and relationships, represented a watershed moment in time for Doolittle.

“Some of us don’t really get the chance to go incognito about being queer, and as an effeminate kid who danced competitively and loved pop culture, that show resonated with me,” they recalled. “This was the first time I had seen a kid like me get a happy ending, enshrined on mainstream television and universally recognized.”

A decade later, Doolittle was working on a similar story for a new generation.

“It means the world to know there are queer kids out there like me who might get a much needed dose of courage and feel-good hope from The Prom, and to know they can dream big without having to hide themselves or feel ashamed,” Doolittle said.

And while they graduated from RIT nearly seven years ago, Doolittle said they continue to regularly apply what they learned in the School of Film and Animation inside RIT’s College of Art and Design to their studio work.

“Many other film schools put you through years of theory before ever picking up a camera, but at RIT the emphasis was always on completing films—from pre-production all the way through post,” Doolittle recalled. “You had to show your work at screenings or you failed the class.”

“The real world isn't much different,” they added. “You have to work hard and answer for yourself, and you have to work well within a team setting, too. My job is to support the story being told, and it’s such a blessing to be able to tell stories for a living.”