Our students and faculty have a proclivity to cross boundaries with their art — often bringing their creativity to theater and other live performances.

From RIT to Broadway 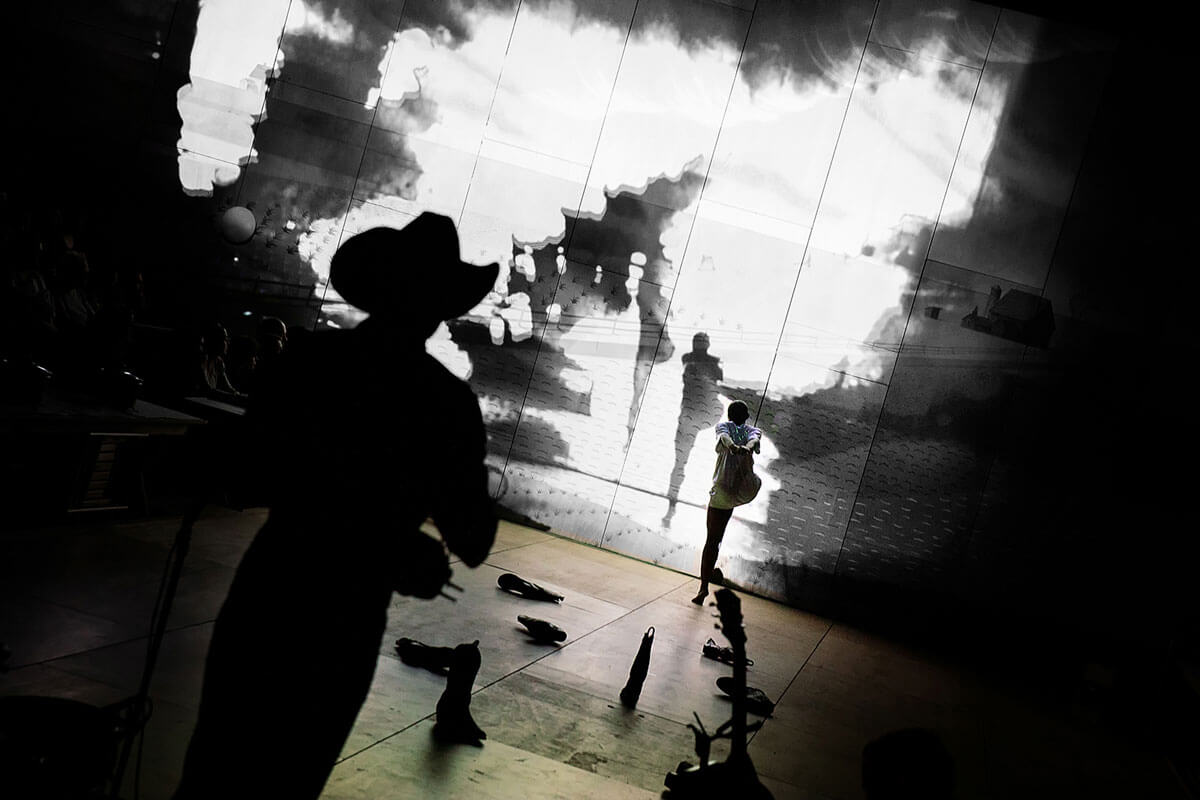 The awe-inspiring projection designs in the Tony Award-winning Broadway revival of “Oklahoma!” were created by Josh Thorson, assistant professor in the School of Photographic Arts and Sciences. The interpretation of Rodgers and Hammerstein’s classic 1943 play went on a successful Broadway run at Circle in the Square Theater in 2019 and 2020.

Thorson’s work on the production earned him a Drama Desk Award nomination for Outstanding Projection Design. The Drama Desk is an organization of writers, editors, publishers and broadcasters that honors the best of New York City theater. His primary work can be found in the “smokehouse” and “dream ballet” scenes.

In the former, the first portion of the scene is a complete blackout, before a wireless infrared camera focuses on the two male protagonists, Curly and Jud, who are competing for the same girl, Laurey. The camera captures different close-up views of the characters that project onto a 55-foot-wide wall during the song “Poor Jud is Daid” and ends with a shot of the both of them.

The dream ballet scene is similar, using video to bring the audience closer to the “dream Laurey” dancer. Thorson employed live special effects to make a smoky effect that “amplifies the dream-like space.”

The creative work of Marla Schweppe, professor of 3D Digital Design, includes the incorporation of her theatrical background into performances on the virtual stage, animatronics, physical computing and tangible media, surgical simulation and collaborative support for the visualization and simulation of information and ideas.

For one project, she created augmented reality graphics for live performances of “S.M.O.O.C.H.,” part of Dashboard Drama VI — a car-bound theater experience. Participants are placed in the back seats of a car while actors guide the experience from the front. They presume the back-seat occupants, equipped with AR headsets, to be on a blind date and proceed to offer a variety of dating packages, taking them to places like outer space, a safari and the movies. 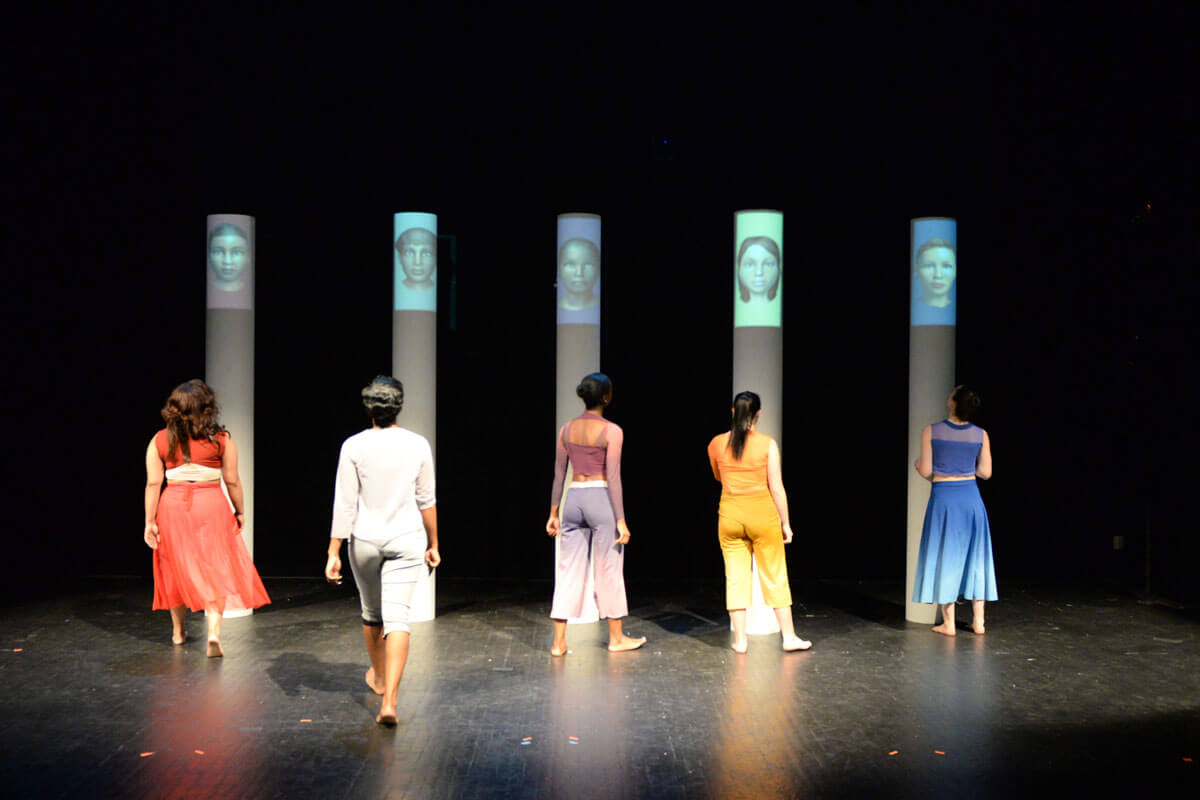 A dance performance collaboration with Joe Geigel, professor in the Department of Computer Science, and a dancer/choreographer from SUNY Brockport. Schweppe and Geigel created avatar face projections of the five dancers in the performance, controlling them with facial tracking software. The images were then projected onto columns on stage. 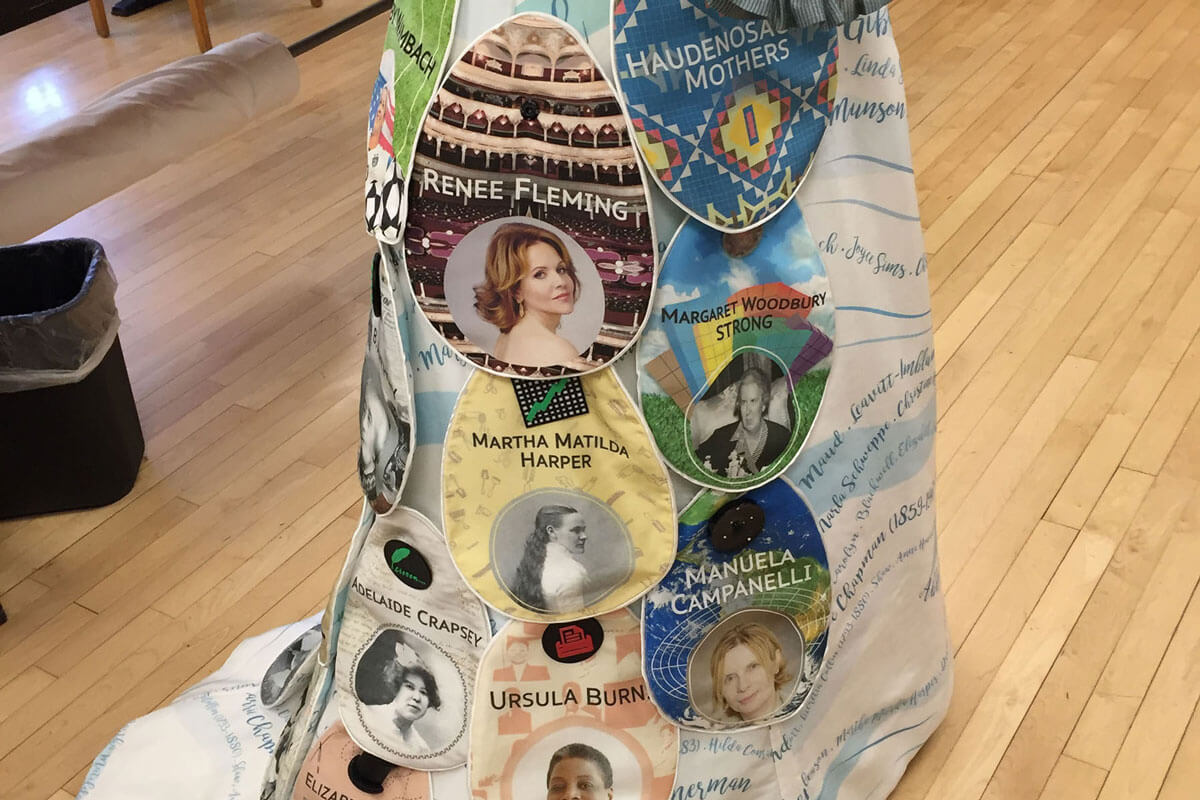 An elaborate silk dress honoring the accomplishments of many women with connections to Rochester, N.Y., was produced by Schweppe and fellow faculty and students at RIT. The Women of Rochester Dress features 3D-printed photo panels of pioneering females with ties to the local area, in addition to other names printed on the fabric. In total, more than 100 women — such as Susan B. Anthony, Kate Gleason, Harriet Tubman and Abby Wambach — are celebrated on the dress. The piece is on permanent display at the Women’s Rights National Historic Park in Seneca Falls, N.Y. This project was funded in part by an RIT Provost’s Learning Innovations Grant, an NSF ADVANCE grant, the RIT Cary Endowment and donations from Rosco GAMfloor and Dupont.

Schweppe, with the help of then-3D Digital Design student Kirk Lansman, designed and implemented an interactive dance piece. In the performance, Thomas Warfield, senior lecturer in the National Technical Institute for the Deaf’s Department of Performing Arts, teaches dance moves to four digitally-created kids. The avatars’ movements were developed using motion capture data as Lansman executed the dance. The project was sponsored, in part, by the National Center for Women in Technology.

Over the course of 29 years in the School of Film and Animation, Stephanie Maxwell, professor emerita, facilitated interdisciplinary and inter-university networking to bring artists of different disciplines together for collaborative art-making. An example is the RIT Philharmonic Orchestra’s “Fate and Destiny” performance. The concert featured a Maxwell-directed partnership between the orchestra and School of Film and Animation students, who created a visualization for some of the music. Their video combining analog, digital and imaginative creations accompanied a Beethoven composition to visually invoke the spirit of the famous composer’s sound.

Maxwell has spearheaded countless other similar live music-visualization collaborations, primarily with the University of Rochester’s Eastman School of Music. It’s provided students with many opportunities to incorporate their films and other videos into a live music environment.