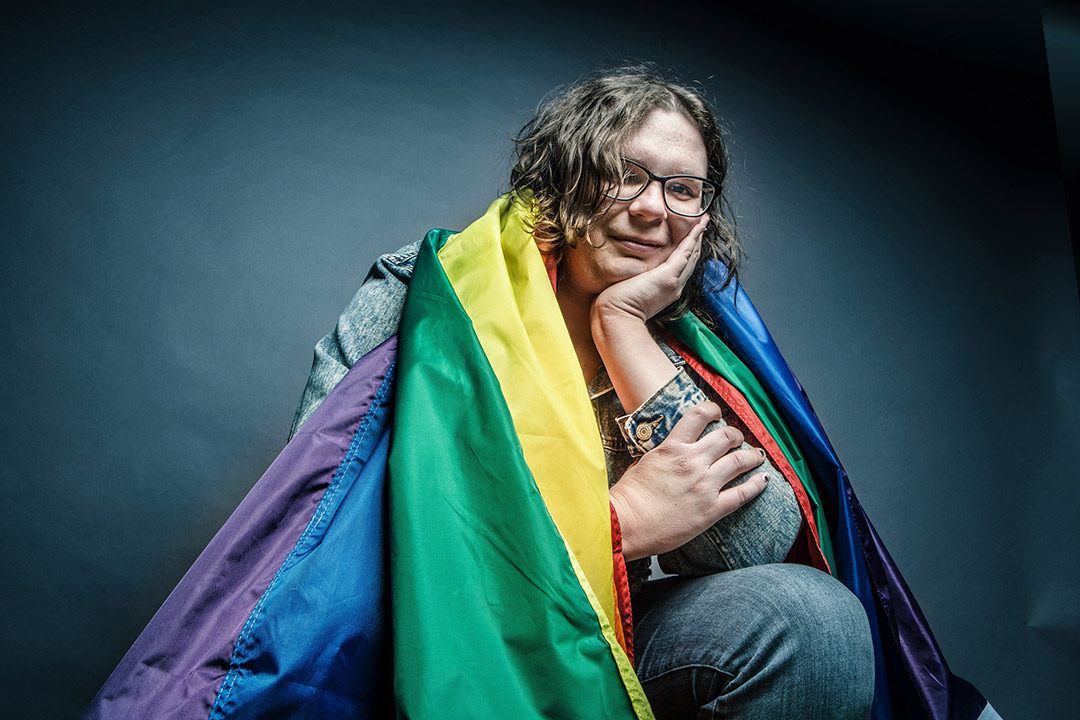 Emily Horton, a 2022 game design and development BS/MS graduate, is a member of Tangent—RIT’s support group for transgender and gender-questioning students. RIT students have more than 300 clubs and organizations to choose from today, and these extracurricular activities are a great way to try something new, find a niche, and build lasting relationships.

When Isabella Totino sees a poster on the wall, she views it as an opportunity.

That’s what happened during her second year at RIT when she saw a poster for a Design Jam with the User Experience club. She attended the event, joined the student club, and later became the organization’s co-president and treasurer.

When Totino graduates this May, the human-centered computing major will be putting the skills she learned—both in and outside the classroom—to work as a user experience designer at Liberty Mutual Insurance in Boston. 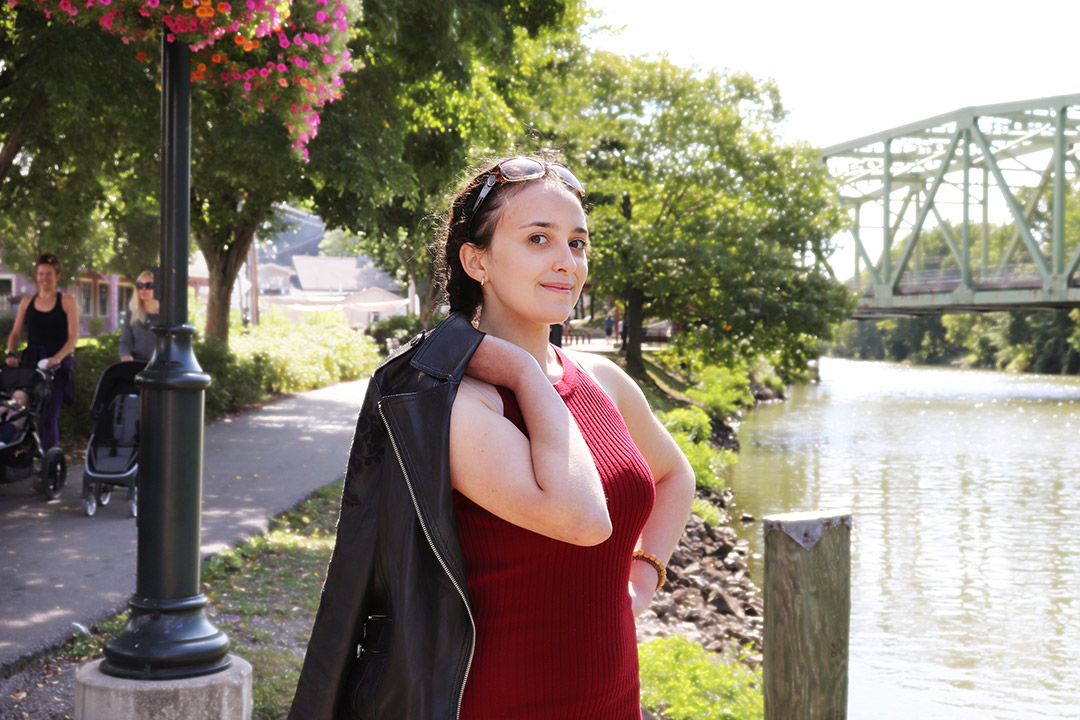 “College is your chance to explore and try new things,” said Totino, who is from Melrose, Mass. “When you see a poster hanging up on the wall and you think to yourself ‘that looks cool’—try it.”

RIT students have more than 300 clubs and organizations to choose from today. There are also 24 varsity athletics teams and numerous intramural sports, among other groups. For many students, these extracurricular activities are a great way to try something new, find a niche, and build lasting relationships.

For Totino, the User Experience (UX) club helped her find a passion for computing accessibility and making sure everyone has equal access to technology. In one club project, she worked on a team to develop an app prototype for a Rochester nonprofit organization. The group also has an active Discord where they post important surveys for UX studies and connect with alumni to get resume tips.

The first organization that Totino joined on campus was Women in Computing, where she has gotten to try her hand at graphic design and marketing the group’s hackathon event for women. She has also been a part of the Theme Park Enthusiasts club and even joined the Fencing club—despite never fencing before.

When Emily Horton transferred to RIT, she was excited to find Tangent—a support group for transgender and gender-questioning students. Her previous college didn’t have a community like this, and as a transgender woman she was looking forward to connecting with people with similar experiences.

“Being a part of a community with shared experiences can be liberating and energizing,” said Horton, who is graduating with a combined BS/MS degree in game design and development. “I also knew that I wanted to help the community and create a safer, happier, and more compassionate place for all.”

Horton became a part of leadership in Tangent and has helped run the weekly support group meetings. In the meetings, and on Discord, students can ask questions and talk about everything ranging from serious topics to life in general.

As part of Tangent, Horton has participated in clothing swaps where people trade clothes that don’t align with their gender and how they want to represent themselves. They have held panels with wider community to discuss what it means to be transgender and misconceptions about transgender people. They also do game nights with members from other LGBTQ+ clubs on campus.

“College can be difficult for anyone, and it’s nice to know that we can offer this positive resource for students seeking advice,” said Horton, who is originally from Dryden, N.Y. After graduation, she plans to work in the games industry. 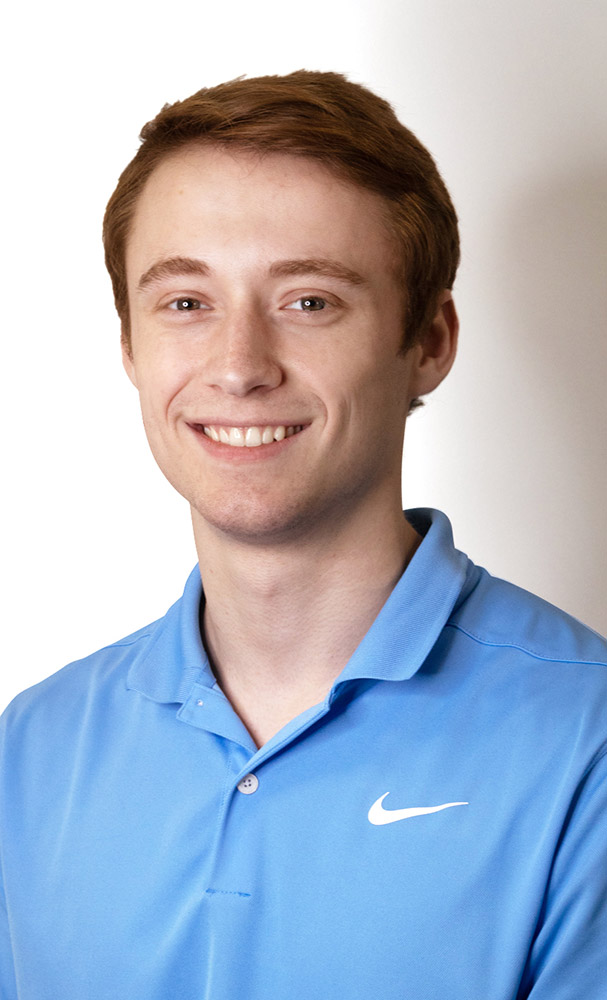 Nathyn Castor, a 2022 industrial engineering and engineering management graduate, is a brother of the Sigma Alpha Mu fraternity at RIT.

After his first year at RIT, Nathyn Castor felt like he wasn’t embracing the change that college was supposed to bring. He was looking to join a new group.

“I learned more about it and it wasn’t anything like what I saw in the movies,” said Castor, who is graduating with an industrial engineering bachelor’s degree and a master’s in engineering management. “What really pulled me in was the focus on values and the great community. Everyone really cares about each other and wants you to grow as an individual.”

He rushed and joined the Sigma Alpha Mu fraternity. He later held positions as the fraternity’s social chair and president.

Castor helped organize social events, including an Amazing Race-style scavenger hunt around campus with other Greek organizations. He took part in community service—a major aspect of fraternity life, where each member does about 15 hours of community service each semester. 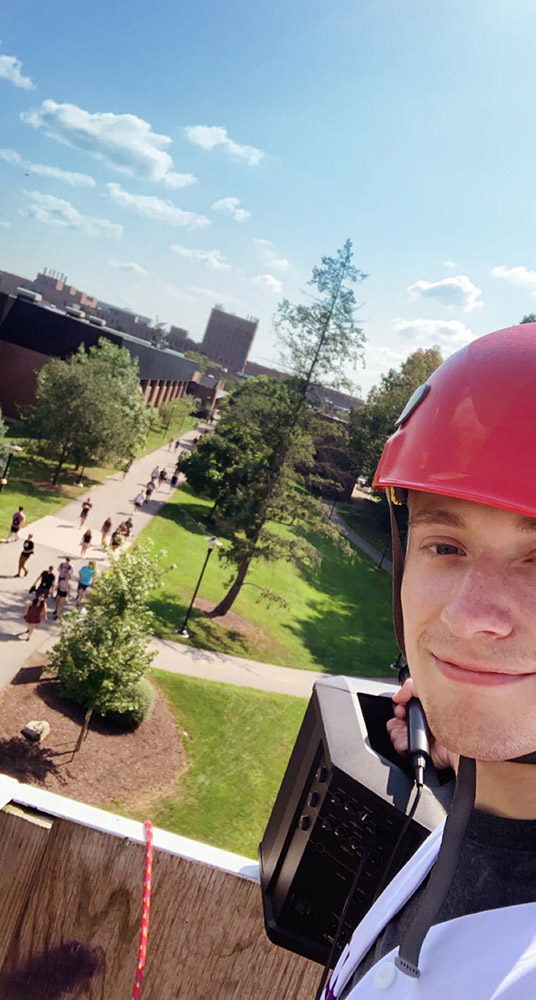 Nathyn Castor, a brother of the Sigma Alpha Mu fraternity, participated in the Pole Sit fundraiser, where fraternity brothers would take turns sitting in a crow’s nest high up on a telephone pole, 24-hours a day.

He also helped with philanthropy events, where the group raised tens of thousands of dollars for the Alzheimer’s Association, Make-A-Wish Foundation, and other nonprofits. One the major events was called Pole Sit—where fraternity brothers would take turns sitting in a crow’s nest high up on a telephone pole, 24-hours a day.

While on co-op at Inficon in Syracuse, N.Y., Castor was excited to learn that one of his bosses had also participated in Greek life while studying at RIT. After graduation, Castor has lined up a full-time position as an industrial engineer at Inficon. He also plans to stay involved with Sigma Alpha Mu.

“I’ve learned you can really benefit from joining groups and putting yourself out there,” said Castor, who is from Syracuse, N.Y. “Embracing the uncomfortable is good, because you can find new ways to surprise yourself, grow as a person, and make long-lasting friendships.”