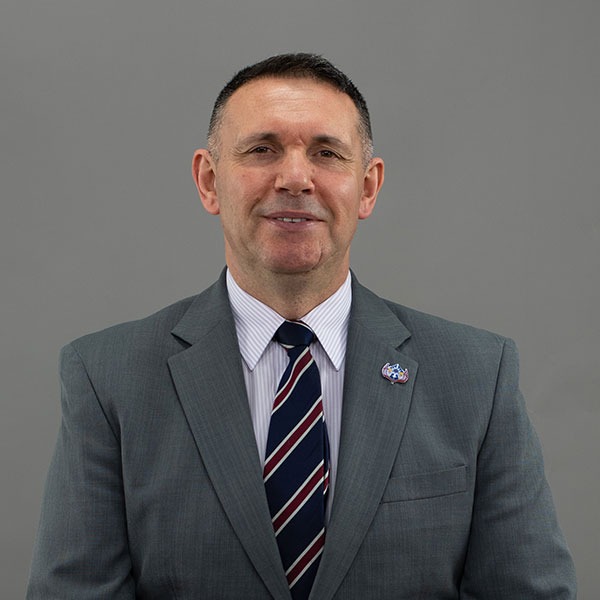 Former Consul General of the Republic of Kosovo in Iowa

Recently voluntarily retired after serving for more than twenty (20) years for Kosovo institutions in both military and diplomacy. Last three years of his public service he has served as the very First Consul General at the Consulate of the Republic of Kosovo in Des Moines, Iowa. Being the first diplomat and leading the only diplomatic mission in the State of Iowa gave him the unique opportunity to accomplish together with Iowa partners many achievements, but also a great opportunity to learn more.  For more than 9 (nine) years direct cooperation and communication with Iowa National Guard, Iowa State Government, Greater Des Moines Partnership, many City Mayors, their Chamber of Commerce, Universities and Colleges, rotary clubs, sport clubs, churches and other public and private companies and institutions.

Brigadier General (Retired), Gashi has served as the very first Kosovo Security Force/Defense Attaché to the United States. As a military/ defense diplomat in Washington D.C. except working with Pentagon and other defense / military and security institutions, he did coordinate activities and cooperate also with U.S. Congress and Senate, U.S. Department of State, DHS, FBI and other U.S. government agencies as well as NGO ‘s and Think Tanks.

He retired from Military as Brigadier General and with honorary rank of Major General after completing almost twenty years of service. He was Senior Officer in the Kosovo Security Force (KSF), with a proven academic record and with more than 18 years of experience in Security Sector Reform. As Chef de Cabinet for Commander Kosovo Protection Corps (KPC), was intimately involved in Force Development projects linked to the Comprehensive Proposal for the Kosovo Status Settlement and the creation of the KSF. Directly involved in the ISSR process in Kosovo and representative of KPC in the ISSR Secretariat. Active member of NATO Operational Planning Team Workshops. Served in a lead role in Working Groups on Dissolution of KPC and Establishment of the future Ministry of the Kosovo Security Force and the Kosovo Security Force.

Previously served as first Director of Security Cooperation Department working with Euro-Atlantic partners on bilateral security development and capacity building programs and partnerships, where as a result many bilateral MoU `s were signed under his leadership. A key member of the Minister for KSF and Commander of KSF’s immediate staffs, contributing to a wide range of conceptual and doctrinal development to support the KSF Vision. He has hands on experience in DDR (Disarmament, Demobilization and Reintegration) immediately after the war in Kosovo in 1999 working with IOM, UNMIK, and KFOR.

During his military and civilian experience, he has hosted, organized, co-organized many conferences and workshops. Also, he had the opportunity to be as a moderator and guest speaker to different audiences from different institutions both in Kosovo and United states of America, but also in some other countries as well. Amongst institutions or organizations he has presented or lectured are Drake University- IOWA, USMA West Point, SOC Sovereign Challenge conference, AUK- RIT, DMACC – Iowa,  University of Iowa, at many US military bases, different Embassies in US and Kosovo, Rotary Clubs, business companies etc.

Awarded with medals by:

•             Minister of KFS forces for distinguished service in KFS, and military diplomacy as an attaché in Washington D.C.

•             Commander of KSF for successful completion of the career in military service.

2016    Consul General to the Consulate of the Republic of Kosovo in Iowa, USA

2011    BG Security Attaché to the Embassy of the Republic of Kosovo in Washington, DC USA

Recently published an article on Kosovo Cybersecurity Security Building and the urgency for better protection with the ongoing COVID-19 pandemic.  https://issuu.com/amchamkosovo/docs/amcham_horizon_magazine_december_20…