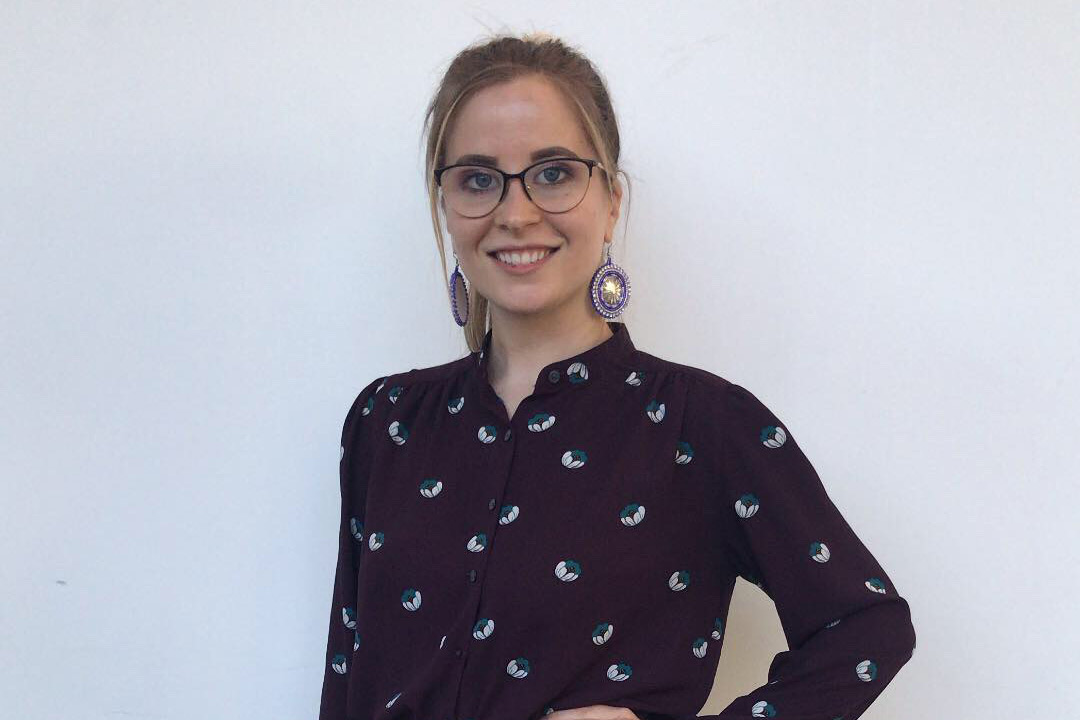 Jen VanStrander, a fourth-year international and global studies student from Rochester, N.Y., will be honored as one of this year’s recipients of the College of Liberal Arts Kearse Undergraduate Writing Awards. One of several students receiving this writing award, VanStrander earned this honor because of her impeccable writing from her capstone project, The Opaque Veil: Analyzing social and legal issues faced by foreign labor migrants from South East Asia to the Middle East. The award ceremony is at 12:30 p.m. on Friday, March 29, in the University Gallery

In addition to receiving this award and her other academic successes, VanStrander is also a dedicated member of the Native American community on campus. She serves as the e-Board secretary of the Native American Student Association and the American Indian Science and Engineering Society, and she is also active in the Latin American Student Association, the Latin Rhythm Dance Club, the United Leadership Coalition, the International Socialist Organization and the Young Democratic Socialists of America.

For more information about the Kearse Student Honor Awards, go to https://www.rit.edu/liberalarts/department-english/resources#awards.

Question: Why did you choose to come to RIT?

Answer: I’m a transfer student and I was originally attending a university down south in Florida. I wasn’t really being challenged in my major or at my school. I was getting straight As and not really trying, and there weren’t a lot of opportunities to be involved with extracurriculars, so I was really bored. I had a few professors pull me aside after classes and they encouraged me to transfer somewhere else and change my major. So, I listened to them and applied to RIT after my freshman year, and I got in. I was originally studying exercise physiology, they had just made the program as a major, but when I got my course schedule, I saw that I had already taken most of these classes, like chemistry and biology and their labs. I didn’t want to do the same classes for a third time in a row, so I emailed my adviser and told him, “I’ve had an epiphany, I need to change my major.” After that, I set up a series of meetings with the School of Individualized Study, sociology and anthropology, and international and global studies programs. Dr. Lawrence, a professor at the time, told me to start with international and global studies because, if I changed my mind later, it would be really easy to transition into another major that I was interested in. Ultimately, I ended up staying in this program because I really liked it.

Question: What was your reaction when you found out you received the Kearse Writing Award?

Answer: Dr. [Uli] Linke actually told me first, so I wasn’t too surprised when I got the email saying I received the award. When she told me about it I was really surprised. I had no idea that I would get something like this, I had never even heard of the award before. Dr. Linke told me more details about it and explained that my capstone was submitted for the Kearse award, explained that I was essentially competing against all the people in international and global studies, in sociology and anthropology, and all the people from the spring semester, because I did my capstone in the fall. I was surprised that I was competing against so many people and still received the award. It felt amazing.

Question: Can you tell us about your capstone project that earned this award?

Answer: My research focused on the overseas Filipino worker phenomenon as it relates to labor migration to the Middle East and the associated complexities thereof. It’s pretty dark. It discusses human rights abuses and there is no easy way to talk about it. I focused on comparative legal systems in the Middle East between Saudi Arabia, Jordan, Lebanon and the United Arab Emirates, and I discussed how all four legal systems, which are partially based on Sharia Islamic Law, are not up-to-date or equipped to handle the influx of foreign labor migrants that exist in their economic systems today. Because they are so ill equipped to handle these things, there are a lot of issues regarding visas, passports being stolen, various forms of labor abuse, not being allowed to go home to see their families—there is just a lack of labor protection laws in all of the countries I mentioned. My thesis argues that these issues stem from the Islamic law that is incredibly out of date and doesn’t pertain to the 21st century and should, thus, be changed. It’s pretty critical of Islamic law, but I could make the exact same argument for other countries, including in the United States. We do very similar things to the migrant workers in the United States. Even though I’m being super critical of these other countries, every criticism can be directly made back to the United States and other countries.

Question: What is your favorite topic to write about?

Answer: I really enjoy critical writing. I like writing critical works about anthropology and discussing the lack of representation in anthropology, sociology and archaeology. I also like writing about political topics, like dismantling capitalism. One topic I really enjoy is writing about people whose voices are ignored or silenced and why they are being silenced. Often, it’s people of color, women, migrants and other minorities. I try to use my voice, privilege, whiteness and education to give them a platform to share their stories because, unfortunately, people are going to listen to me more than they are going to listen to them.

Question: What helps you craft a well-written research paper?

Answer: All of the professors and teachers I’ve had in the past. Their voices are still in my head saying, ‘don’t write like this,’ or ‘indent that paragraph.’ I just hear their voices criticizing my writing every time I write, and it kind of fuels my anxiety and makes me a better writer. I’m just hyper-critical of my writing all the time, and it really keeps me at this advanced level of writing.

Question: How do you stay motivated and maintain your quality writing skills throughout the semester?

Answer: I’m a legacy student, I’m going to be the fourth person in my family to graduate from this institution, so I have big shoes to fill and a lot of expectations for myself. I also have the kids that I know in clubs, and I want to be an example and set the bar so they have someone to look up to. I have a lot of friends who have dropped out of school, and people need someone to look up to. Right now, we don’t really have anyone to look up to, so I feel like it’s my responsibility to be that person and help uplift the younger people I know. They help keep me going and keep me in check.

Question: What advice would you give to students who may struggle or be discouraged when it comes to research or project-based writing?

Answer: I would say to use the resources available on campus to help you with your writing, and don’t stress yourself out about it. No one is great at everything, and I’m not good at a bunch of things. If I were an engineering major for a day, I would probably cry. Just because you’re not super good at one thing doesn’t mean you aren’t amazing at something else, and who’s to say that the thing you’re good at isn’t as beneficial to society and our university.