Hundreds of people turned out to highlight women’s rights icon on Nov. 6 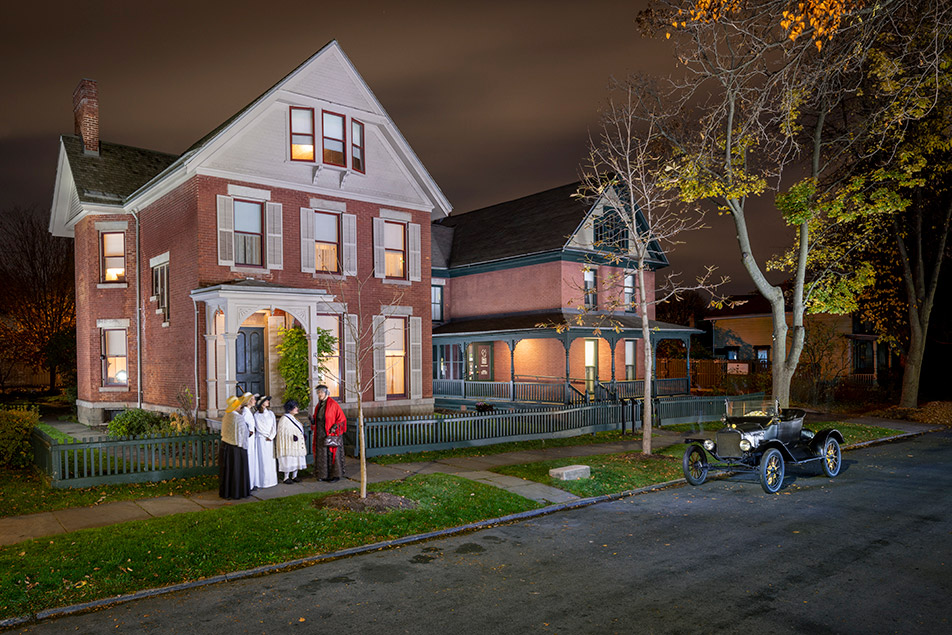 An early sunset didn’t deter the large crowd gathered at the National Susan B. Anthony Museum & House and the surrounding neighborhood for the RIT Big Shot on Sunday, Nov. 6. The community came together to shine a light on voting rights and equal rights as part of the annual photography project hosted by Rochester Institute of Technology.

“It was really important that we did this particular photograph two days before Election Day because of Susan B. Anthony’s legacy and the importance of equal rights and voting rights. This event is not about RIT or even the Big Shot. It’s really about the National Susan B. Anthony Museum & House,” said Eric Kunsman, co-coordinator of the Big Shot and assistant professor at RIT’s National Technical Institute for the Deaf.

Hundreds turned out for the event on the unseasonably warm night. The crowd was filled with chatter and a palpable excitement in anticipation of a Big Shot first: taking two long-exposure images simultaneously. The ambitious project attracted Mia Basilio, a second-year fine art photography student from Morgantown, Pa. This was Basilio’s first time taking part in the Big Shot.

“I love long-exposure photography and I do a lot of it in my own work, so the idea of everybody working together to make one big long exposure is really cool,” said Basilio. “It’s also a great opportunity to make connections and just experience different parts of the city and meet different people.”

Big Shot co-coordinators Kunsman and Dan Hughes, lecturer in the College of Art and Design, expressed gratitude for being able to bring the project back into the Rochester community for the first time since the start of the COVID-19 pandemic. The team initially planned to shoot at the historic museum in March 2020, but it was postponed.

“The beauty of the RIT Big Shot and the reason why folks participate is because it’s fun,” said Hughes. “The timing of working with the Susan B. Anthony Museum and House was key here. The original event was planned to celebrate 100 years of women’s suffrage and Susan B. Anthony’s 200th birthday, so starting it back up was important and still absolutely relevant given the state of the United States right now.”

Maureen Kissinger ’08 (visual media), from Sweet Valley, Pa., traveled to Rochester with her family to take part in the event. She participated as a student and shared that she still joins in whenever she is able. Her son, Wesley, has attended two previous Big Shots and was happy they could travel to Rochester to be involved again this year.

“I think it’s important that we talk about Susan B. Anthony so that people can know about the history of how women were able to vote and gained equal rights,” said Wesley. “That way we can see how much America has really changed and how much better it is for people now.”

RIT’s 35th Big Shot was sponsored by Kodak, Nikon, the City of Rochester, the 1872 Cafe, the Susan B. Anthony House & Museum, RIT’s College of Art and Design, and the National Technical Institute for the Deaf.