Film and animation students spend the semester in Los Angeles

Study Away: LA is a new program available for School of Film and Animation students 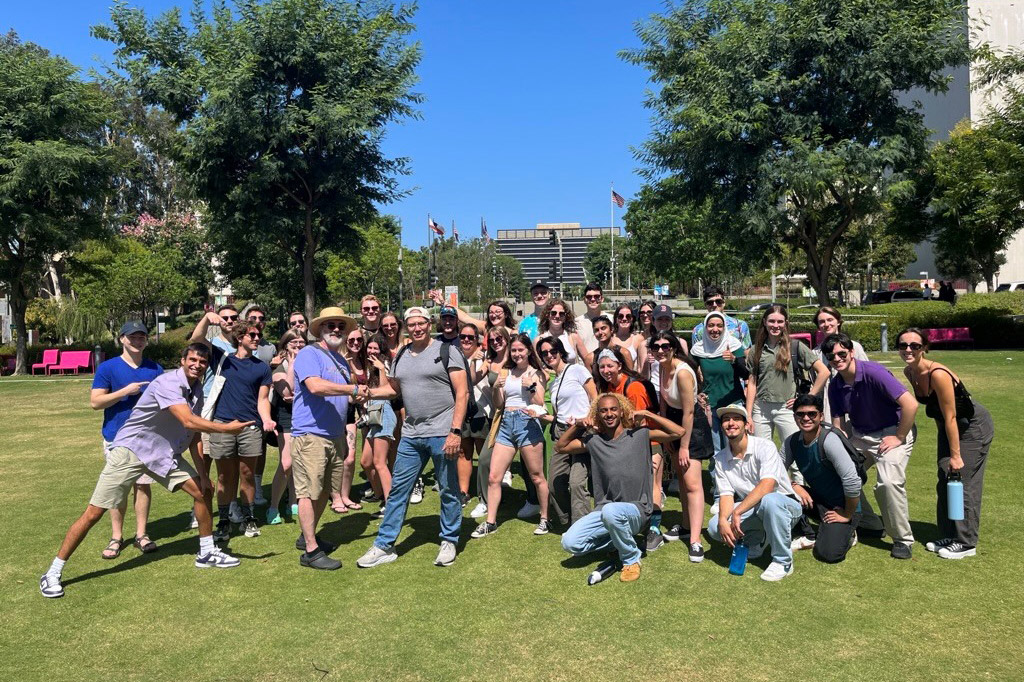 The first Study Away: LA cohort and David Simkins pose for a photo with students and a professor from Ithaca College, who are also staying in LA for the semester. Click through to see more photos from the trip.

Sixteen film and animation students will benefit from a West Coast classroom this semester through a new program called Study Away: LA.

Study Away: LA gives students in Rochester Institute of Technology’s School of Film and Animation (SOFA) the opportunity to spend time in Los Angeles for a semester to learn from industry professionals. The bulk of students’ time will be spent at internships, but they’ll also take two courses that will complement their study-away experience.

“Study Away: LA is an awesome opportunity for SOFA students to put what they’ve learned into action,” said Shanti Thakur, director of SOFA. “Students will be working side by side with industry veterans, learning the ropes in real time through their coursework and internships. It’s an exciting opportunity to help them network, learn the industry’s culture, and expand their worldview on what filmmaking is all about,” said Thakur.

All students enrolled in the program have found competitive internship placements, including placements at the Screen Actors’ Guild, Panavision, Mandalay Pictures, the Society of Camera Operators, the Television Academy, Warner Brothers, and more.

Sarah Mehani, a third-year film and animation: production option student, will intern at Abel Cine. As the semester begins, she says she looks forward to “working authentically” in the industry and that she is eager to learn from all of the people she’ll meet during the study away semester.

“I want to meet other film students because I learn so much from other people my age who are interested in expressing art in such a unique way,” said Mehani. “I also want to meet other creative professionals who will really push me to problem solve and learn more about film in innovative and interesting ways.”

David Simkins, a writer and producer who has worked in the industry for more than 30 years, was hired as the Study Away: LA program coordinator and facilitator. His work has been featured on popular TV shows such as Angel, Charmed, Blade: The Series, Graceland, The Lizzie Borden Chronicles, Wu Assassins, and more.

A firm believer from learning from experts, Simkins hopes to provide as many opportunities as possible for students to network. He and Thakur even created a course, Art and Culture in Los Angeles, which will feature a new guest speaker every week.

“When I was a film student, one of the most gratifying and essential gifts the department offered was the chance to meet and talk with industry professionals. Having the opportunity to meet industry professionals actually doing the job I hoped to do was essential in building confidence as well as de-mystifying the whole ‘movie making’ concept. They shared stories of just starting out, as well as early failures that were instrumental learning experiences toward eventual success,” said Simkins.

This year, Thakur brought the program to life, collaborating with Deese and other SOFA faculty members; CAD Associate Dean Christine Shank; Gretchen Burruto and Nan Burgess-Whitman in Career Services; Jenny Sullivan and James Myers in the Office of International Education and Global Programs; and Todd Jokl, dean of the College of Art and Design.

Jokl believes it is imperative for SOFA students and programs to have a physical presence in LA. Jokl said that the students in this new program are blazing a trail that he hopes other RIT students from programs across the university will follow.

“We’ve been discussing and planning for a SOFA presence in LA for some time now. The importance of the Los Angeles market to the film, animation, and entertainment industry can’t be overstated. Whether it is in traditional filmmaking, animation, or cutting-edge areas like virtual production, LA is the epicenter of that universe,” said Jokl. “Our alumni are in Los Angeles in large numbers, making their mark in the film and entertainment industries—as creatives, entertainment entrepreneurs, and as creative technologists, alike. It is important for our students to be out there, too.”

For the first semester, the program was only available to students enrolled in the film and animation: production option. In future years, the college aims to expand the offering to all film and animation students.