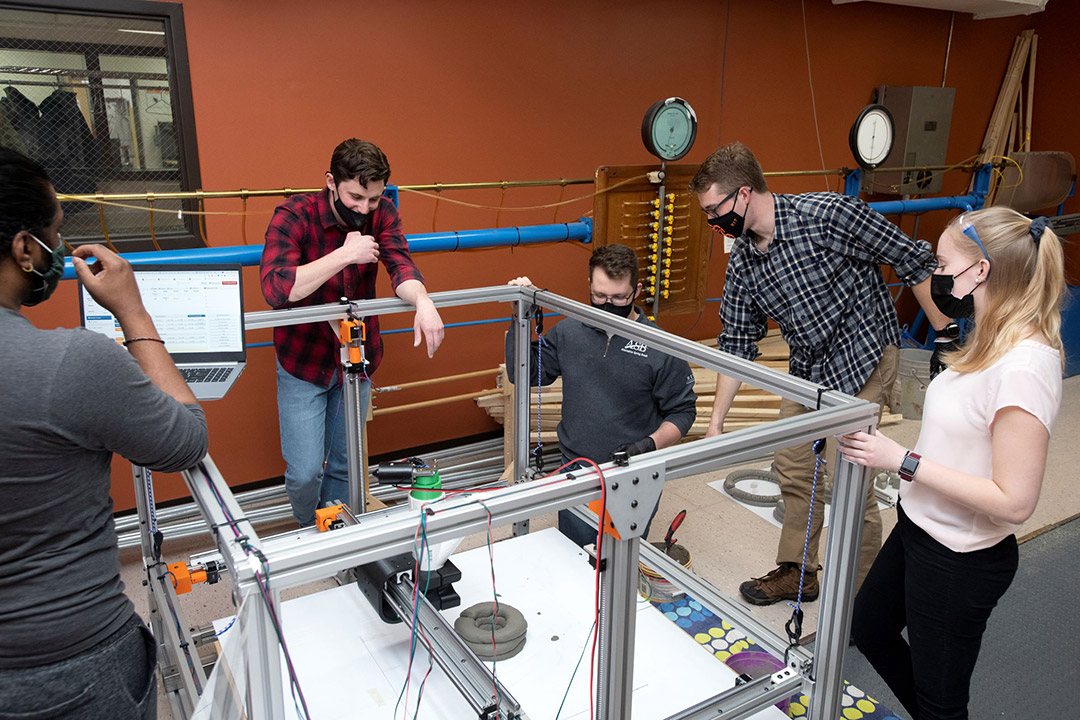 Meghan Britt, right, and other members of ConcRIT 2.0 test out their 3D concrete printer, one of more than 250 virtual exhibits to be shown starting Saturday at this year’s Imagine RIT: Creativity and Innovation Festival.

After a year’s hiatus due to COVID-19, the popular Imagine RIT: Creativity and Innovation Festival returns virtually on Saturday, May 1, with more than 250 exhibits of projects, research and performing arts of students, faculty and staff at Rochester Institute of Technology.

“We’re looking forward to sharing with the community what RIT students, faculty, and staff do best: create new things, solve problems, and inspire others,” said Ann Miller, director of Imagine RIT and Special Events. “This year we will have students from RIT’s international campuses participate. And the ability to explore these exhibits will be free for everyone who has access to the internet.”

About 20 of the exhibits will also enable viewers to interact live with the students in the chat feature for 15 minutes.

Just a few examples of this year’s exhibits include a 3D printer that uses concrete instead of plastic, a Snapchat app that creates a filter for phone cameras to make everything look like Vincent Van Gogh’s “Starry Night,” and mind-controlled toys activated simply by concentration that are intended to help children with attention disorders.

Some exhibits, such as an adjustable pediatric prosthesis and a mind-controlled wheelchair, were developed as access technology. And some, like the odor-free diaper bin, the diabetic neuropathy footwear device, and the rodent thermoregulator, are the result of senior design or capstone projects. 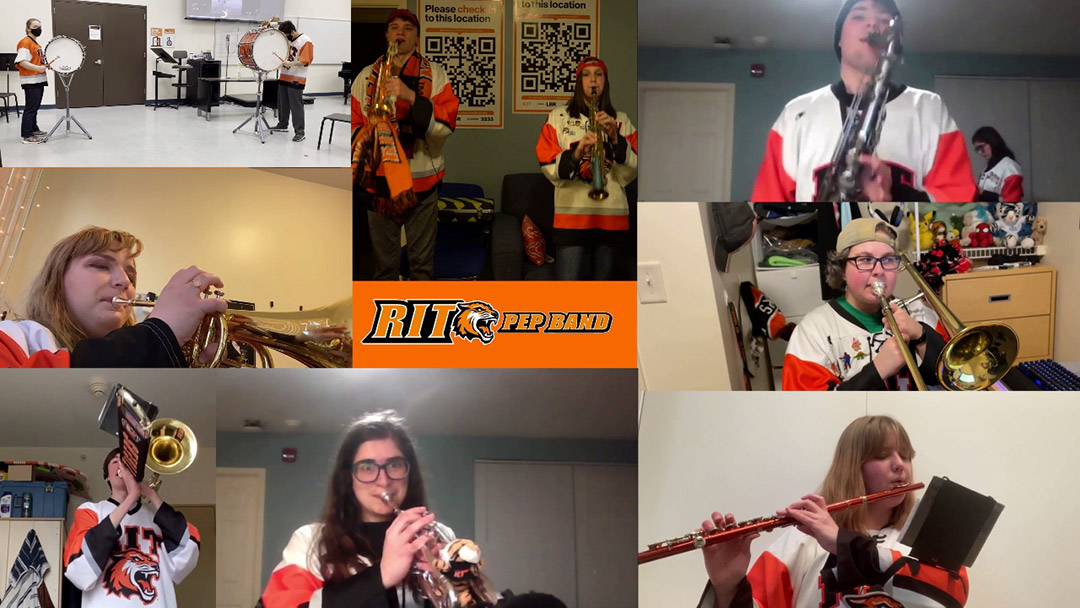 Members of the RIT Pep Band perform a virtual rendition of “Eye of the Tiger.” It is one of several music and dance performances offered starting Saturday at this year’s Imagine RIT: Creativity and Innovation Festival.

Last year, RIT joined the Public Interest Technology Network, a national partnership of colleges and universities committed to building the field of civic-minded technologists who seek to navigate the development and deployment of technologies to address societal challenges. Several exhibits fall under this category, including a mind-controlled wheelchair, reducing food waste in Haiti with solar fruit drying, the possibilities of hologram interpreters, creating a COVID time capsule, and learning how to avoid another pandemic.

The Modern Languages and Cultures Department in the College of Liberal Arts created a “World Music Map” that features more than 70 songs in 10 different languages taught at RIT—including American Sign Language—from more than 40 countries. The submissions came from students and faculty from the department. Using geolocalization to pin songs to a digital map of the world, each song’s video includes cultural information about the artists and music, and an English version of the lyrics when available in subtitles or in the description. Presenters will be available for a live Q&A from 2-2:15 p.m.

Without a need to appear on campus, several exhibits are from RIT students in Croatia, Dubai, China, and Kosovo, including tours of their campuses. An exhibit from the RIT Dubai Sailing Tigers describes their plans for an entry in an eco-friendly race in Monaco in July. Presenters will be available for a live Q&A from 10:45-11 a.m.

And Rishabh Java, a first-year industrial engineering major at RIT Dubai, has two exhibits. One features a demonstration of mind controlled games, where merely concentration will start a race car, fly a toy drone, or play a game using a brain’s electrical impulses. Those impulses are measured by a headset that calculates the user’s concentration and transfers that value to a computer to which shows the rate of concentration. When the concentration rate is high, the toy is activated. This technology could help those with attention disorders better concentrate, he said. 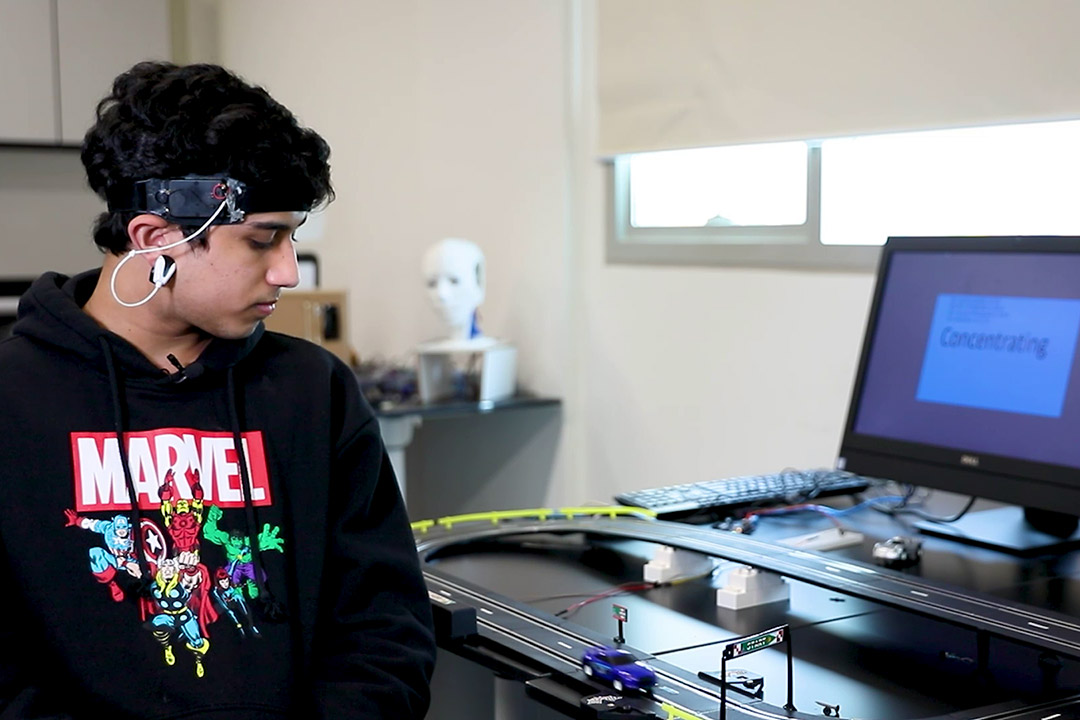 Rishabh Java, a first-year industrial engineering major from RIT Dubai, demonstrates how brainwaves from concentrating can activate a slot car. It is one of more than 250 virtual exhibits to be shown starting Saturday at this year’s Imagine RIT: Creativity and Innovation Festival.

“I like to make things. Especially things that help people,” he said. He said a study showed the average time people can concentrate on something without being distracted is 8 seconds – which is a second less than a goldfish can concentrate.

“We are in a catastrophe where our inability to focus is having a snowballing effect on everything that we’re trying to do,” Java said. “Our devices are progressively reducing our brains’ ability to focus. So there is a need for a tool to help us to regain that ability, something that could help us practice our concentration and our focus.”

“Concentration is a skill,” he said. “So the more they practice, the better they get at it. Think of a brain as a muscle. The more they’re going to exercise it, the stronger it is going to get. Over time, this helps them regain their ability to focus and other tasks they are doing throughout the day.”

Java’s other video depicts his work on a life-sized, 3D-printed humanoid robot that can speak seven languages, has cameras in its eyes that can track and recognize faces, and a wheel base that can be controlled from anywhere in the world. It could be used in situations where it would be too dangerous to send humans.

“I am super stoked to have the opportunity to present my projects at Imagine RIT,” Java said. “I am sure there will be a lot to learn from my peers and I can't wait to interact with students from the global campuses. Also hope I blow some minds along the way—not literally though.”

Another international exhibit, from Josip Vlah, a web and mobile computing major from RIT Croatia in Zagreb, is a Snapchat app that creates a filter for phone cameras to make everything look like Vincent Van Gogh’s Starry Night. It is one of 180 filters Vlah and his company, definition8, have developed for social media platforms for marketing agencies and clients, including the fans for the Korean pop band BTS. His filters have received millions of views and uses.

“I chose Starry Night for the exhibit because it combines art and design with technology, augmented reality, and history at the same time,” Vlah said.

And celestially speaking, there are student exhibits about exploration of Mars, gravitational waves, navigating the night sky, a moon dust rocket thruster, bouncing radio waves off the moon, a virtual reality planetarium, and determining orbiting satellites.

Closer to Rochester, Meghan Britt, a fifth-year industrial engineering major from Fairport, N.Y., is project manager for ConcRIT 2.0, a prototype of a concrete 3D printer. The project is the culmination of a rough draft of a similar project by RIT students last year.

“Concrete printing is relatively new,” Britt said. “They have giant ones attached to cement mixers to build houses, but we wanted to build one on a smaller scale.”

A typical 3D printer uses plastic to print. A concrete printer would cost less than a third of the cost of the plastic, Britt said. “Concrete is a cheaper alternative.”

The multidisciplinary team of five engineering students has worked to adjust the printer to accommodate to the texture of concrete and has been printing concrete lines but plans to print other objects soon. They’ve also developed a training manual so others will be able to use it and make modifications if needed.

“Our project is super cool and my team has spent so much time researching, building, and realizing mistakes and fixing them,” Britt said. “We also had a lot of opportunity to interact with others on campus. I always walked by the Soils and Materials Lab and had no idea what that room was for. They work with concrete, stones, dirt, and all that. So we got to go in there and do some testing.”

Britt attended Imagine RIT as a child and she said it was one reason she wanted to become an engineer.

“I’m so excited,” she said. “I’ve been going to Imagine RIT since I was in grade school. This is one of the reasons I was enticed to stay in Rochester. I can actually use my imagination to create things. Here I am at RIT and feel I can do anything from the skills I’ve learned here and showcase what I’ve created.”

Will McCloskey, a fourth-year new media design major from Boulder, Colo., is one of six students who developed Wishful as his new media capstone project.

Visitors to the website will be able to make a wish by catching a shooting star and making a wish by typing the wish on it. Once approved, their wish will be embodied by a floating generated jellyfish, swimming alongside the wishes submitted by others. Users may browse through other wishes in the 3D underwater space, submit their own, and share wishes they find interesting or inspirational.

McCloskey said they came up with a jellyfish to represent wishes because they are somewhat ethereal and mysterious. “There’s not a lot of preconceived notions about jellyfish and you can watch it move around beautifully as part of a larger group.”

“I hope people will get hope out of it,” McCloskey said. “We’re trying to get a bit of positivity out into the world and trying to express hope outwardly. We’ve all been trapped inside and feeling a bit dispirited.”